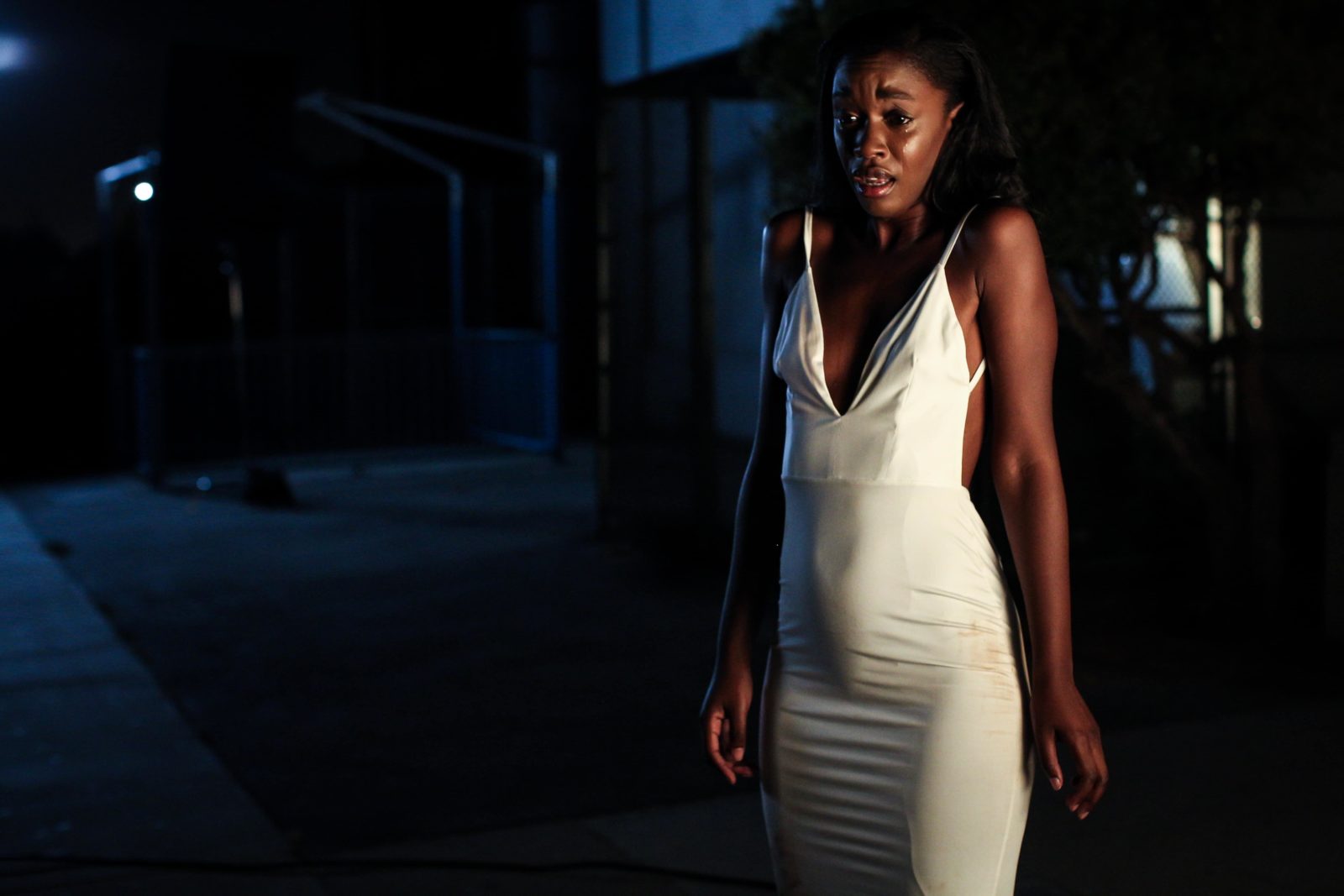 Directed by Dallas Jackson, and co-written by Jackson and Ken Rance, Blumhouse’s new Netflix arrival Thriller follows the group of bullies after Chauncey (also played by Jason Woods) is finally released from jail on their final homecoming weekend.

After a prank staged by a group of kids against their constantly-bullied classmate Chauncey Page (Zachariah Waller) turned deadly, the group blames Chauncey instead of owning up to the accident and their role in it. Chauncey spends the next four years in juvie, as the group of survivors continues to be haunted by that day.

Kim Morris (Pepi Sonuga) lost her twin sister Amani (Bria D. Singleton) on that day when Chauncey accidentally pushed her over a railing as he defended himself. Kim still talks to her sister. And her sister talks back to her, Kim’s voice changing to that of her sister’s, in a nice nod to Hitchcock’s Psycho. Lisa Walker (Jessica Allain) was the one who lured Chauncey into the trap because he had a crush on her, and four years on she has night terrors so bad she needs daily medication. 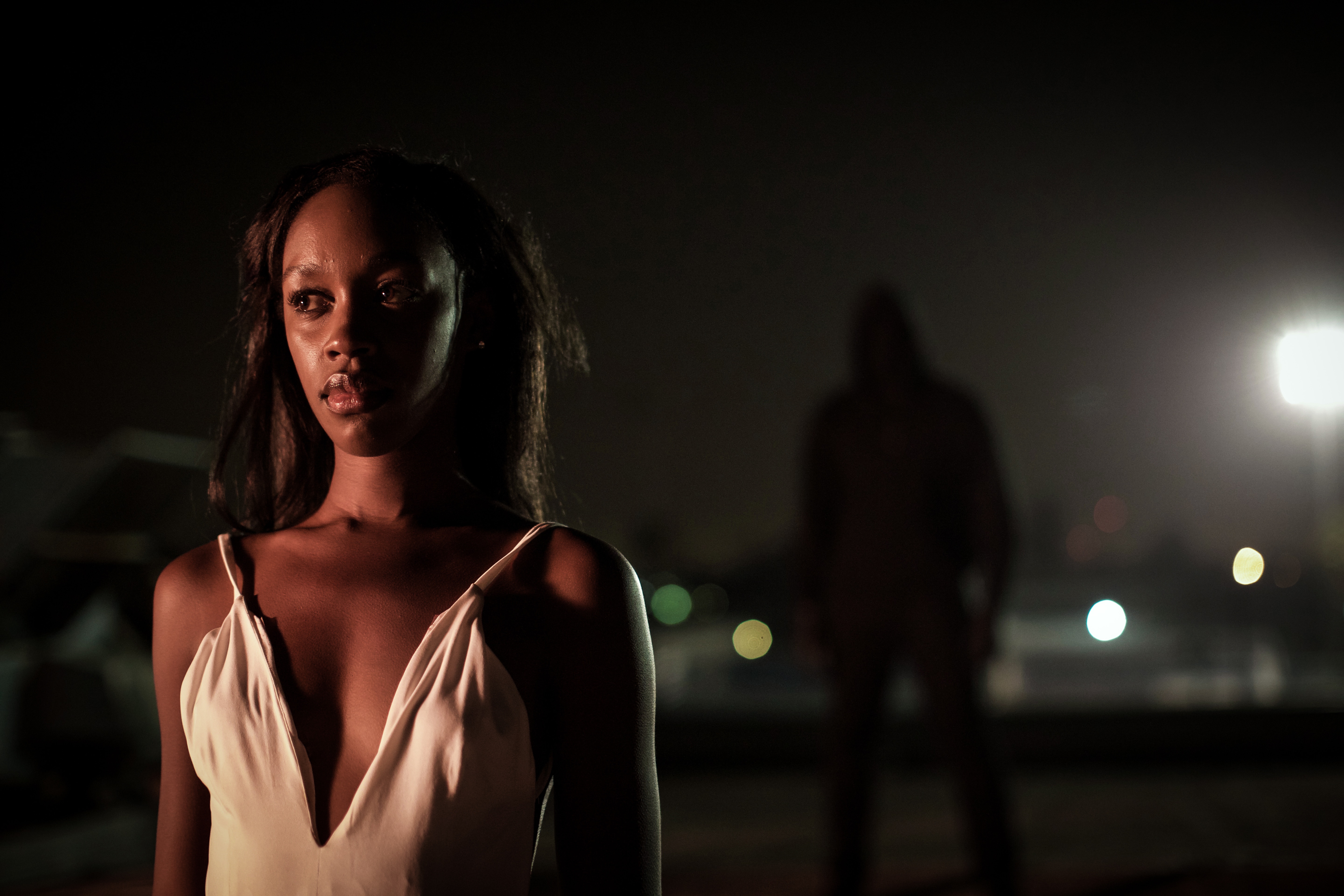 Ty Reynolds (Mitchell Edwards) is a star football player with grand designs to get out of Compton as soon as he can, a dream shared by his new girlfriend Lisa. But Ty’s ex-girlfriend Gina Brown (Paige Hurd), who was also there that terrible day, is not letting him go so easily. After attacking Lisa in the bathroom on finding out she’s going to homecoming with Ty, Gina is banned from the dance. In another apt horror classic reference, as in Carrie, this bad girl teams up with another stand-in villain, wannabe gangster Andre Dixon (Tequan Richmond) to ruin homecoming for everyone.

Tiffany Rodriguez (Chelsea Rendon) and Eddie Gomez (Michael Ocampo) were also there when Amani was killed and Chauncey blamed. They find their relationship strained as Tiffany is actively haunted by that event while Eddie represses those emotions. Ronnie DeBerry (Maestro Harrell), Eazy May (Skipper Elekwachi), and Derrick Jackson (Luke Tennie) are the final three who also bullied Chauncey four years before and inadvertently led to Amani Morris’ death. And each of them has unhealthy coping methods such as drugs and slacking off school. 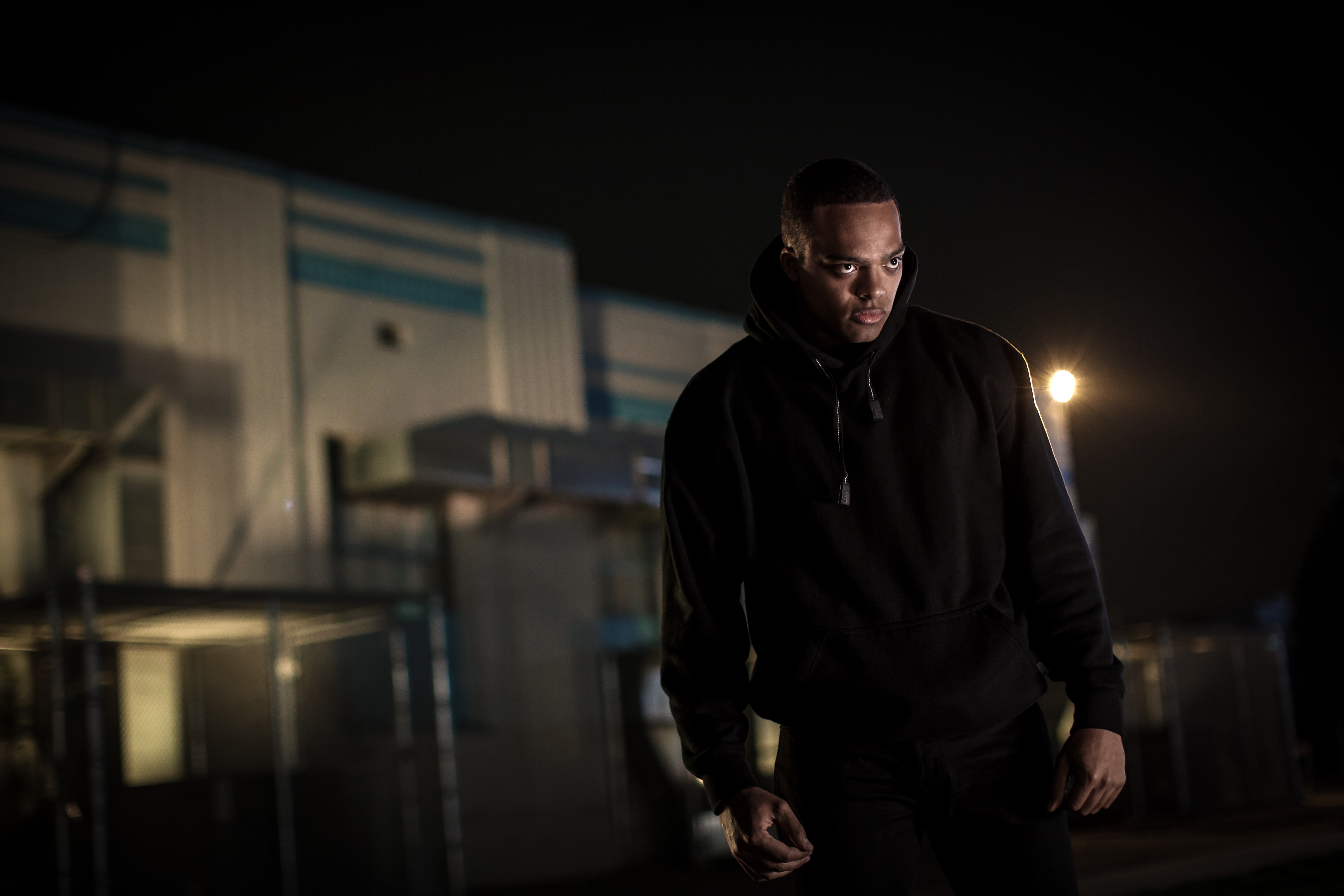 While the trauma of that day has never left any of these nine high-schoolers, when Chauncey shows up around town — even less verbal than he was before and much, much bigger — it is a huge trigger that sets off the group. And when Eazy May and his friends are found dead, Derrick is convinced that Chauncey is enacting his revenge. Derrick’s paranoia is contagious as more of those present on that fateful day are killed by a hulking figure in a black hoodie and full black face mask. The Halloween homage is strong with Thriller, as well as all those high-school slasher films we loved to deconstruct in the 90s. What is different here is instead of a suburban setting with a mostly-white cast, Thriller is set in Compton with much of the action taking place at Compton High School. And there are no white folks in Thriller. This is a solid installment in the Black horror genre.

As refreshing as it still is to experience a horror movie with an all-POC cast, unfortunately, Thriller was a bit uneven in the production department. It has moments of all-out jump-scare horror and gory deaths. But there is also a campy vibe that some of the actors didn’t quite get as they took their roles very seriously.

Some of the social commentary in the film, while vital in theory, is presented as awkward exposition in Thriller. When Derrick explains to Ms. Cruz (Valery M. Ortiz) why his grades have dropped, and when wealthy Andre who lives in Baldwin Hills details why he plays hard at being a thug, it’s a bit like being hit over the head with the killer’s metal pipe. These scenes could have used some finessing and nuance that would have deepened these discussions about race and class rather than feeling like a Cliff Notes version.

Also problematic is the framing of a Black man in a hoodie terrorizing a neighborhood, school, and bunch of young kids. I couldn’t help but think of Trayvon Martin and how Black men in hoodies are actively demonized and subsequently murdered by police or others because they feel threatened. Thriller feeds into this deadly stereotype, and especially as the killer is presented as a faceless and animalistic stalker who dispatches each person with cold precision. Now, if the killer had turned out to be white, that would have been an entirely different level of social commentary. But since there are no white folks in Thriller, we weren’t so lucky. 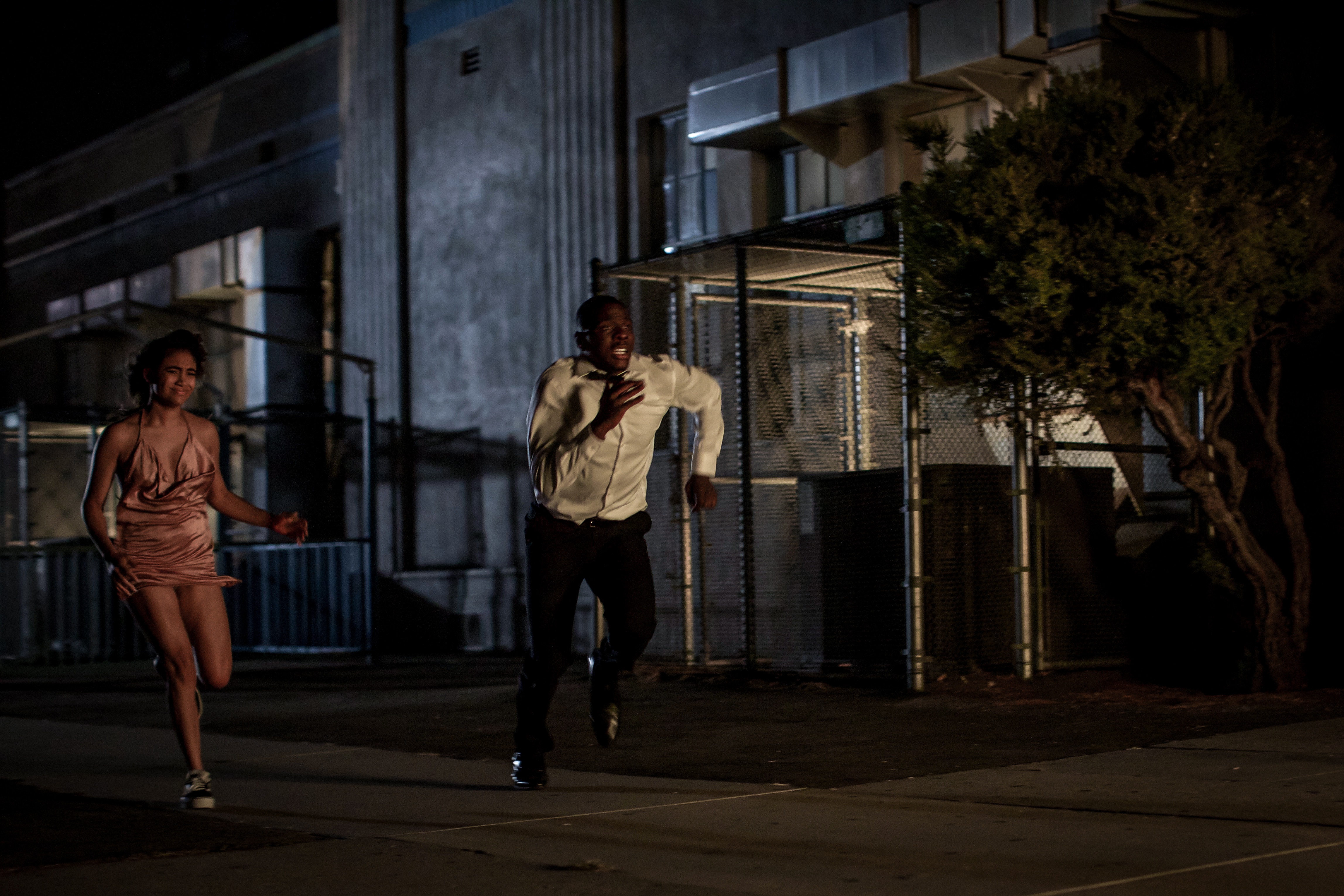 But what Thriller does really well, is challenge the stereotypes about people who have spent time behind bars. Chauncey’s return is met with the same kind of bullying that put him in prison in the first place, only now he is much bigger and stronger. He also becomes an easy scapegoat for people in the neighborhood. We also have the opportunity to see the physical scars that cover Chauncey’s body after his four years in the system, all because a group of kids pinned an accident they orchestrated on him. It’s a heartbreaking moment.

Along with Prom Night and Halloween, the Carrie vibes are strong with Thriller as themes of bullying, abuse, and revenge take center stage. Gina even douses prom queen Lisa’s white dress with red Kool-Aid in retaliation for “stealing” her boyfriend and getting her banned from the dance. The twist at the end, however, sets Thriller apart from the films it was clearly inspired by. I was so caught up in those aspects I didn’t even see the ending coming. That is a feat and a half in my book.

And I also have to mention that the lighthearted moments in Thriller are laugh-out-loud funny. Principle RZA, I mean Principle Hurd (played by RZA) has great comedic timing and I’d love to see him extend his range into that genre more. Also, each of the bullies has really adorable parents whose banter brought a lot of levity to this dark story of death, murder, and retribution.

All in all, Thriller is a fun horror film with a unique locational and casting paradigm we need to see more of in horror films. The soundtrack and score are excellent, and the ending was aces. I guess horror fans will have to take a quick break from Shudder and head over to Netflix to catch this one. Thriller is a unique addition to the high-school slasher genre that brings a lot to the table. More horror films with all POC casts, please. It’s remarkable how different an experience these kinds of movies truly are with regards to representation and inclusion, especially in a genre that has historically used POC as props or worse.