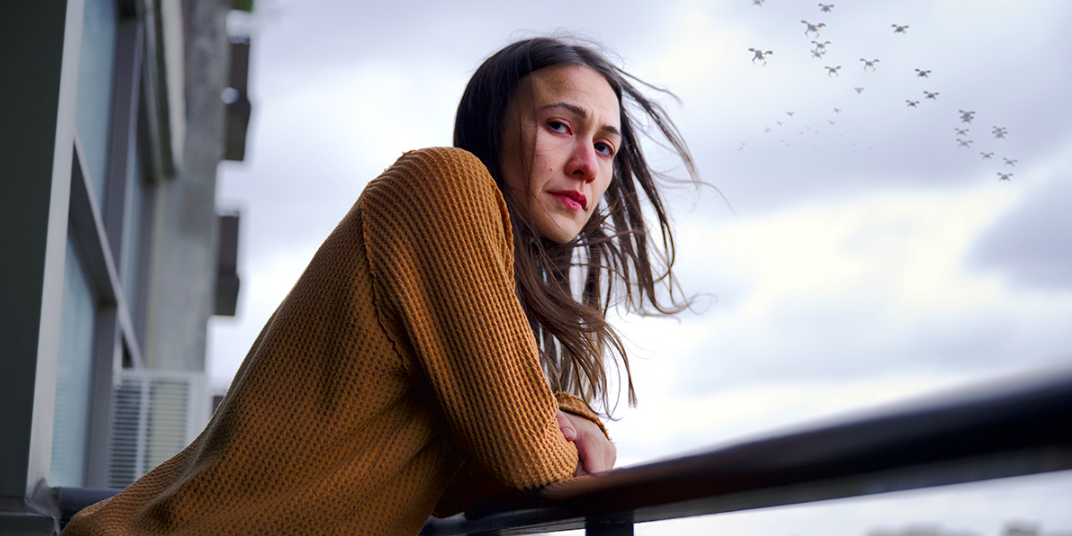 Set in a future postwar dystopia, Night Raiders is more than a science fiction piece. It is a commentary on a painful past and present. It is a not-so-subtle reminder that history repeats itself.

Drawing on Canada’s colonial past, the director and writer of the film, Danis Goulet, makes a statement with her debut feature film starring a cast full of indigenous people speaking her language, Cree. The film had to issue a disclaimer beforehand, stating that the film contained scenes that may distress some viewers who have experienced harm, abuse, violence, and/or intergenerational trauma due to colonial practices. After learning that, it’s hard not to watch the film through that lens. It’s equally hard to watch it through that lens without feeling the struggle or at least acknowledging it.

Like all great dystopian films, Night Raiders is set in the future, 2043 to be exact, where a war has destroyed civilization as we know it. A military has occupied territories and seized control of society. One of the regularly enforced rules is children are treated as property. The military takes children from their families and puts them into state academies, which are basically forced education camps.

For 11 years, Niska, a Cree mother, has been able to keep her daughter, Waseese, safe and away from the droids that fly above. But one day, events beyond their control force Niska and Waseese apart, landing Waseese in a state academy. In order to get her daughter back, Niska must join forces with a tribe of vigilantes before it’s too late.

Night Raiders takes the concept of forced assimilation of Indigenous children and people in Canada, the United States, Australia, and beyond, and gives it a science fiction flair. From its production design, to its cinematography, to its dialogue, Night Raiders allows for a full immersion into this fictional world. It’s a slightly more digestible way to talk about heavy emotions that usually accompany the topics of trauma, racism, violence, child abuse, etc.

The film is a Canadian history lesson of sorts, but it also led me to look at my own country (United States), where we currently have our own muddy present. Back in the day, there was the forcible removal of Indigenous Canadian children to residential schools, where their connection to their culture was literally tortured out of them. Actions like this have been happening to Indigenous children all around the world, including those currently on the US border with Mexico.

The acting in this film was solid. I believed every action taken, every word spoken, and every look the characters gave each other. It helps that the majority of the cast are Indigenous people. Watching the film, I could see the strength and discipline behind each scene. The two actors who did it for me were Tailfeathers and Letexier, who played, respectively, the mother and daughter of the story. They truly magnify the emotional center of the film. There is also a commentary on motherhood and what family means. The lengths a mother will go to for her daughter are endless. Themes of sacrifice come up a lot. What would you sacrifice for your family? Your life? Your happiness? This female-driven film is executed very well. I was invested in these characters throughout. Niska is the reluctant hero.

One noticeable thing was the amount of walking done on screen. Niska was constantly walking. I really believe that was intentional as a way to highlight the land and make the audience remember the land we came from and the strength it has provided different groups. It was definitely a shout-out to those who came before. The land became its own character. There was nothing too fancy about the nature shots. There were no lighting tricks. It looked raw and real, like you could go into a forest and find everyone sitting there ready to save some children.

Goulet not only directed this thriller but wrote it as well. You can tell she put a piece of her heart in there. She took what she knew and combined it with what she loves. The result is a wonderful work of science fiction that will attract the best nerds. The dialogue flowed well. There was lots of Cree spoken on screen, which I had never experienced before. That also played a part in how immersive this experience was. The pacing was great. Everything moved so well that all the way through to the end, I had no problem suspending my disbelief.

Goulet truly is a skilled and smart filmmaker. Maybe next time, she can have a giant budget so the visual effects can be at her level.

Currently screening at TIFF, Night Raiders does not yet have an announced date for a US release.