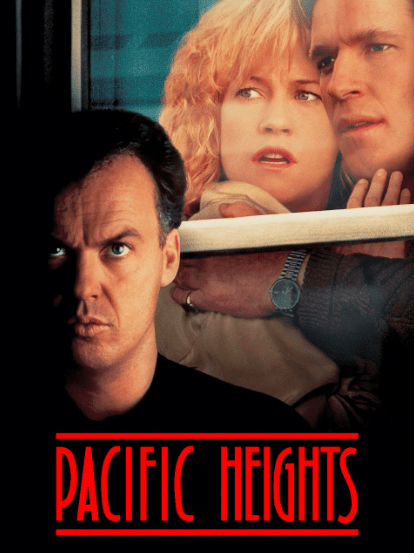 As the social side-effects of COVID19 include mass evictions and an updated knowledge that landlords are opportunistic vampires, it was weird timing that John Schleshinger’s 1990 landlord horror drama Pacific Heights has been popping up on cable television of late. Unlike the landlords who are kicking people out of their homes during a pandemic and new Great Depression, Pacific Heights follows Patty (Melanie Griffith) and Drake (Mathew Modine), an unmarried couple who decide to buy an incredible but run-down Victorian in San Francisco’s posh Pacific Heights neighborhood.

While Patty and her boyfriend can’t exactly afford the property, the investment is too good to pass up, and their plan is to rent out units to help cover the mortgage. Patty is an incredible D-I-Yer who begins restoring the house to its original beauty in no time. Unfortunately for the couple, they open the door to a wealthy conman Carter Hayes (Michael Keaton), who proceeds to not only ruin their property, but also their finances as he steals Drake’s identity and eventually turns to attempted murder in order to get what he wants from Patty, Drake, and beyond. Carter uses a legal loophole in California that prevents Patty and Drake from evicting him, especially after Carter manipulates Drake into physically assaulting him on a number of occasions.

There is a lot that has majorly dated Pacific Heights in the 30 years since its release, the main things being a lack of cell phones, as well as no internet or computers, which would have made Patty and Drake’s situation completely improbable by today’s standards especially when it comes to access for background checks. It is fun, though, to watch the analog ways that Patty uncovers Carter’s shady past: from tailing him and writing his license plate down in a notebook to the lo-fi way she gets Carter arrested for credit card fraud. People had to be really clever back then when investigating someone, and the fact that it’s Patty who takes charge of the situation was a rare and badass feminist move back in 1990.

Yet, as disturbing as the things Carter does to Patty and Drake are—one of the worst is when he fills the house with cockroaches, which pushes the thriller straight into horror movie territory—there is an aspect to Pacific Heights that remains painfully evergreen: the implicit anti-Blackness of landlords and the rental industrial complex.

You see, there was another prospective tenant who looked at the apartment Carter eventually demolished, a Black detective named Lou Baker (Carl Lumbly), who is instantly on the defensive as he discusses the application process with Patty. When Patty tells Mr. Baker they’ll need to do a credit check, Baker assumes she’s microaggressing him because he’s Black, until she reassures him he’s at the top of the prospective renter list seeing as he’s the first to view the place. “I just get the runaround so much, you know?” Baker tells her, and it’s unclear if Patty as a white woman actually does understand what Baker is talking about. Baker takes an application with the promise he’ll bring it back ASAP.

But later as Patty tells Drake about Mr. Baker and how much she likes him as a potential tenant, Drake’s negative response is as shocking now as it was 30 years ago:

“Maybe he’s one of those minority scam artists,” Drake seethes.
“What are you talking about?” Patty responds, confused.
“They…they try to get you worried about discrimination, so you don’t check their credit,” Drake scoffs.
“That’s not what happened,” Patty insists.
“Some of these people can be pretty shrewd, Patty.”
“How would you know?”
“It’s not a racial thing. It’s just common sense,” Drake says, confirming that he simply doesn’t want to rent to a Black man.

Sadly for everyone, Baker’s application gets lost as new tenants move into the Victorian, but it’s really hard to feel sorry for Drake once Carter Hayes shows up. We see in living color how Carter manipulates Drake by flashing wads of cash around with a promise of thousands more that he never fulfills. Carter gives Drake a gonzo story about working for a private trust whose name he can’t reveal, and as Drake tries to confirm the basics of Carter’s identity over the phone with bogus contacts Carter used to placate him, Carter had already wormed his way into the apartment and there was no getting him out. Drake had ranted about “minority scam artists” not wanting to fill out an application, but really who screwed him over was a “majority” scam artist and Drake fell for his shtick hook, line, and sinker.

Drake’s racism gets even uglier. His supposed best friend Dennis (Dorian Harewood) is a Black man, someone who helps him a lot in the film, going so far as to loan him thousands of dollars and letting Drake stay with him when Drake gets kicked out of his own home by the interloping tenant Carter. Dennis surely wouldn’t have been so quick to help Drake if he knew what Drake really thinks of Black people. In a moment of perfect irony, Patty has to go to Detective Baker for help in dealing with their horrific tenant situation, prompting him to pointedly side-eye and summarize, “I guess you’re wishing now you’d rented to the Black man.”

After three whole decades since Pacific Heights hit cinemas, this kind of rental anti-Blackness is still wickedly pervasive in America. We see anti-Blackness in Pacific Heights specifically; Drake’s other tenants are Japanese immigrants, one of whom speaks no English, and when they break their lease, they suffer no consequences other than losing their deposit. This likely would not have been the case had the tenants been Black, if Drake had allowed them to live on his property at all. As other kinds of rental services such as airbnb and the like have emerged thanks to the internet, rental racism has extended its ugly claws even onto those platforms. Hell, some rideshare services that only involve a pickup and dropoff have shown implicit bias against even giving Black folks a simple ride. This is trickle down and around racism that particularly affects Black folks and affects quality of life on basic human levels, like the right to simply apply to live wherever they want and be legitimately considered.

Pacific Heights is a remarkable snapshot of how far America has traveled in 30 years when it comes to technology and access to information services; what Drake and Patty do to confirm facts can be done in a matter of minutes with an internet connection now. But Pacific Heights also serves as yet another heartbreaking reminder that three decades later, housing discrimination against Black folks particularly continues to be an American social problem that as a society we are not even close to resolving.