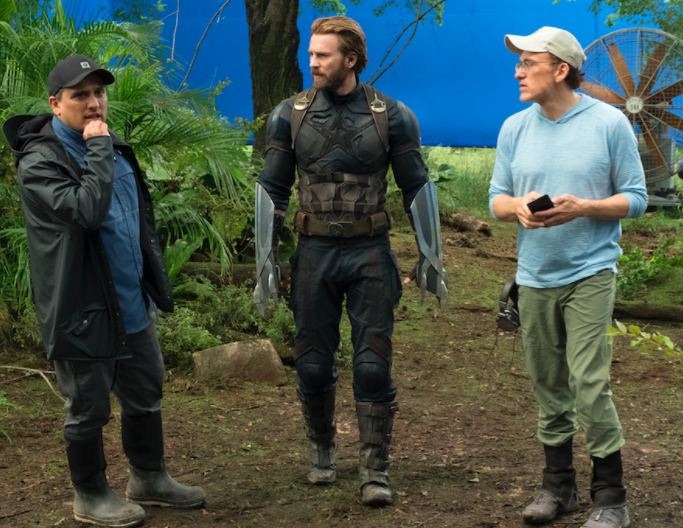 On our set interview of Avengers: Infinity War, Chris Evans, and Scarlett Johansson are paired off together.  Chris talks about the shift in Cap’s leadership and Scarlett explains why Black Widow went blonde for this film.

Chris, last time I saw you, you were not an Avenger and it looks like, from what we saw today, you were puttin’ the team back together.

Chris: I was not an Avenger, meaning in Civil War?

Chris: I don’t know…if I would necessarily say that this is…a group of Avengers, you know. Just circumstances have, you know, dictated that people come together, you know. Yeah, I think that’s innocuous enough, that’s safe. It’s not incriminating.

Chris: In this film, I think, you know, I think intrinsically Captain’s the leader but since there is no technical, Avenger’s structure…well God, I don’t know if I can even say that…

Chris: I think he’s still…he’s still a leader at heart, you know. I just don’t know if he necessarily has, you know, the same chain of command that he had in prior films.

Has Black Widow sort of been a part of this underground group or is she, like…between the events of Civil War and Infinity War, has she been on her own mission?

Scarlett: Between the events of Civil War and now, Steve and Natasha have been together. That’s how we imagine it. They’ve been sort of flying under the radar but still taking care of business in the way that they know how to do.

And I think, you know, when we find them in this film — as it was explained to us by Joe and Anthony — they’re, you know, they’re just a fine, a well-oiled machine. They sort of have a seamless communication between them. But they’re more hardened, I think when you when you are working underground for such a long time and when you’re sort of fighting for something that you know is important but is not being really recognized or supported by a larger organization or even, like, society as a whole, I think that it takes a sort of toll on you. So, it’s kind of where we find them.

Is their relationship still just platonic?

Scarlett: We have had a little bit of a taste of what’s coming. So, I think we have a different perspective, a little bit. I think that one thing that they share in common is they don’t make decisions, like emotionally, especially I think Natasha. They have a little taste of what is coming and they’re wary of what they’re up against.

The title says that they battle this Infinity War but also does that continue your feud with Tony from Civil War? How the film balances those things as he balances them?

Chris: What can I say? I think Captain was apt to compartmentalize, you know. I’m not gonna speak to what the film addresses, but in terms of my character, I think he is slowly becoming disillusioned as he gets older. Every single movie, he learns a little bit more that the world isn’t the way that he kind of wants it to be. And I think that’s why there’s a connection between him and Black Widow.

Black Widow’s seen a lot more than he has and is kind of a little more callous. And I think, in a lot of ways, he looks up to that, learns from that. You know, first it was kind of hierarchy of a kind of government structure that fell apart. And then there was a friendship that kind of betrayed him or abandoned him, I should say. I think that when those things happen, it’s like a destruction of a belief system to some degree and you kind of can be a little cold as a result. And I think, you lean on people that have, you know, walked familiar paths and there’s no denying that Black Widow has certainly faced a lot of those challenges.

I think, like I said, long-winded answer. I think he’s compartmentalized it enough to put it as a lower priority than what’s at hand which is obviously now.

Scarlett: I mean, I don’t know that I have any particular emotional reaction to him. I think our characters, after encountering all that we have, whether it was Ultron or you know, any other kind of, like, psychopathic person or being or you know, it’s my character, in particular, is very strategic and it’s not something that she can necessarily like wrap her head around. I think we’re a little bit blind going into this. I don’t know that we necessarily know, we are wary of what we’re up against, but it gets very abstract.

Chris: I think it’s just some of these worst fears come to reality. I think the first time the sky opens up and aliens pour into the city, you kind of realize well, that’s a possibility.

And we handle it this time but who knows how powerful these people can become and I think this is kind of the worst-case-scenario where you find out all the potential of someone trying to destroy your planet and how that can be.

Scarlett, I can’t help but notice your hair’s blonde. What’s up with that?

Scarlett: Yeah, well I think you know, Joe and Anthony really wanted our characters to kind of feel like it had just been a period of time when we were both sort of under the radar, just like different. I think that my hair is sort of signature of Natasha, they just wanted us to look different. And so, for me, I kind of thought, “Alright, well maybe I kind of give it a kind of like wink and nod to like the other Widows’ kind of story.

What can you say about the wear and tear we’re seeing on your suit right now?

Chris: I dropped the shield, essentially, you know. And I kind of went rogue a little bit. But again, I think it’s in his nature to be of service. And I think, to some degree, in order to maintain sanity, he had to kind of function within a system. That’s how his brain works, there has to be some sort of functioning factory that he can operate within. And I think, Black Widow to some degree probably has a similar output and I think now they lean on each other, especially in the face of that kind of loss, comin’ off of Civil War.

And so he’s been, you know running these missions, answering to nobody really…I mean it really is the sign of rogue but yeah, that’s the way I get it.

So, in this movie, we see the return of Banner to, at least the circle, if not to the official Avengers. I’m curious about the reunion between Natasha and Banner. What can you tell me about their relationship in this film?

Scarlett: Well, I mean, it’s been a long period of time. And again, I think Natasha’s not a particularly sentimental person and I think she understands that it’s been a period of time and they’ve both been through…you know, they’ve both had their own experiences separate of one another. And we will always have, like, a shared experience with one another but you know, again, a lot of time has passed.

This heroic decision the last time that they saw one another that they were going to kind of sacrifice their own personal desire for the greater good and that’s, you know, how they move on.

Chris: I don’t know what I can say without giving something away.

Scarlett: I mean, there’s a lot…this film is really plot heavy, there’s just a lot coming…a lot of people coming together, a lot of universes coming together. I actually think that, in some ways, there’s not a lot of time to have feelings about what’s going on because we’re facing the greatest threat we ever have.

Chris: Yeah, very consuming. It’s like a big game of chess and this is just one move in a very long game. So, it’s tough to kind of carve out individual, fleshed-out arcs that…that would be worth discussing beyond the own actor, you know, the individual actor’s process. It may not show up on screen the way we would explain it.

With all these characters coming together for the first time from all different universes and the biggest threat ever coming here, what are you guys most excited for fans to see? I don’t know, character interactions or action, whatever it is.

Chris: Sure. I think just the nexus of all these different films, you know. It was fun with Avengers bringing, you know, all these characters to life but these weren’t, they weren’t all separate threads, you know, characters that have had their own separate adventures. I don’t think this has ever been done before where you have so many different franchises coming together to kind of really try and make one stew. Like I said, Avengers was pretty ambitious but this really blows that one out of the water.

What is the relationship like for both you and Tony at this point?

Chris: I don’t think either one of us wants to hold grudges. I think we operate in a very binary, utilitarian, you know, approach to most things we do and I don’t think we let emotion dictate our reality. It’s been a couple of years so I think we both, to some degree, not moved on but maybe buried some things.

Playing Captain America, we’ve seen a pretty interesting development in politics. I’m curious what it means to you now to play Captain America in this environment.

Chris: I mean, it’s certainly a tricky environment, we can all agree on that. Everyone’s very, you know, polarized and very divisive. So you know, I guess it’s nice playing a character that does his best to not let his political bias dictate his choices. Because I know I’m certainly guilty of doing that at times. I think we all are and it’s tough to know how to behave when it feels like the rules have just been blurred on both sides. Things that shouldn’t be affected are and that can make everyone’s compass a little wonky. And it’s nice to play a character that has a very austere approach to morality. I don’t know, it’s comforting, I suppose.