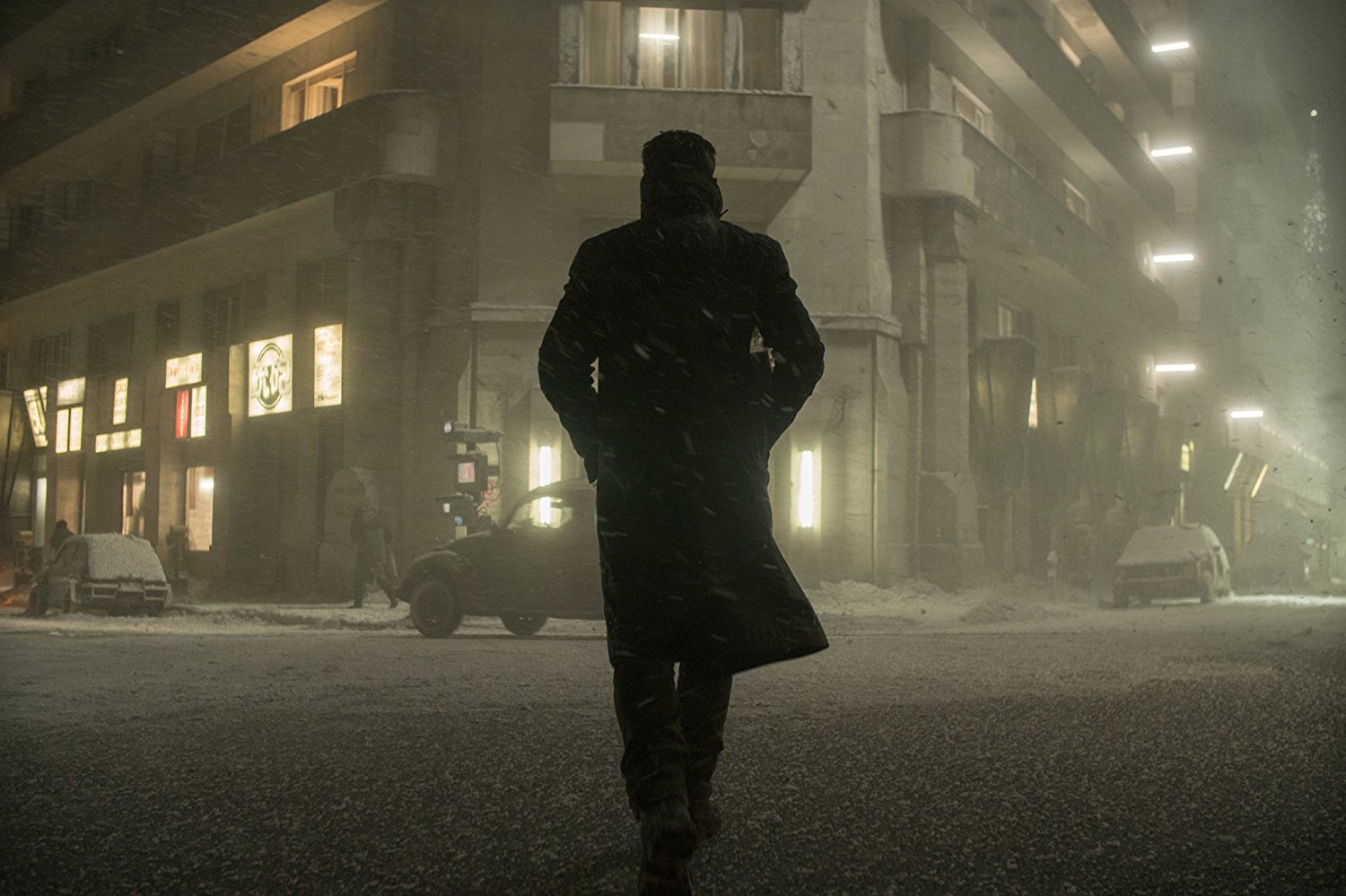 I thought myself prepared for Blade Runner 2049. I fully expected that opening crawl text, images of spinners and neon noise cutting neo-LA smog, all that stuff, the sort of easy stuff. But a part of me was deeply worried. The part that is preoccupied about what sequels mean, and what sequels mine. How they journey into that precious substance, treating it like an ore deposit, or otherwise just a medium to pass through, rather than a material monolithic and solid, while also sort of dead and intractable.

It’s possible that Blade Runner is my favorite film of all time. It must be the one I have seen the most times, more than even Withnail & I or Big Trouble In Little China, two conspicuous home-sick-with-the-flu favs. But my appreciations of the film have shifted throught my life, much like the C-beams glittering in the dark near the Tannhäuser gate [every Blade Runner article needs one callback, I’m getting mine out early]. As a child, it was a bounty of visions and foggy, menacing urban ruin, something I was attracted to on an elemental level. I probably couldn’t tell you what it was about, back then, being primarily awestruck and moved by its aesthetic qualities, although the violence disturbed me slightly.

Later on as a teen, after having read the book and much of writer Philip K. Dick’s work, I approached Blade Runner as a sincere disciple annoying everyone in earshot. I obsessed over the ending and the Deckard-as-replicant theory (I’m a supporter, btw, but I welcome anyone’s beliefs on this matter) and salivated over singular lines in the film’s gaunt script, each of which are so carefully delivered during the briefest possible performances. In fact, I have a weirdly intense affection for that first blade runner to be disposed of in the opening of the film (his name’s Holden, shhhhhh), even though he shares less than two dozen lines total (approximately 200 words, actually, shhhhhh). Every detail of this character—his sighing boredom, his professional courtesy but distracted, slight condescension to the proposed replicant seated in front of him, the casualness with which he smoked his cigarette and how different it seemed from Rachel’s performative nicotine flair in a later scene—communicated worlds to me, even though you never formally meet him again (or, in the first place).

The world of Blade Runner often focuses on formality, bureaucracy, poised cruelties. The Voight-Kampff test by which blade runners interrogate their marks is sickeningly formal, being an oral exam with the potential to end in state-sanctioned murder. This and several other ideas from Dick’s original novel are the main fulcrums on which the story can swing, but the filmmakers approached the philosophies and grander themes of the book with their own unique take.

Blade Runner 2049 is a gargantuan, ambitious, ponderously swampy sci-fi epic, an existential noir replete with mystery and eye candy, social criticisms and frustrations, and stunning smoky images. It has vice and despair, an unreliable narrator, surprise guests (in addition to the one spoiled in the trailers and posters; god that would’ve been a wonderful secret to keep until a first viewing), and overly theatrical character performances. It’s poetic, daunting, always slowly paced. The bombastic soundtrack this time usually detonates instead of sears, and the run-time might test distracted seatmates who are not firmly in its camp to begin with. It’s longer than the original at 163 minutes with a comparably minimal dialogue ratio in its script, or at least feels that way. It’s also an impressive accomplishment in modern sci-fi in general, and sequels in particular.

Ryan Gosling is a replicant LAPD officer nicknamed K—hopefully this isn’t a spoiler, but it’s revealed in the first few scenes—who’s tasked with “retiring” other remnant replicants. I could write an essay on this idea alone, that language in the fictional world of Blade Runner is incredibly important and reality-warping on its own, similar to ours; the Voight-Kampff uses it in part to determine someone’s secret identity as a replicant, the word “retiring” is used instead of “murder” in order to more effectively dehumanize these replicants, and Batty’s life ends with a meditative, infamously improvised poetic soliloquy. The crisis of replicants in 2049 is entirely different than it used to be, and the models that the film is concerned with don’t even require an elaborate test, and are instead beaten into submission so the officer can then confirm a serial ID number on their eyeball. The eyeball is then, sickeningly, removed as a sort of trophy, a piece of evidence or proof of collection.

The nuance and “art” of the investigative career is now gone. The “good” news is, that means anyone can do it, even another replicant. It’s just a mechanical task, sort of like the new Voight-Kampff-like system of numbingly repetitive language prompts which are delivered to K daily to confirm that he hasn’t gone “rogue” (read as: “human-like or willful in any manifest way”). The questions were once used to interrogate an emotional response, but now they demonstrate its presumed absence.

Strangely, though, K is not a machine that can merely be stored on a shelf and powered down til the next morning, but a human-ish individual who returns to an apartment home and interacts with a virtual AI wife for succor (with a creepily subservient but remarkably complex performance by Cuban actress Ana De Armas). He drinks alcohol (does this do anything for him?), seems to get involved and interested in his work, and generally exists submerged in a patchwork of copious illusions, seemingly ignoring the epithets (“skinjob”) graffiti’d on his front door or routinely barked in his face.

As usually happens in film noir, detective stories, and sci-fi films that interrogate the legitimacy of assumed truths, little pieces of the illusion start to peel away. As they dissolve, new secret routines emerge, alternate pursuits. Deceptions, sacrifices, and powerful men take center stage. One such important man is the blind corporate CEO Niander Wallace, the figurative heir to Tyrell, whose own coup on the business of artificiality emerges in the wake of his predecessor’s failures and misjudgments. An enjoyable but clenched performance by Jared Leto is assisted by the character’s scarcity, and the man in the high castle has noticeably less screen-time than trailers imply. While I appreciate his performance here, I like that he’s rarely shown; instead, we spend more time with his replicant enforcer Luv (Sylvia Hoeks, sullen and superbly baleful).

The strangest and most surprising thing about the movie is how beholden and drooling it is to Scott’s, while somehow building on the original’s mysteries instead of spoiling them. The central ones presented here are defiantly different, though, and so some themes are abstracted and redirected. Where the original had a more prominent focus on eyes and vision—even Batty’s own humanity is defined/justified by what he’s “seen”—this one affixes to contemplations on the internal workings of the body, on breathing and drinking and eating and bleeding. Niander is apparently brilliant, and even utilizes technology to surpass some of his obstacles, but he’s also a failure with key achievements that languish inadequately in Tyrell’s shadow. Where Tyrell may have been the misguided fatherly genius, Niander is crueler, with a kind of toxic or predatory intelligence.

Many details, like the dispensing of the iconic Voight-Kampff test for the retirement process, communicates Niander’s era as one that has become more brutish overall, a world where relationships are less important than violent, humorless, emotionless efficiency. Why pursue a partner, when you can instead purchase one, or even just the ghost of one? Why spend valuable corporate resources on figuring out if someone is a replicant when you can just pummel it out of them? Why duplicate the memories of your niece to implant in a replicant when you can just craft them from whole cloth?

Interestingly, the least subtle aspect of the film is its score, an intense, frequently explosive series of robotic wails. There is rarely any whiff of Vangelis here that I recognized on first viewing, besides the reliance on synth instruments, and the industrial battering further establishes the modernity of the film, the new “impossible” civilization goalpost looking at 32 years down the line. It will be louder then. More expeditiously organized. Bloodier and deadlier. We won’t have the imagination to lounge at the noodle bar shoulder-to-shoulder in the rain in 2049; we’ll be slack-jawed at home, consuming illusions with other illusions perkily cooing alongside us.

The themes and questions that lie at the heart of the film all-but-insist on repeat viewings, though I left the theater buzzing, knocking around the less obvious moments best I could. I think it’s a fairly unconventional story, but a mostly conventional noir story in a lot of ways. This means that, rather than an ensemble cast who all experience relatable character growth as the events run, it mostly centers on an investigator and a series of conversational scenes. This might not be what a person wants from a movie, and I wouldn’t really fault them that.

I’d also wager that Blade Runner 2049 is even more focused on women—and I’d also posit that women characters suffer in noir the most—in interesting and spoiler-rich ways that I’ve been careful to avoid. I definitely welcome feminist criticisms of the film, and although some of the gender representation in it is certainly tropey, I don’t think it’s as cut-and-dried as might first appear. Where the original has the much-lauded, disturbing (but non-explicit) rape scene, for example, this one has a stunningly bizarre (also non-explicit) sex scene that combines consent, financial transaction, property/ownership, and fantasy into something memorably intricate and haunting.

I cannot wait to dive deep into the philosophical treatments, write-ups, and paranoid breathless diatribes online (whether I agree with them or not), and genuinely believe that the new film often enlivens or enriches some of the mysteries in the original; whether this goal could hardly be considered necessary, I welcome it all the same. I still remember how nervous I was in my seat, considering my personal history and growth with its predecessor, but Denis Villeneuve & co. have constructed a follow-up of such satisfyingly detailed echoes, while still managing to retain an identity unique from the shadow under which it thrives. This might be Blade Runner 2049’s greatest achievement.

Review: ‘Morbius’ is a Surprisingly Good Movie on Health Privilege