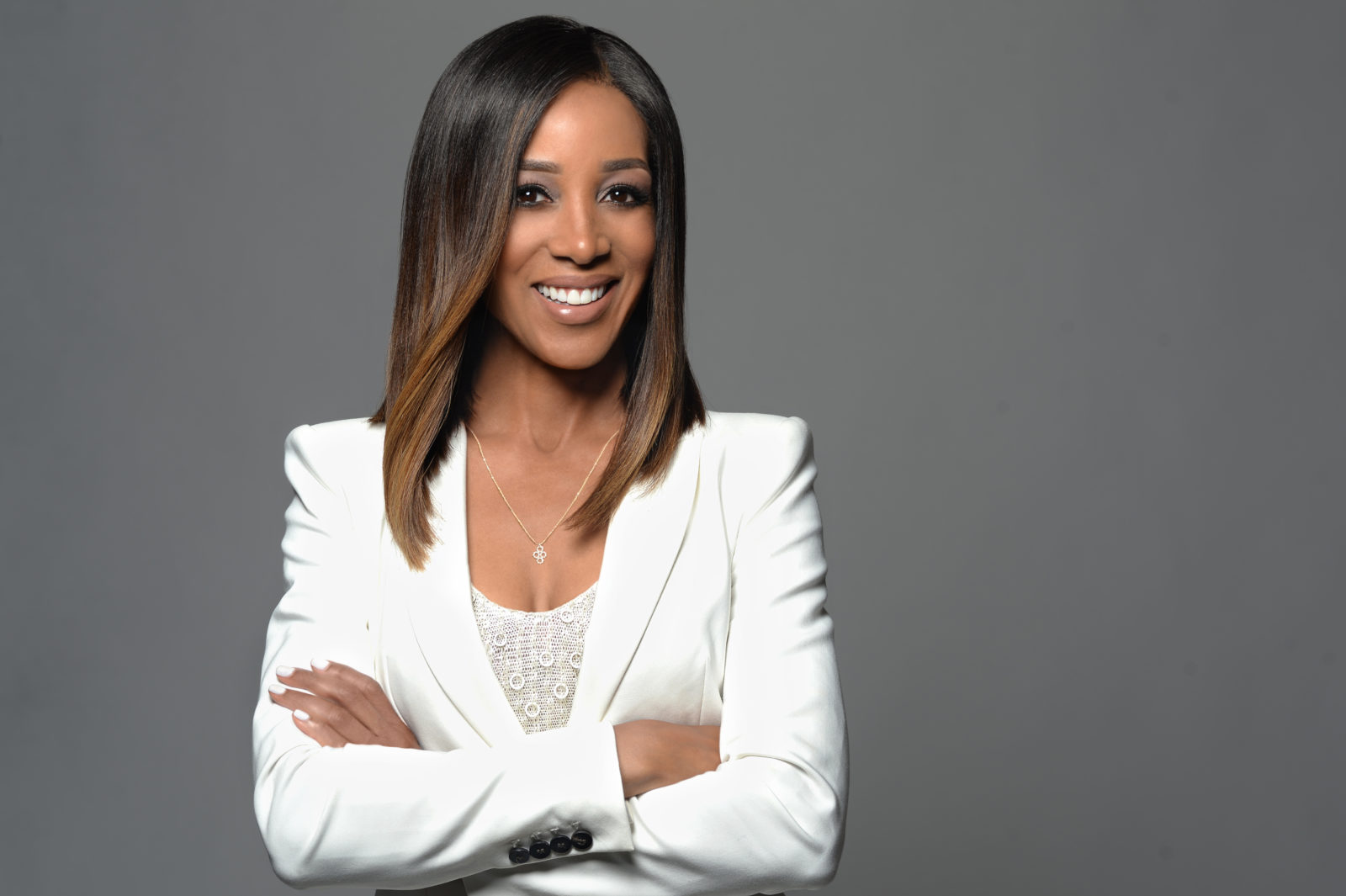 Shaun Robinson was a fixture on the red carpet for Access Hollywood and one of the few on-air (yep, so retro now) faces of color in the early aughts in Los Angeles. After years of couture gowns at award shows and chatting with A-listers such as Brad Pitt, Angelina Jolie, Tom Cruise and Halle Berry for the camera, the Emmy-Award-winner left the TV show in 2015.

With just a few years away from the spotlight (although not away from working, including a stint with TLC’s 90-Day Fiance and her philanthropic and charity work), she seems to have found her niche in producing. She recently signed a production deal with Lifetime and will be working with renowned Pastor TD Jakes. Black Girl Nerds spent a sunny morning catching up with Shaun just after a small earthquake in Los Angeles. This and other deets below.

So, there was a small earthquake last night in Los Angeles and you tweeted you were ok, what’s your experience with reporting earthquakes?

Being from Detroit, I had never experienced an earthquake before moving out to Los Angeles. If there is ever a moment of feeling a lack of control, an earthquake is definitely that moment. Since being here, I have experienced about five tremors, thankfully that didn’t do much damage in the area that I live in, however, I am certainly heeding the warnings by the experts that “the big one” is coming!

You were on air and on the red carpet for Access Hollywood for so long. Was there a defining moment for you after 16 years when you thought, ‘got to make a change?’

You know, someone told me that I was at one entertainment show longer than anyone other than Mary Hart! That just blew my mind! I started at Access Hollywood back in 1999 – before Facebook, Twitter, YouTube. That box has certainly been checked! Access Hollywood gave me a wonderful platform and I’ve met so many incredible people. But, beyond that, it gave me the ability to touch people’s lives in various ways – including the launch of my foundation.

So many people want to do what you did so well; be on the red carpet and at parties interviewing stars, what do you tell them?

I would like to think that the reason I have had the longevity that I have is that I am a journalist first and an entertainment reporter second. Second, I would tell them that, because of the technology era that we are living in, you can create your own show. I see so many bloggers on the red carpet – something that did not exist when I first got into entertainment news.

When you got the development deal with NBC, where were your expectations?

I have wanted to be a producer for so long! The lessons that I have learned since embarking on this journey is that oftentimes, it takes longer than you think it will to get a project off the ground. Now, I am learning to have a little more patience. The great news is that I am now free to produce projects for any network and I’m so grateful enough for that!

You wrote the book, Exactly as I Am while still at Access and then after you left the show, you started your own foundation. Tell me about those two projects.

I wrote my book Exactly As I Am, because so many young ladies were reaching out to me asking about the stars they see on TV. They wanted to know if they looked as beautiful as on the magazine covers and on TV. I wanted to use my “access” to talk to celebrities about where true self-esteem comes from — not from fame, money, or appearance but, as Oprah Winfrey said in my book, “You are valuable because you were born.”

I created my foundation, the S.H.A.U.N. Foundation for Girls shortly after I left Access Hollywood. We are a grant-making foundation that supports small grass-roots, nonprofits that are empowering girls in five key areas: (S)Tem, (H)Ealth, (A)Rts, (U)Nity And (N)Eighborhoods.

You came from a two-parent household in a middle-class home, went to the same high school as Diana Ross and Jack White, hung out at Aretha Franklin’s house, why is the empowerment of women so important to you?

I grew up with strong female role models in my home who encouraged me to work hard and follow my dreams. Many young girls did not have those same type of role models and many come from underserved communities. My goal is to help level the playing field so these young ladies can thrive.

Recently, we’ve had the whole #MeToo movement, how do you work to educate young women that they do not have to take that in the workplace or elsewhere?

The woke climate for women has certainly changed for the better with the Me Too movement. I am very pleased that young women won’t have to endure the type of sexual harassment that so many of us have endured. I use to work with a guy who would write little crib notes to his co-anchor about what sexual things he wanted to do to her. He was able to get away with it because he was the main anchor on the show. He was pretty disgusting.

Shall we go there? Did you have any thoughts when the whole thing happened with your ex-colleague Billy Bush and the Trump situation?

I worked with Billy for many years and it was a very tough lesson he went through. When I saw him talking about how the whole experience affected his three girls, I knew he was really sorry about his part in the situation. 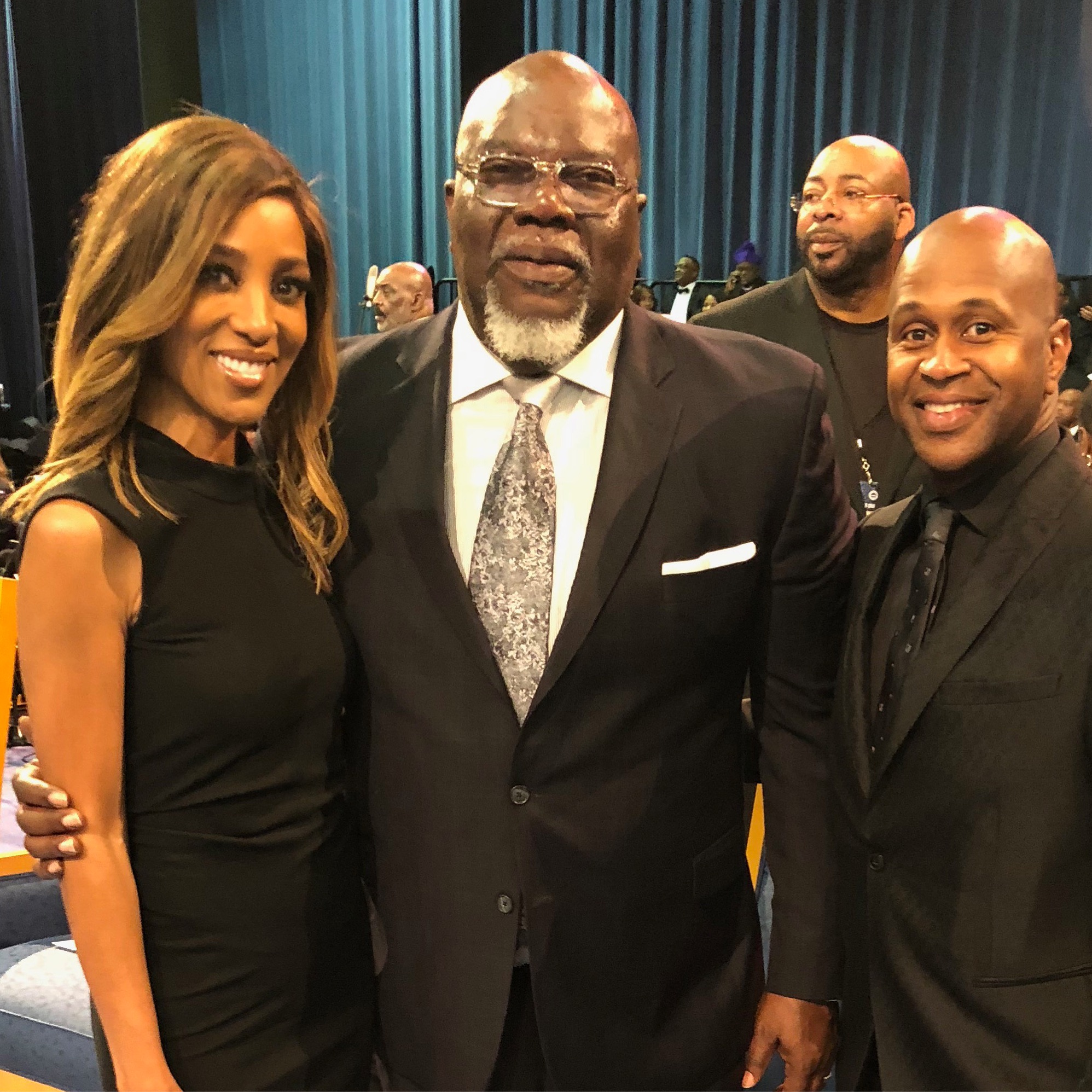 I’m excited about the Victoria Christopher Murray books that you are producing for Lifetime along with Pastor T.D. Jakes. Please tell BGN about that.

I am sooooooo excited about this project! I optioned the rights to [Victoria’s] 7 Deadly Sins series right after I left Access Hollywood. I had been looking for a producing partner and a network for a while and in talks TD Jakes and Lifetime. God is good! We are writing the scripts now for Lust, Envy, and Greed. I can’t wait to bring these movies to the audience!

You’ve obviously worked very hard in all areas of your professional life, what does Shaun do for fun?

First of all, I have to exercise regularly to reduce any and all stress. I love traveling to other countries to expand my world beyond LA. My family and I just got back from Spain. We’ve also been to Israel, Greece, Costa Rica, Germany, Switzerland, France, Italy and other places I can’t even remember!

Looking back at your life, what would you tell the younger Shaun?

Just to have more patience. Life is unfolding the way it should!