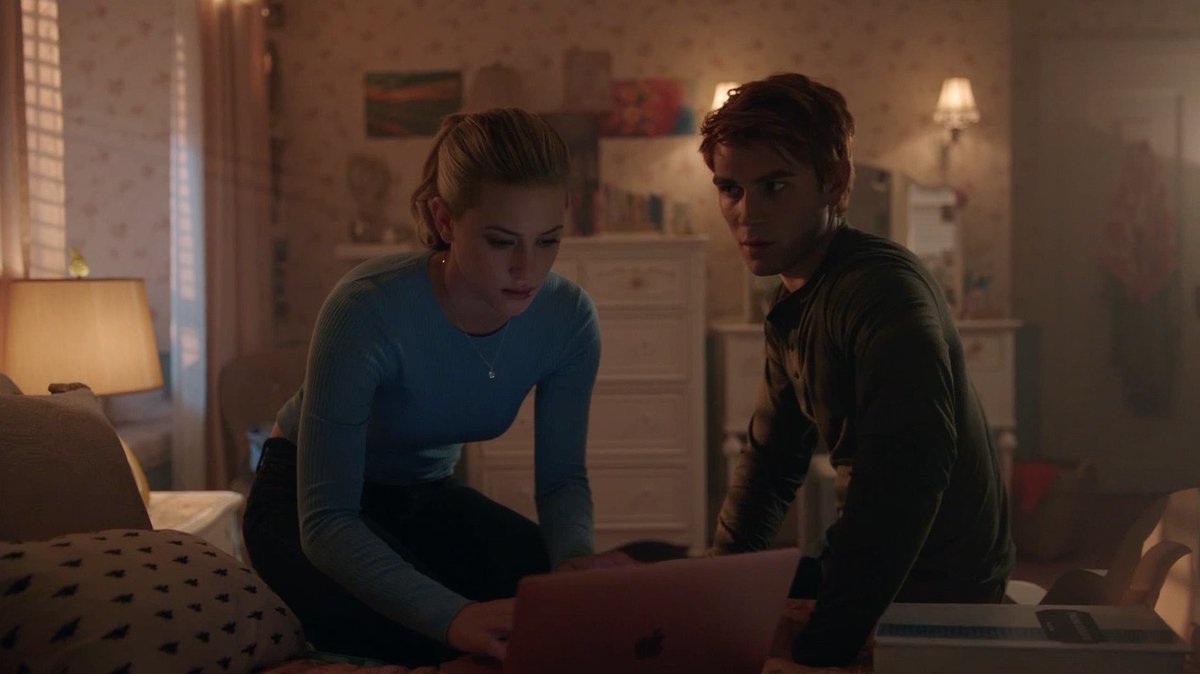 I hate to say I’m surprised by Riverdale cranking out a good hour of television, but I am. I’m surprised. Since the premiere, the show’s been flailing, capping us off with that Red Circle business (which is so easily forgotten this week I’m even more offended we had to sit through it), but “When A Stranger Calls” is a delightful hour. Not because it’s fun to watch. It’s actually very dour. It’s low on laughs or anything resembling fun (even if Alice walking into a party looking like a Pussycat Doll is highly hilarious). While Betty works with The Black Hood, Veronica begins the episode in Hospitality Mode only to have switched to Scorched Earth by the end, beating up would-be rapists and all.

The Black Hood continues to torment Betty, now with phone calls where he threatens to kill Polly unless she continue talking to him. And then threatens to kill her friends unless Betty doesn’t cut them off. So yes, Betty is in dire straits this week and spends most of the hour in or near tears, deviating only to hit Alice and Veronica with blistering condemnations borne of the Black Hood’s demands.

This story only works if we can see small kernels of overlap in the Black Hood and Betty, and they’re definitely all there. Betty’s visitations to the dark side are some of the best moments Riverdale’s come up with (and they work much better than what they tried to do with Archie), and they’ve laid the groundwork for Betty’s reluctant partnership with the Black Hood now. Even if Betty wearing a black hood and looking at herself in the mirror is a bit too on the nose, I’ll forgive it.

Betty may not want to kill anyone, but she is fed up. She’s fed up with Alice’s hypocrisy and publishes a mugshot the Black Hood gives her, taken when then-Serpent Alice was a teenager. And Betty is annoyed to see Veronica sliding a bit too easily back into vapid party girl territory. And she is questioning what her and Jughead’s relationship can be as he gets closer to the Serpents. Despite Betty balking at humiliating her mom, crying after calling Veronica a bad person, and being determined to “walk back” her breakup with Jughead, it doesn’t take Betty long to come up a new victim for the Black Hood: Nick St. Clair, Veronica’s old friend and Cheryl’s would-be rapist.

We’ve heard only a little about Veronica’s pre-Riverdale life, and of course, none of it was good, so it was only a matter of time before (1) Nick proved himself to be the worst or (2) Veronica picked up her old habits. I, for one, am pleased Veronica maintained her rock-solid status even while trying to please Nick enough to close the deal on her dad’s new project. Instead, we (and Veronica) see Nick’s true colors when he tries to force himself on Veronica, who pushes him away and slaps him when he tries to compel her to sleep with him by threatening her dad’s project.

As a shiny, new, and reasonably cute (though let’s be clear, not at all cute enough for any of the girls on this show) guy in town, Nick’s in the perfect position to attract Cheryl’s attention. And he’s also just lecherous enough to slip something into Cheryl’s drink, steer her back to his hotel room, and try to rape her. He’s interrupted by Veronica and the Pussycats who punch him in the face, kick him while he’s down, and just mess him all up. Even if this episode had been absolutely horrible before this, watching Veronica and the Pussycats kick the crap out of Nick would have made it an automatic win.

The triumph at watching Nick getting knocked around being followed by Betty giving his name to the Black Hood are intrinsically linked. We agree Nick deserved that beating and we’re probably on Betty’s side when she gives his name, too. This is a guy we can be reasonably certain has raped girls before and would definitely do so again, so maybe Betty chose well. Especially if the alternative was her sister.

But who will Betty choose next time? The Black Hood forced her hand now, but will he have to do so in the future? And what if the next person Betty chooses isn’t guilty after all? We’ve seen these kids make poor decisions before, and assign guilt to the innocent, so are they really the best arbiters of justice? Of course not.

In any case, I’m hype. I knew you could do it, Riverdale. Please don’t mess it up.