“Bow Knows” best on black-ish and Dre tries to have “The Talk” with his coworkers.

As social beings humans have always felt the need to communicate with each other, to facilitate that, we evolved from ‘primitive’ methods such as carving on stone, to the latest in technological advancements. But as we move forward we’ve appeared to have lost the ability to communicate with the people closest to us — especially those who live in the same house — as Bow herself learned when the only way the family seemed to pay he attention was by sending them a “dinner’s ready” text. 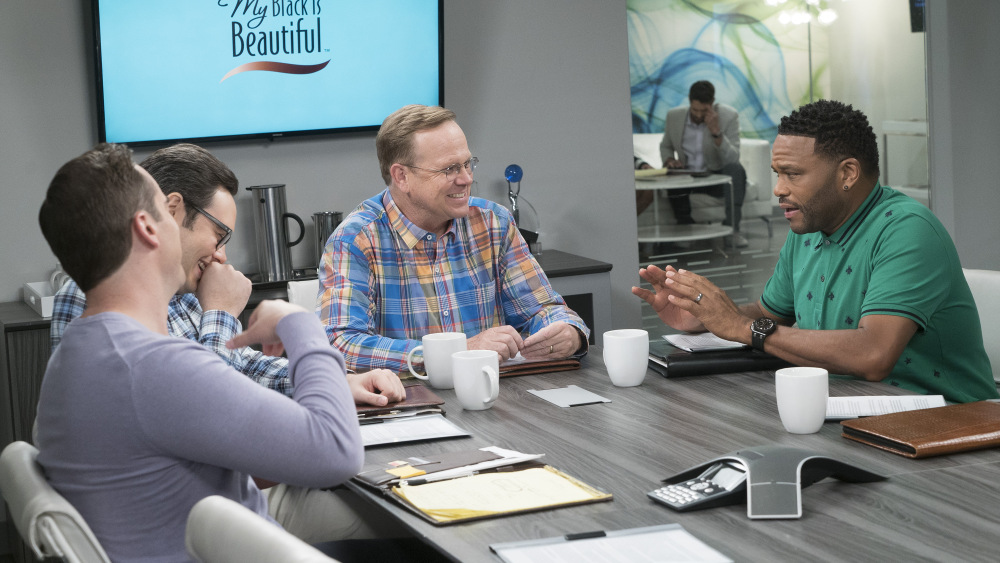 Dre arrives at a meeting and is told that the team has a new “My Black is Beautiful” ad campaign, that is to be centered around “The Talk,” and of course Dre is taking the lead because well, yuh know, he’s the only other Black person there since Charlie is away, and Daphne — the Lido in Stevens & Lido — is hardly ever there. When Connie asks him if “The Talk” is really that necessary, Dre explains that it happens in every Black household in America and is done to prepare Black children for the challenges they’ll face in an unfair world. For his talks with Ruby, Dre learned “America hates you.”

Bow, who seems to be more settled from previous episodes, is preparing homemade baby food, when Dre asks why she’s doing that instead of using store bought, Bow tells him that she’s discovered the world of online mommy support groups, and was taking their advice regarding Devante’s nutrition, but of course Dre wasn’t listening (that whole bit stopped being funny a season ago). Ignoring the offended look on Bow’s face Dre tells her that his coworkers aren’t interested in the campaign because the topic doesn’t directly affect them, and isn’t it funny that he does the same thing to Bow?

Ruby finds Bow chatting with her online group and calls it stupid after Bow explains how they communicate using acronyms. She proclaims that peanut allergies are a conspiracy to bring down the legacy of George Washington Carver, the inventor of peanut butter. Acting on the advice of the other moms, Bow takes the kids’ electronic devices away and commands them to work on a puzzle together, which, it turns out, they actually enjoyed doing. I remember when my mom did this, she called the TV the “idiot box” and told my sister and I to either go outside and play or stop wasting her money and read the encyclopedias she bought; ahh the good ole 90s.

In order for people, i.e. white people to understand his “struggles,” Dre decides that he needs to understand theirs (head scratch gif), so he goes around the office initiating conversations with his workmates about certain things they might have in common, and shows them that they themselves actually had a version of “The Talk” with their own parents. Lucy’s mom warned her not to jog with headphones on or wear her hair in a ponytail. Similarly, Dre said he can’t jog at night while wearing a hoodie. Josh’s father spoke to him about fitting in at schools and being picked on because he was always the “chubby new kid,” and Dre compared that to other kids judging him for his appearance.

Dre saw these one-minute conversations as wins, even though people’s reactions were basically an equivalent of, “Oh yeah, I get it, now pass me the salt.” As Dre attempts to connect with his workmates, Bow finds Ruby cackling up a storm. When she asks what has Ruby so entertained, she gleefully reveals that the ladies in Bow’s mommy group hate her now because of a comment Bow made (deepest of sighs). Y’all, for a short while Bow had friends, she had other women she could talk to about her experience as a stay-at-home mom, for the briefest of moments there were adults who valued her, but alas since this is black-ish it wasn’t meant to be.

Bow discovers that her advocating for childhood vaccines has caused the other moms to turn against her, and in her need to prove herself right she reminded them she was a doctor, and therefore knows what she’s talking about. It bothers me that Ruby found the fact that Bow was getting death threats and people turning against her, hilarious, but then again….

After having extremely tense virtual text exchanges that involved shouting, insults and keyboard pounding Bow decides that maybe being in an online chat group wasn’t what was best for her, and decides she’s going to write a book about motherhood and her experience as a doctor. I’m conflicted. On one hand, I’m glad Bow is going to be doing something for herself, but to me, this is just another way for Bow to become isolated from having interactions with people outside of the home and family.

In all honesty, this episode didn’t really get into “The Talk.” If anything it kind of glossed over it, which is strange because black-ish has never shied away from being blunt when talking about race. In the very first episode of the season “Juneteenth,” the show addressed slavery, and even commented on the hypocrisy of Columbus Day.

Based on promotions for the episode, I was expecting to see Dre and Bow sit down with the children and actually talk to them about what it means to be Black in America. I was expecting to see Dre pull Junior aside and share with him the realities of how he would be perceived by white people because he’s a young Black boy growing into a young Black man. Instead, we saw Dre commiserating with his white co-workers in short conversations without them, in my opinion, express genuine understanding of what “The Talk” is really about.