The Brobot Johnson Experience is an immersive theatrical performance about a half-brotha, half-robot trying to save two worlds through the power of storytelling.

Not a lot of theater is aimed specifically at Black folks, though it, of course, exists. And even less is aimed at the Black nerd. But The Brobot Johnson Experience creator Darian Dauchan has created a one-man show that speaks to the multitudes of the Black Nerd, infusing comedy, hip-hop, science fiction, and a love of community in an 80-minute performance.

Without spoiling too much of the show, the Brobot Johnson Experience stars Flobot Owens of a Tribe Called Space Quest from the Planet Nubian in 2118 as he arrives on planet Earth in 2018. His mission? To save humanity. He’s here to spread “peace, love, and dopeness” using 13 Adinkra symbols to explain the history of the Brobots (and Sisbots) and philosophize about how we can all treat each other better, all with the purpose of saving us from ourselves. Ben Brantley of the New York Times called him an “Afrofuturist Mr. Rogers,” but Mr. Rogers never rode in a spaceship named after LL Cool J.

The Brobot Johnson Experience is exactly what it says on the tin, an experience. The hilarious one man show, playing at the Bushwick Starr Theater in Brooklyn, delights, entertains, teaches, and gets you moving with an engaging performance made for Black nerds. Dauchan quickly pulls you into his sci-fi rhymes and hip-hop reference laced story.

Believe me, you’ll be on your feet by the end of the night. 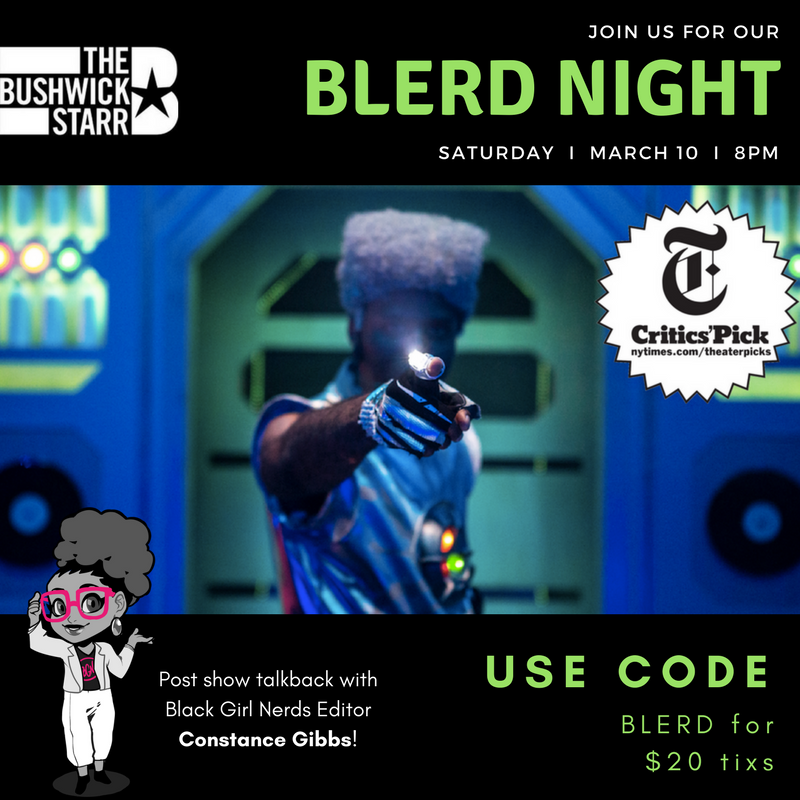 BGN readers and NYC-based blerds can come see the show for a discounted price of $20 using the code BLERD for a special Blerd Night on Saturday, March 10. After that night’s performance, there will be a talkback by yours truly, Constance Gibbs, where I’ll talk with Darian about the creation of the show, his blerdy roots, and where he hopes the show can go next.

If you want to come through, visit thebushwickstarr.org for tickets and location.

A note about accessibility: the theater can accommodate those who cannot use stairs, but they need to know in advance, so please email the Box Office at boxoffice@thebushwickstarr.org at least a day in advance.