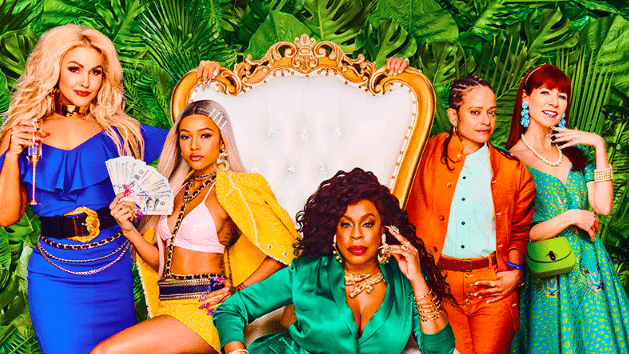 Welcome back to Palmghetto, I mean Palmetto, Florida, home of Desna Sims (Niecy Nash) and her nail salon crew in the third season of TBS’s woman power dramedy Claws.

Picking up just moments after season two left off, Desna is in the hospital with her sister-in-law Virginia (Karrueche Tran) after unknown assassins tried to murder Desna in broad daylight. You see, Desna is more than just the most talented nail artist on the eastern seaboard. She’s also got those glorious acrylic tips dipping into a whole hell of a lot of illicit activity, from the Russian and Haitian mobs to the Dixie Mafia, as she and her girls try to get paid. At the end of season two, Desna and her brother Dean (Harold Perrineau) have taken care of the Russians and Haitians, but now that Desna has inherited the casino Bayside Rapture new threats emerge to her and her fam’s safety. 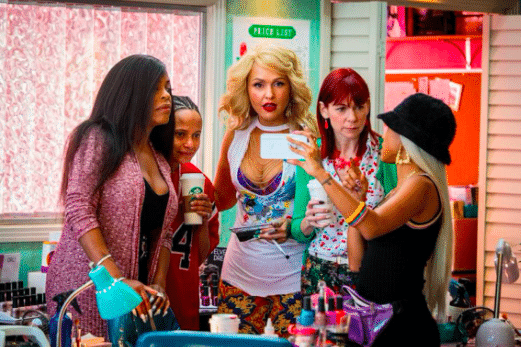 The villains in season three are once again many-fold. Not only are the deceitful remaining members of the Dixie Mafia, including Uncle Daddy (Dean Norris) and his boyfriend Toby (Evan Daigle), and Uncle Daddy’s son Clint (Michael Drayer) still harboring feelings of anger and revenge toward Desna, she has a whole new gangster family to contend with: casino co-owners Mac (Michael Horse) and Melba (Rebecca Creskoff) Lovestone. It seems that Desna was unaware that the casino she inherited from her dead husband Gregory Ruval (Jimmy Jean-Louis) was a small minority share since only Natives can have majority ownership in a casino. And Mac and Melba fully intend to recover all shares of the casino for their further enrichment. Worse, Desna finds out that the Lovestones are not only laundering money, but their settlement offer is pennies on what the casino is worth even when Melba Lovestone offers Valentino bags to all the women to sweeten the pie to get sole ownership of Bayside Rapture back quickly.

In the meantime, after her psychotic break, Polly (Carrie Preston) is pretending that the mental health facility she checked herself into is a hotel. Jenn (Jenn Lyon) and Bryce (Kevin Rankin) are pretending to love Tampa after fleeing Palmetto sometime before Desna and Virginia are attacked. Quiet Ann (Judy Reyes) is pretending she’s okay after her huge fallout with her detective ex-girlfriend Arlene (Suleka Matthew). Roller (Jack Kesy) is pretending he doesn’t have huge-ass feelings for his gorgeous ex Desna.

The only one not pretending is Desna’s brother Dean, who has his sights set on avenging whoever shot his woman. “I’ll take a knee and a gun for my beliefs,” he tells Desna after she finds his gun. And Virginia’s cornea transplant from an “elderly white woman Reiki healer” has little miss Blasian with a whole new personality to add to her old one courtesy of her eye donor. Whew. That is one boatload of drama right there. 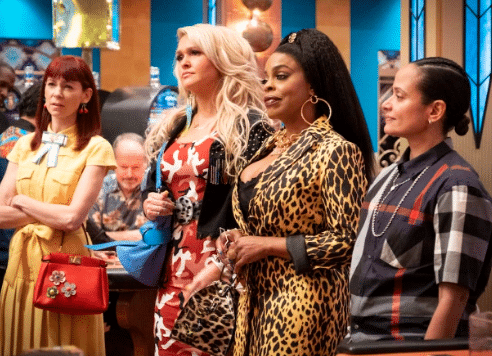 We’re only two episodes into Claws season three, and their unique brand of messy intersectional feminism is right back on point. Once again Desna and her crew are up against the forces of patriarchy evident in the Dixie Mafia leadership. And once more, they are up against a patriarchal woman in Melba Lovestone, who brings a colonization narrative into the mix. Melba is a white woman married to a Native man. She benefits and openly capitalizes off his Indigenousness and the loopholes that bring for a casino in Florida. While it is indeed problematic that Claws would once again pit people of color against each other, within the context of Florida, corrupt casino owners are a well-known fact of life here. It’s unfortunate that the first Native character in Claws would be a villain, and simultaneously it’s also a sad reflection of Indigenous issues in the sunshine state. This is the quantum physics of social justice commentary in pop culture: it’s wrong and right at the same time.

And while the remaining members of the Dixie Mafia may be queer, their anti-Blackness is way showing out in this third season in a manner it’s never done before. “[Desna] made you feel like a minority in your own country!” Toby says to his lover Uncle Daddy. This sense of white privilege and white entitlement never fails to shock, especially when the privileged ones are members of a marginalized community themselves. Whiteness trumps all other oppressed identities, and Uncle Daddy’s ever-growing resentment of Desna, her success, and her majority WOC crew speak to a general truth for many white folks in Trump’s America. The fact that Uncle Daddy also owns a pill mill while scamming Medicaid and mostly getting away with it also speaks to his white devilry and privilege. 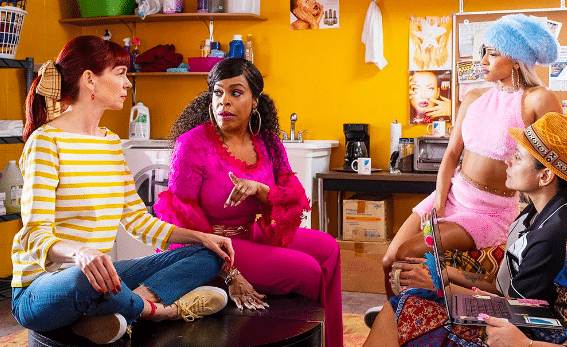 As its plots thicken, Claws’ third season continues to be the campy and complicated girl-power romp that stole my heart from its pilot episode, replete with a musical number dance scene paying a turnt homage to Marilyn Monroe’s iconic “Diamonds Are A Girl’s Best Friend” number from Gentlemen Prefer Blondes as well as many more obvious tributes to Queen Bey.

This third time around Claws and its badass women the outfits are blingier, the nails sharper and longer, and the attitudes even bolder as Desna and her girls fight for a bigger share of Palmetto’s dirty money pie. The narrative twists are hitting hard, and thanks to the excellent writing so are the laughs to offset the growing intensity. Yes, Claws is as violent as ever. But more importantly, the sisterhood of Desna continues to remain a strong and vital part of so many kinds of representation and inclusion in the American visual media landscape.

New Episodes Of Claws Every Sunday At 9/8c On TNT.