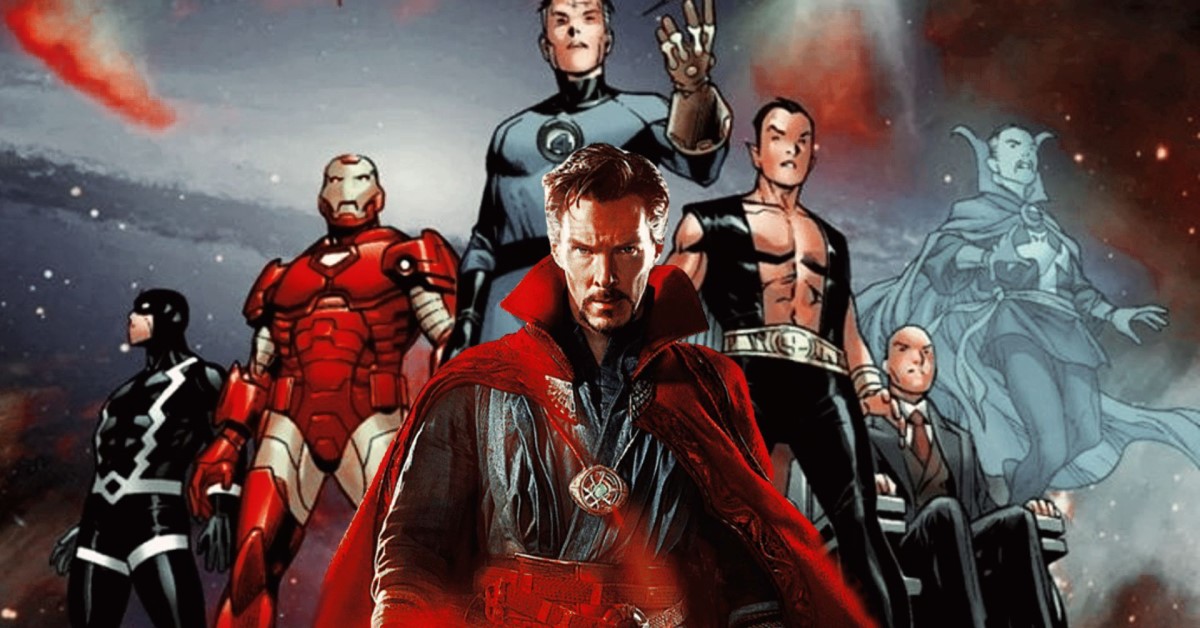 The recently released Doctor Strange and the Multiverse of Madness trailers brought us plenty of Easter eggs to pick through. While not all of them were massive, some details were as subtle as a Union Jack shield wielded by Captain Carter from What If…? While these slight clues all point to Doctor Strange and the Multiverse of Madness being one of the biggest crossovers in the MCU, all of them pale in comparison to the appearance of the Illuminati in the MCU. Why? Well, some of their decisions brought about the destruction of entire worlds.

Though the Illuminati were chronologically introduced in 2005’s New Avengers #7, canonically, they existed for quite some time. Drawing a parallel to the MCU, this secret organization formed sometime during T’Challa’s rule over Wakanda. Tony Stark of Earth-616 was still among the living, and Namor the Sub-Mariner still counted among the good guys. The secret organization comprised of: the Sorcerer Supreme Doctor Strange; Black Bolt, monarch of the Inhumans; Professor Charles Xavier, founder of the X-Men; Reed Richards of the Fantastic Four; Namor, King of the Atlantis; and Tony Stark as Iron Man, and founder of the Avengers.

Tony Stark initially wanted to form a massive group of superheroes in the aftermath of the Skrull-Kree war, which found its way to Earth. However, the political ramifications of such unification and attempted hierarchical structuring would ultimately fail due to their differences. So, the assembled superheroes, along with King T’Challa, who attended the first meeting, agreed to keep the respective groups of superheroes operating individually while the Illuminati continued to meet and discuss further shaping of the world in secrecy. Unfortunately, T’Challa was the only one who refused to be a part of the Illuminati and left the meeting.

But things aren’t as plain in the MCU as are in the comics. At approximately 01:11 minute mark in the new Doctor Strange and the Multiverse of Madness trailer, we see our Doctor Strange brought before a shadowy tribunal by several advanced or perhaps variant version Ultron bots. This “cabal” is presumably the Illuminati, and their appearance is confirmed by the luxurious voice of what sounds like Patrick Stewart, Professor Charles Xavier. This could very well be the X-Men’s introduction into the MCU for which fans have waited.

The rest of the Illuminati are still in the shadows, but we can speculate what the identities of some of the other members are. One of them, judging by the appearance of Ultron bots, might be an alternate, good-guy version of Ultron from one of the parallel universes, though they shouldn’t exclude an appearance from What If..?’s Killmonger. It might also suggest the appearance of Superior Iron Man, allegedly portrayed by Tom Cruise. Note that Superior Iron Man isn’t the self-sacrificial version of Tony we’ve come to know in the mainline MCU. His moral compass is non-existent, and he practically keeps the entire population of Earth hostage via the Extremis virus in his respective universe.

Considering that Earth-616 Tony isn’t living, this is a viable option. However, there’s potentially a wild card member who we perhaps will be officially introduced to in Wakanda Forever in the form of Riri Williams also known as Ironheart, a genius inventor akin to Tony Stark, who reverse-engineered Iron Man’s armor and made her own superhero suit. While the character is not set to debut until the Black Panther sequel, we might be looking at a cameo appearance of a variant in Doctor Strange and the Multiverse of Madness.

The remaining members are currently one of the most hotly debated topics surrounding the upcoming films, and suggestions are running rampant. Captain Carter from the What If…? is quite possibly one of the members, judging by the Union Jack shield on one of the film’s posters. A good version of Karl Mordo, which might be the one we’ve seen in the trailer, is most certainly an option as well. Captain Marvel is also a potential member, though we still don’t know who will helm the role. There are strong indications of Lashana Lynch adorning the cosmic superhero’s suit.

Admittedly, most of the members of the Illuminati are positioned differently on the good-evil scale, but the purpose of their group is simply to protect the universe at all costs. Unfortunately, according to comic book history, the group’s machiavellian methods have brought about the destruction of different worlds.

Not only did they keep secrets from their respective groups of super teams and the superhero community at large, but they also kept secrets from each other, which is something T’Challa warned them about before he left their initial meeting. They also created weapons of world destructions and even had Doctor Strange dabble into the darkest of magics to learn world-killing spells.

Perhaps what rings the most closely to what we’ve seen before in the MCU is Captain America: Civil War is a chain of events adapted from the original comics that jump-started by the Illuminati’s internal differences. The group also banished Hulk to space, setting into motion a series of events that culminated with World War Hulk. They abused the Infinity stones countless times, and they destroyed several iterations of Earth that threatened the existence of Earth-616. Taking all of this into consideration, it’s entirely possible that they may end up being the largest threat in the upcoming Doctor Strange and the Multiverse of Madness.

Considering that Doctor Strange is brought in front of a council he presumably knows nothing about, strongly indicates that the shadowy group depicted in the trailer is composed of members that are clearly outside our known MCU universe. All of this information should be taken with a grain of salt, however, considering that the MCU and none of the actors involved have offered any commentary on the appearance of the Illuminati in the upcoming film. However, it’s evident that the secret organization isn’t quite as clandestine as they used to be, and they may end up being the largest threat in the entire film.

Unfortunately, we’ll probably have to wait for Doctor Strange and the Multiverse of Madness to release on May 6 this year, to find out more.