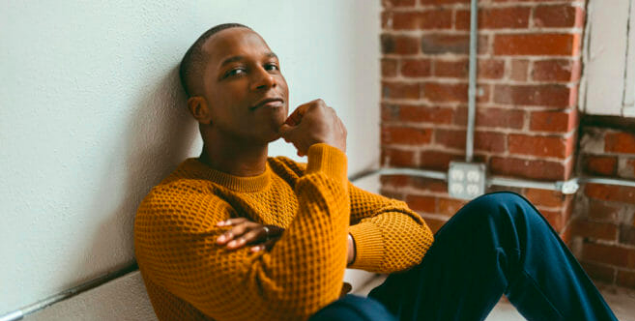 Nearly a year ago the film Only starring actor Leslie Odom Jr. premiered at the 2019 Tribeca Film Festival.

And during that year, it was certainly a different time, as we fervently wash our hands more now than we ever have before and stock up on hand sanitizer in wake of the coronavirus — a virus which has led to illness and death all over the world.

Prophetically creepy where art imitates life imitating art, Only tells the story of a mysterious airborne pathogen virus, but in this case, the circumstances are far more severe. This virus is causing the premature deaths of women in a post-apocalyptic period. Eva (Freida Pinto) is one of the few female survivors left, and her lover Will, Odom’s character, does everything in his power to keep her under his wing and protect her.

In an exclusive interview with the actor, known best for his roles in the Broadway production of Hamilton and the film Harriet, BGN spoke with him about what kind of story Only is, working with Freida Pinto and some kernels of info about his latest project, One Night in Miami — Regina King’s directorial debut in which he plays the role of the legendary Sam Cooke.

Only premiered last year at the Tribeca Film Festival and is now scheduled to release in theaters this month. Has the tone around the film’s release changed in the wake of the coronavirus?

It certainly changed. I talked to people individually about it. It’s certainly been made more relevant given in our current situation. It’s very topical right now.

This isn’t your average post-apocalyptic film about a viral outbreak. This essentially is a love story. Would you agree with that? And how would you define Only?

I would agree with that. I think that it’s a big story but also small with these two people in a relationship. It asks questions about a woman’s choice and autonomy over her body but talks about what your responsibility is to your partner. What is your responsibility in a relationship to the person when you say no? Will is asking that question, and Eva is asking that question, too.

You had some really great chemistry with Freida Pinto. Did you spend a lot of time getting to know each other while prepping for the role?

We had a fair amount of rehearsal. We were in Atlanta together without our significant others, and so we had dinners and long talks. Talking about Will and Eva’s love story and having been in this long-distance thing for years and finally being together and Will being weeks maybe a month away from proposing, that kind of thing you know, the more we invested in the healthy really positive relationship between Will and Eva, the more pressure they’d be under when disaster struck.

There’s a montage in the film where it looks like both Will and Eva are basically suffering from cabin fever. They both get really frustrated being around each other, and the scenes look quite organic. Did Takashi allow you as actors to have a moment where it was unscripted and give you a chance to kind of improv those scenes together? Or was that all on the page?

Great question. He had ideas of little scenarios he wanted to see. He wanted to see how we interacted in this kind of situation so that he could include it in ways that he wasn’t sure about later. And so yeah, we had lots of those scenes, They were really wonderful and informative for us because we could build on those once we got back to the script proper.

You have this ability to selflessly play the role of protecting a woman so effortlessly. Is that something that just comes naturally for you?

I tried to bring Will as close to me as possible and obviously also reach for him in places where he didn’t feel close, that was a little outside my comfort zone. All I try to do is have compassion for people I’m playing. There’s a villain or hero somewhere in the middle, and so I understood him. I understood what he was trying to do and also understand what happens is tricky when you cross the line from taking someone to deciding that you want to spend your life with them.

You are playing Sam Cooke in Regina King’s directorial debut One Night In Miami. Can you share with us about your preparation for that role and what that experience was like?

Oh, thank you. Great question. Well, I was lucky you know. He’s gone too soon. Died at 33. But there are volumes of music to listen to, and you really can learn so much about the heart of somebody when you listen and dissect the way they pour themselves into a song. So I prepped by listening to hours and hours of his music. And there are quite a bit of books that have been written about his life. I read everything I could get my hands on and listened to everything that was out there. He’s a major star, one of the biggest stars in the country, and certainly one of, if not the biggest, Black star in his time.

What we are really doing in this movie is looking at Sam, Malcolm, Jim, and Cassius. It’s a way that they never would have shown themselves to you. This is them hanging out in a hotel after a couple of drinks, not having known each other for some time. So the men that we meet at this hotel — it is not the same Sam that you see talking on Dick Clark, you know. So, that was a lot of fun.

What was your experience like working with Regina King in her directorial debut?

There’s not a better ally you can have as an artist. She’s just a great coach. I thought she did a brilliant job of making it safe and welcoming, a loving space but also a space where you can probe and ask questions, challenge the material a bit in the places where it needed to be questioned. It was like going to the gym, just kickin’ it around a bit, and the other guys in the movie are just awesome.

Only premiered in theaters and on-demand March 6th.

Review: ‘Mr. Malcolm’s List’ Brings Back the Simple Charms of Romance in the 18th Century

New Trailer for the Period Drama Based on Suzanne Allain’s Novel of the Same Name ‘Mr. Malcolm’s List’