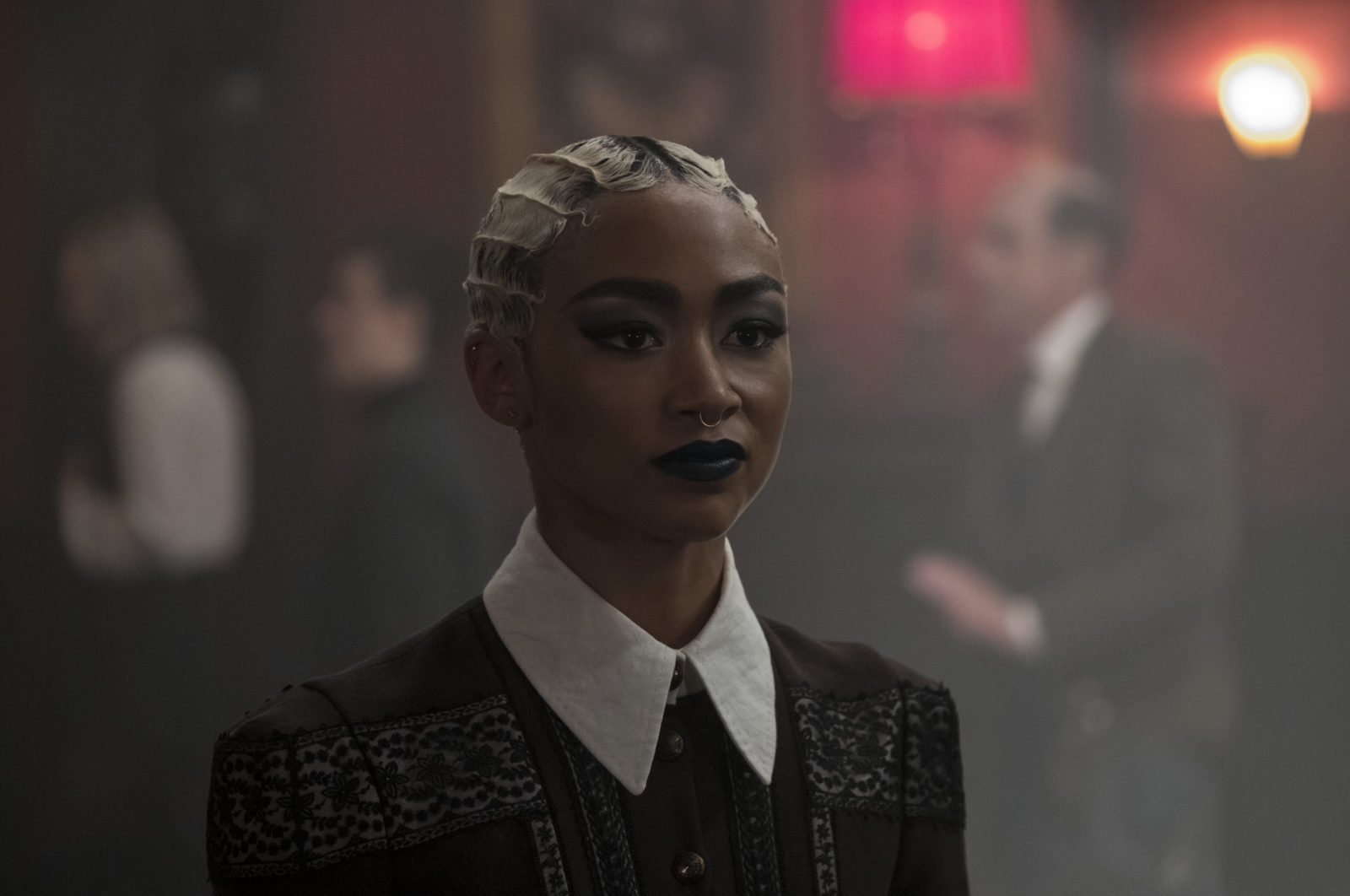 BGN got an opportunity to chat with actress Tati Gabrielle, best known for her role as Gaia on CW’s The 100. Tati spoke to us while on set, with her adorable, super chill chihuahua, Nas (like the rapper as she pointed out) in hand.  We chatted briefly about her new character, Prudence on the upcoming Netflix show, The Chilling Adventures of Sabrina.

The show centers around Sabrina and her pals navigating high school in Greendale, but the show also center around the world of witchcraft and Sabrina’s attempt to balance her mortal life with her magical one. That’s where Prudence and her dark talents come into play. Prudence is the smart, take charge leader of the powerful trio of witches called the Weird Sisters. The Weird Sisters are young ladies from the Academy of Unseen Arts, who hate everything about mortals. Prudence exudes hatred of Sabrina and devotion to Satan all while being the badass chick in charge. Tati portrays her character very well because she knows who she is and what she stands for. Tati was more than willing to share her ideas on Prudence and why she is such an amazing character. There is no question that Prudence will become the character you love, but hate at the same time.

What characteristics did you take from your character Gaia on The 100 to the character of Prudence on The Chilling Adventures of Sabrina?

So, definitely that devout thing. The belief system. Believing in something and being so devout that you see nothing else. They both have this strength as women. So, that aspect carried over as well. Their strength and this groundedness.

In your own words, who is Prudence?

Unlike the other two witches in the trio, the other two aren’t instantly as devout to the faith as Prudence is. On top of that, you see that she’s very cunning with how she moves. She’s very thoughtful about everything she does. She doesn’t necessarily do anything just for the sake of being evil. She’s very calculated. You do see — to a certain extent — Prudence has a little bit of compassion when it comes to being an orphan similarly to Sabrina. Prudence has more layers and more depth than just being evil and just being a witch. That all comes from a place.

I think it’s awesome. It’s been something incredible to be able to portray both minorities as myself. It is an honor honestly to be able to step into that position and rep it and rep it strong.

How does this appeal to your Generation Z and what makes the women on this show strong female role models?

So, I think it can appeal to my generation in terms of, one, figuring out who you are and going to the limits. You see, Sabrina has to go and find that for herself. And, two, teaching my generation to believe in something and to stand strong by your beliefs. As far as the women in my generation, to show that we have power that may not be magical power — but that we have a stance and we can take a stand. Despite what the pressures and what the world puts on us, we can, at any point, step out of that and defy the laws of social interaction or defy the place that we’re supposed to fit into.

Prudence is a bully. What part do her fears play in her attitude towards Sabrina?

It’s interesting because I don’t think Prudence’s bullying of Sabrina is a typical case of being afraid of anything that Sabrina is, but rather, it comes from a place of “mortals have tormented us our entire lives,” and the fact that Sabrina doesn’t get that and doesn’t see it and can blatantly disrespect our traditions and our beliefs in that way. I think it comes more so from a deep place of rage. Or more in terms of fear because Sabrina’s father really changed the coven and changed our traditions. It could just be the fear of her trying to keep things the same and not wanting that to happen again.

What parallels do you see between yourself and your character?

I definitely see what I’ve learned from being Prudence is I’ve grown my own strength as a woman and standing up for myself and not taking anything that doesn’t align with what I want to be and who I am. On top of that, Prudence is very fashionable, and I do like fashion. I think with both of us, belief definitely is a big thing we are already aligned with. Believing in something deeper. She’s taught me how to act on that unapologetically.

The Chilling Adventures of Sabrina hits Netflix October 26. Check out the trailer below.