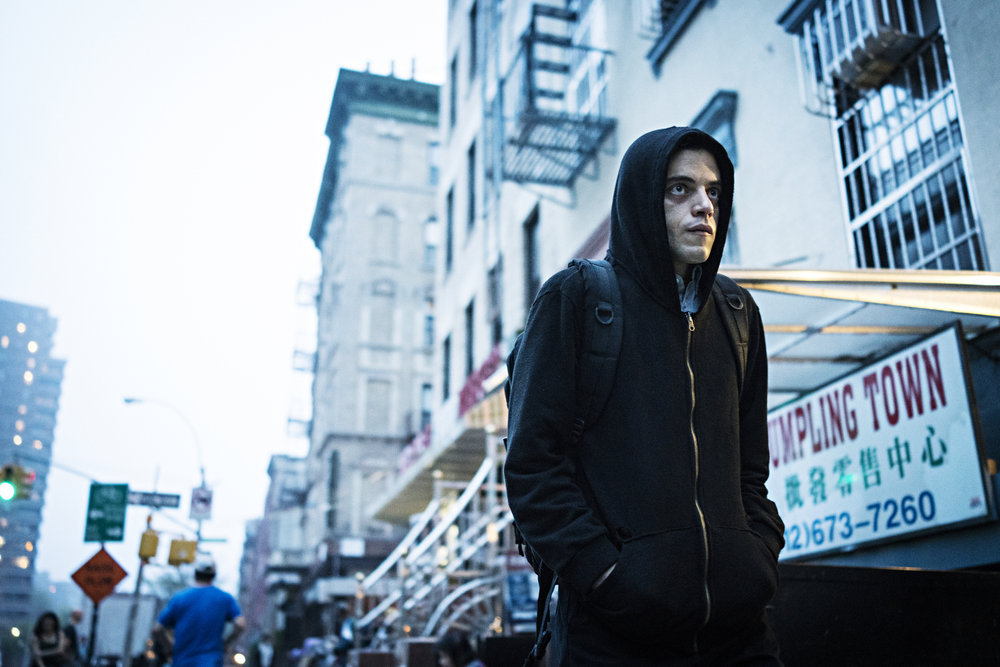 It’s another week of the wild ride of Elliot Alderson’s descent into the underworld of Evil Corp and uncovering more secrets from the Dark Army.  We learned last week, that Elliot’s father Edward (Mr. Robot) worked for the Dark Army, that Bobby Cannavale plays an unnamed character who is possibly a “cleaner” for the Dark Army, and that Angela now sees Mr. Robot and is working for him.  What does this all mean exactly?

Who the hell the knows?

Our episode opens with Elliot starting his first day of work as a security analyst back over at E Corp.  Remember last week when he begged Angela to hire him back?  Well, it looks like his request was fulfilled and we see Elliot with his trusty steed — his favorite black hoodie — enveloped over his head like a security blanket ready to take on this evil corporation.

Elliot begins with exposing William, his technology manager, who was selling private consumer data from E Corp’s clients.  He tips the FBI and immediately gets him arrested and now moves up further on the food chain of corporate to take on his next victim. Now while this is all happening, Elliot is back to taking Zoloft again which is reminiscent of how he conducted his hacks in season 1.  The next executive, Peter (his national manager), cheated on a number of emissions that their auto manufacturers make, resulting in more pollution released than what they actually report. Peter got tipped off to the FBI as well from Elliot and was arrested accordingly. Elliot is also using a stop gap by compromising their e-shipping management tool. He’s sending shipping requests to facilities, but he’s making it look like all of the paperwork is going to New York.

Elliot further becomes our hero during this hack by getting rid of middle management douchebags responsible for sexual harassment, Ponzi schemes, and subprime mortgage scams.  His logic is when Evil Corp is purged of all of their terrible executives, it will no longer be evil when it gets back on its feet.  So this is Elliot’s way of fixing what he damaged.

When Elliot goes home, the dark cloud of depression and loneliness hovers over him and he forgot what his life was like before.  He doesn’t get it. Even though he knows he is doing the right thing, he feels a void inside.

Gloria Reuben comes back, fulfilling her role as Elliot Alderson’s therapist Krista Gordon.  It’s good to see Elliot getting therapy again, but will he pay attention this time and follow Krista’s advice?  Krista reminds Elliot that it is his birthday, which apparently he forgot.  The conversation then turns to Elliot’s discussion about his family.  He recalls a memory from his childhood with his sister Darlene where they made a snowman in the image of the character of Kevin McAllister from the popular holiday movie Home Alone. Then Elliot reveals to Krista that his father pushed him out of a window.  Krista is shocked by the revelation and Elliot — with a puzzled look on his face — swears he had shared this secret with Krista before.

In the following scene, Joanna Wellick appears on a national TV show called “Let’s Be Frank” with Frank Cody.  She speaks on the murder of Sharon Knowles.  Although we know who actually killed Sharon, Joanna lies on TV and says that her husband Tyrell is innocent and that Scott is a troubled man who’s been fixated on their family for a long time.

Next, we see Darlene being interrogated, after a new F-Society video has surfaced, by FBI agents including Dominique DiPierro. We find out that Darlene has been acting as a confidential human source for the agency and is assigned to get intel from Elliot on Tyrell Wellick to avoid going to jail. DiPierro plays an audio recording of Tyrell chatting with Elliot; it was unbeknownst to Darlene that the two had a connection.

Mr. Sutherland is driving Joanna Wellick in the following scene and pulls over to confront a distraught and emotional Derrick.  Derrick still has it in his head that he and Joanna still have a solid tryst between them.  Derrick threatens to tell the authorities about his coverup about Tyrell and Sutherland threatens his life if he ever exposes their secret and tells him bluntly never to contact Joanna again.

In an unexpected turn of events, Derrick approaches the driver’s side of the vehicle and shoots Mr. Sutherland in his stomach.  He then walks to the back passenger side of the vehicle and shoots Joanna in the head execution style.  When Derrick walks back to the front of the vehicle, he stands in horror taking a moment to think about what he just did, giving Mr. Sutherland one last chance to fire a bullet, killing Derrick instantly.  The only person left alive at the crime scene is Joanna’s infant who’s crying in splattered blood.

DiPierro is standing in the coroner’s office examining the body of Joanna Wellick.  While DiPierro believes Darlene, her partner, however, does not, which places her in a precarious situation as an investigator and someone who empathizes with the Alderson family.

Darlene and Elliot meet at Coney Island and the two exchange a dialogue briefly about how their father impacted their childhood.  Towards the end, Elliot explicitly tells Darlene that he wants her to stay the night with him and he doesn’t want to be alone.  Is Elliot feeling suicidal?  Is he losing control over his depression?

Phillip Price, CEO of E Corp, says that there is an illegitimate monetary imposter that China has adopted called Bitcoin.  He says that China has not signed the accord weakening the economic state and they have declared a currency war. Price and Whiterose have a brief exchange in which Price insists that Whiterose sign the accord. Price refuses and wants his U.N. vote instead.

When Darlene tries to sneak out of Elliot’s apartment while he’s asleep, he wakes up and asks her what she’s doing. As Elliot grabs her and demands her to answer her question, she realizes that Mr. Robot has taken over Elliot’s personality and she runs out of the apartment after calling him a “psycho.”

When Elliot meets with Krista, he asks her if she can talk to Mr. Robot.  She then asks him to close his eyes and tells Elliot to give him permission to reveal himself.  In a dramatic moment performed by Rami Malek, we see Elliot’s face, but we hear Mr. Robot’s voice. When Mr. Robot reveals himself, Krista finally sees this alternate personality Elliot has been fighting with for the last two seasons.  She tries to talk to him, but he refuses to let Krista get in his head.

Whiterose then declares that Stage 2 needs to launch the day of the U.N. vote, and he doesn’t care whether it’s successful for not.

DiPierro, running surveillance on Darlene’s apartment, sees Elliot breaking in and realizes that they’ve been set up by Elliot as they see him on the video camera.

I finally see the fatal exception error of my ways and I know what to do now, I am going fix the world I broke and put it back together better than it was before.” – Elliot Alderson

Elliot is unhinged, Joanna dies, Darlene doesn’t know all of the facts, Krista sees Mr. Robot and Whiterose is ready to carry out his vendetta. This episode was tense, unpredictable, and made me question if I even really know who Elliot is and what his motives truly are.