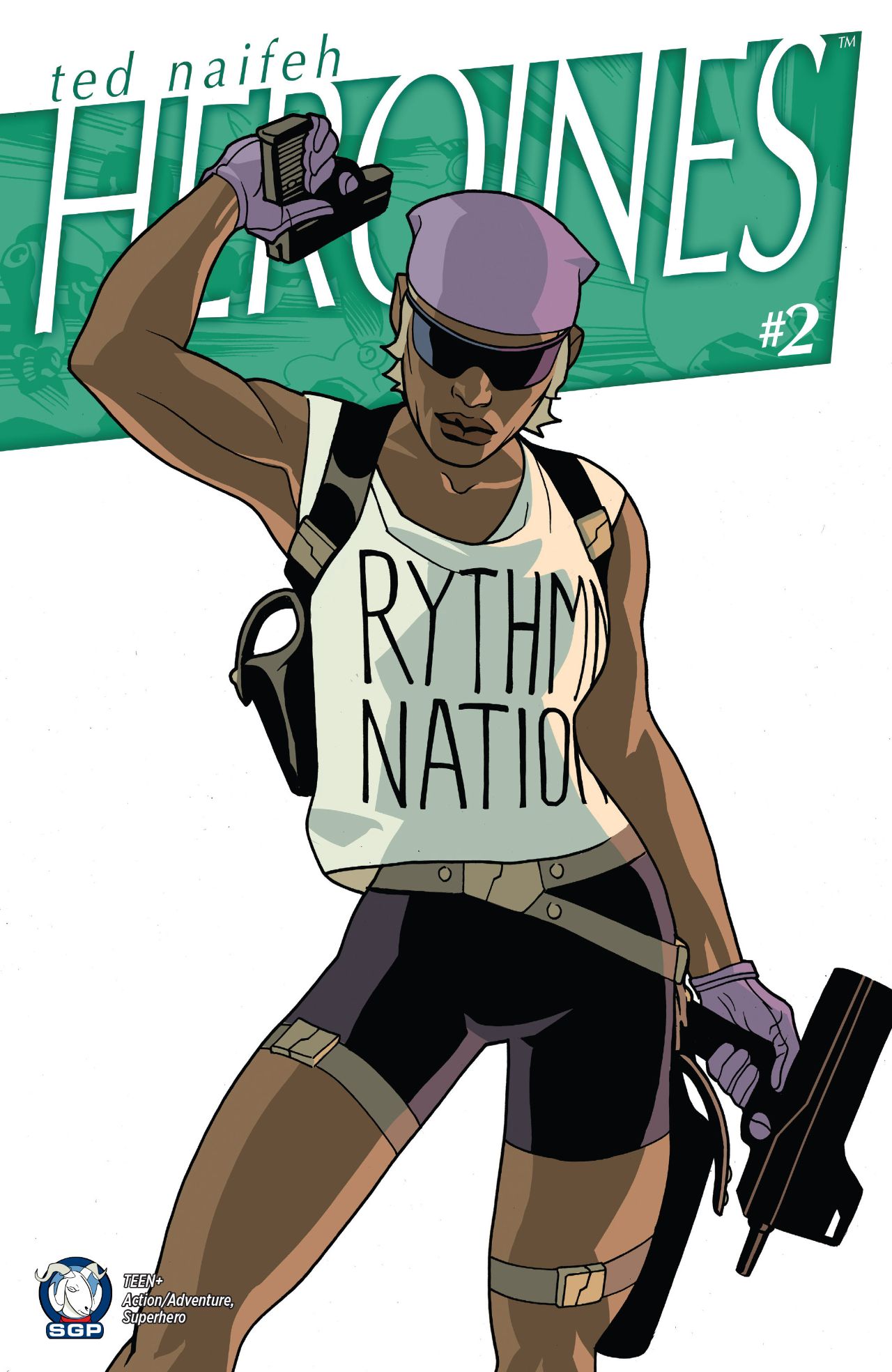 Black Girl Nerds got the chance to chat exclusively with Heroines creator Ted Naifeh on his new book, and much more. Take a look!

TED: For starters, I love superheroes. They embody something I think is important right now: personal empowerment. There’s no other genre that better captures the idea of the individual taking symbolic responsibility for their world. I think that’s compelling as hell.
That said, the genre is rife with redundant stories, rote repetitions of stale ideas. It could use shaking up. That’s what I wanted to do with Heroines – poke fun at cliches and maybe examine the reasons behind them. I also wanted to bring up some potentially controversial subjects that other superhero comics tend to avoid, or might botch while they’re trying to please everyone. I don’t want to tiptoe around issues. I want to explore them.

What made you reach out to Black Girl Nerds to review it?

It’s a site with a strong voice. You guys do tight, well thought-out reviews and articles. And frankly, you have a broad readership I was hoping to appeal to. The insider comic book world is all very well, but I tailor my books to a more casual audience. Heroines is designed to be an easy-access superhero comic, for an audience who likes superheroes, but not necessarily the byzantine continuities of Marvel and DC. An audience who wants comics that explore progressive issues. I was hoping to reach some of that audience through you, actually.

The illustration of the man introducing Marcy on this link, looks like you, Ted. Is it you in cartoon form?

Am I Bolt? God, I hope not. For starters, I got old and grew a mustache. Anyway, I wouldn’t want to be that guy. He’s got cool superpowers and all, but he’s kind of a clueless douche-bro.  I wonder if there’s some subconscious thing going on there… 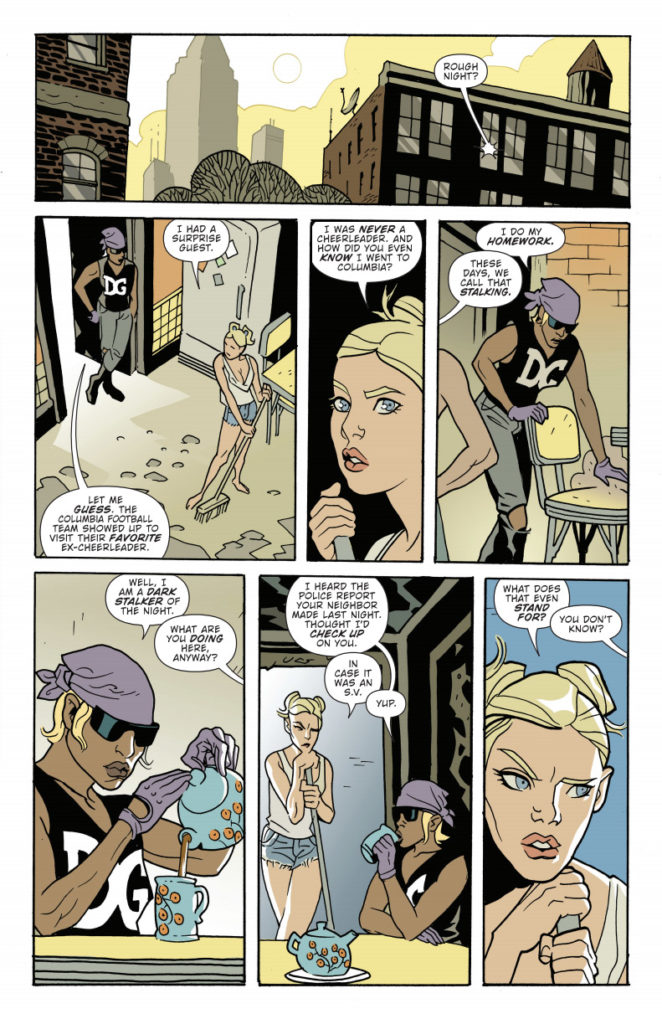 What makes you a Heroine?

In the context of this book, what makes a heroine is the will to fight for what’s right in a world that’s  trying to silence you, belittle you, or manipulate you. And the willingness to acknowledge people the world, and your own instincts, are telling you to ignore and silence.

Heroines is a story about people who want to make the world a better place, but feel like no one wants their input. I think anyone can relate to that. It’s a pretty universal experience. The question is, does the reader WANT to relate to these particular characters. Regardless of whether it’s a good story, does the very fact that it’s about women disqualify it from being universal for some people? If that’s the case, what does “universal” even mean?

I try to write characters from the inside out. I don’t think, “what would a woman do?” I think, “If I were this character, with this background and these experiences, what would I do?” You can’t just build characters out of behavior you observe. You have to empathize with the motivations behind it. Many a male writer depicts female characters as how he thinks women behave (or how he wishes they’d behave), rather than how he would behave under the circumstances of being a woman. To my mind, if you can’t understand why a character is who they are, you have no business writing them at all. Even antagonists deserve the writer’s empathy. Otherwise they come off as puppets and straw men.

“Except that HEROINES is not necessarily mainstream. It’s actually a story about marginalization, and how it silences people, a subject I consider especially relevant today.” With social media giving everyone a platform to gain fame, how does HEROINES aspire it readers not to be silenced?

Heroines is about this young woman, Marcy, who’s freshly graduated from Columbia University, has a couple of black belts and a cool superpower. She decides that instead of “being successful,” she’s going to devote herself to making the world a better place. Except no one takes her seriously. Of course, she screws up a lot, sometimes in hilarious ways, and makes a fool of herself. And she puts herself and her loved ones in danger. So plenty of people say, “See, you don’t know what you’re doing. Stop!”

So this is really a story about believing in yourself in the face of those who think you have nothing to offer. Or worse, people who claim you have nothing to offer because they don’t actually want the world to be a better place. It’s not about easy answers. It doesn’t exactly sugar-coat things. It’s just a funny, and hopefully inspiring, modern parable about making a difference. 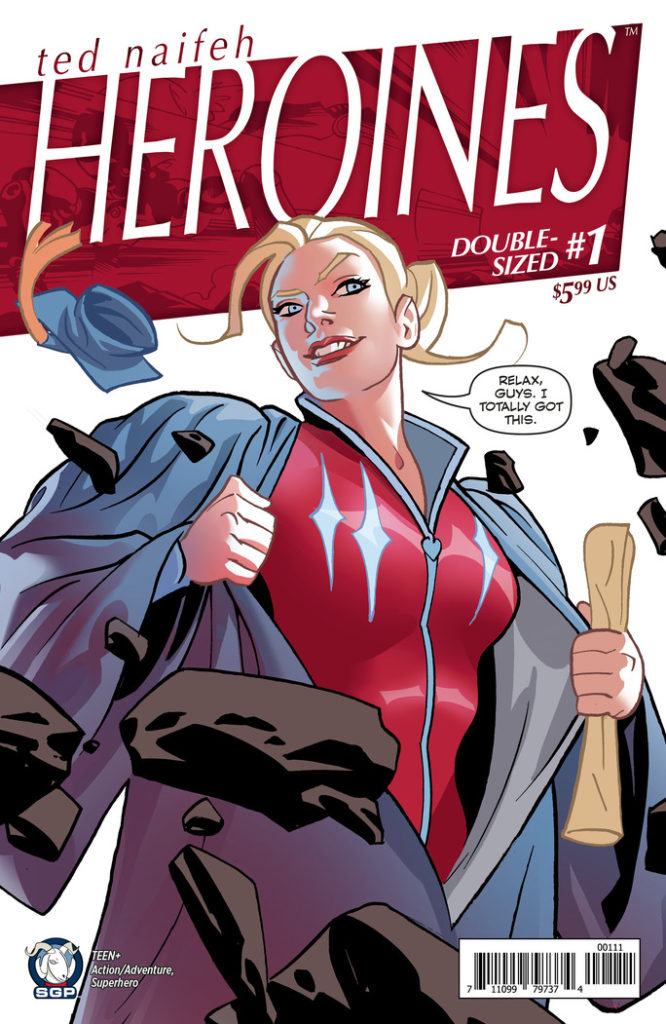 Are you the creator as well as the illustrator?

Yes, I write and draw and color the book. But I don’t letter, because I suck at it.

I think something wonderful can happen when the story and art come from the same inspiration. Half the storytelling happens in the drawings, the little nuances I hadn’t written into the script, or just subtleties that might not have come through if the artist wasn’t literally inside the writer’s head.

Are always going to remain an indie artist when it comes to the promotion of HEROINES? Are do you want to get your comic sold world wide by retailers — why or why not?

Being independent doesn’t mean I don’t want world-wide distribution. Some of my other works have been translated into half a dozen languages, and are available all over the world. Being independent just means that I’m not generating a corporate property. My first priority isn’t to make a buck, but to tell the stories I want to tell.

But I’m not looking to make a piece of impenetrable avant-garde obscurity (not that there’s anything wrong with that). I just want to explore modern social issues head-on. It’s not my intention to stir up controversy, just tell a compelling, relevant story. But if I do, all the better. I think controversy can be good. It gets people talking about important issues, which beats the hell out of silence.

Are your other comics still in production or were they just limited series?

Everything I do is limited, because there’s only so much time, and one day, I’ll die. But Night’s Dominion will continue for a while. I still have one more Polly and the Pirates tale to tell. And I have plans to continue Heroines for at least two more arcs.

Courtney Crumrin, my most popular book, is all done. Which may be part of why it’s popular. I think stories aren’t truly stories till they end. Every story begins by asking a question, and ends with some kind of answer. How can a young lady like Elizabeth Bennett get married? If John McClane’s wife becomes the breadwinner, what is his value?

A mediocre series can be elevated by a great ending, and a fantastic tale can be ruined by a bad one. But a serialized story that doesn’t have an end isn’t a story at all, at least to my mind. It’s just a bunch of imaginary stuff happening, to no ultimate purpose. I’m very cautious getting into serialized media, because it often asks questions it will never answer. Lost was a great example of a serialized story with no interest in closure. And so its intriguing questions were rendered ultimately meaningless.

This is why I’m such a big fan of closure. Even if I fully intend to continue, I try to make sure every arc could be the last word in a series. I want people to get their money’s worth. Closure is undervalued comics, but I find readers really appreciate it. Especially in this age of open-ended storytelling, empty foreshadowing, endless cliffhangers, and mysteries that never resolve. 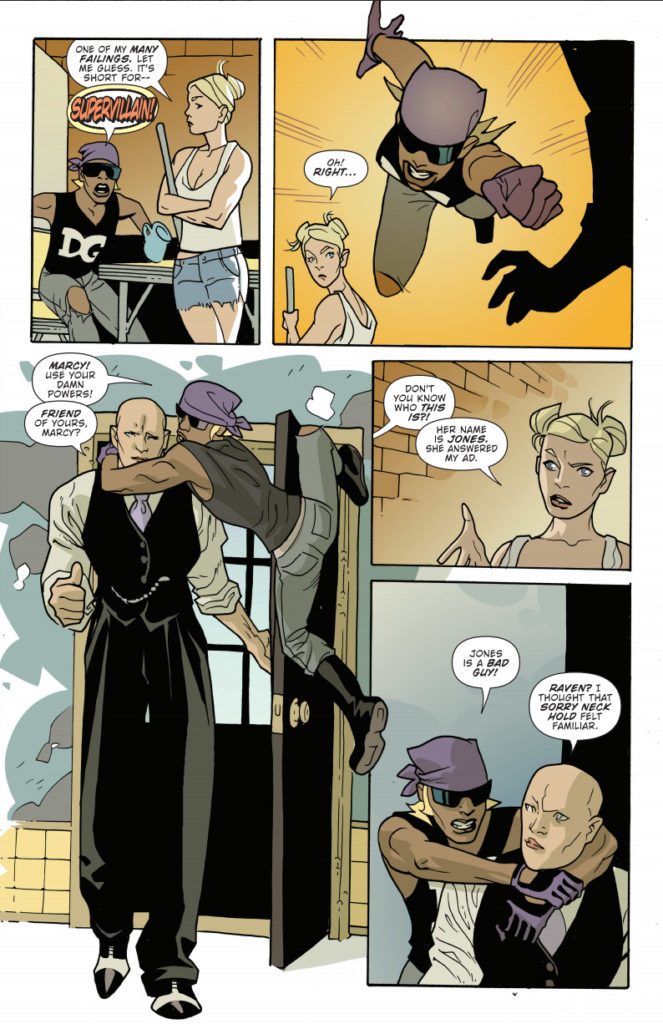 What comic character, artist, illustrator and/or company/brand would you enjoy collaborating with and why?

As for artists, two come to mind immediately. Becky Cloonan and Tess Fowler. I had the honor of inviting Tess to draw an alternate cover for Night’s Dominion, but I’d love to do a miniseries with her. Though I think she’s a bit busy. And Becky, forget it. Hardest working woman in comics. I also love Dustin Nguyen, though I’d have to get in a long line for him too. Seriously, if you don’t know these names, google them. So much talent.

There are also many writers I’d like to work with. Paul Dini, Gail Simone, Kelly-Sue DeConnick. Alex De Campi and I talked about working together. But drawing a book takes so much more time than writing. I don’t even want to start down that road. I have too many of my own stories to draw.

As for characters, I love the Batman family and would enjoy playing in that sandbox. I personally feel that Catwoman has the potential to be the most important character in superhero comics — fiercely independent, tight-roping the razor’s edge between hero and villain. But the current mood at Marvel and DC is way too continuity-centric for my taste. Both companies are so concerned with selling a dozen series to each fan, it seems like individual comics get choked on continuity. I like the idea of a shared universe, but these days, it feels more like a burden than a rare treat. And I’m just not interested in picking up where an existing character has left off.  I could try retrofitting stuff like diversity into outdated characters from decades past. Its been done well before. But I’d rather start fresh with new characters, and build new ideas into their DNA.