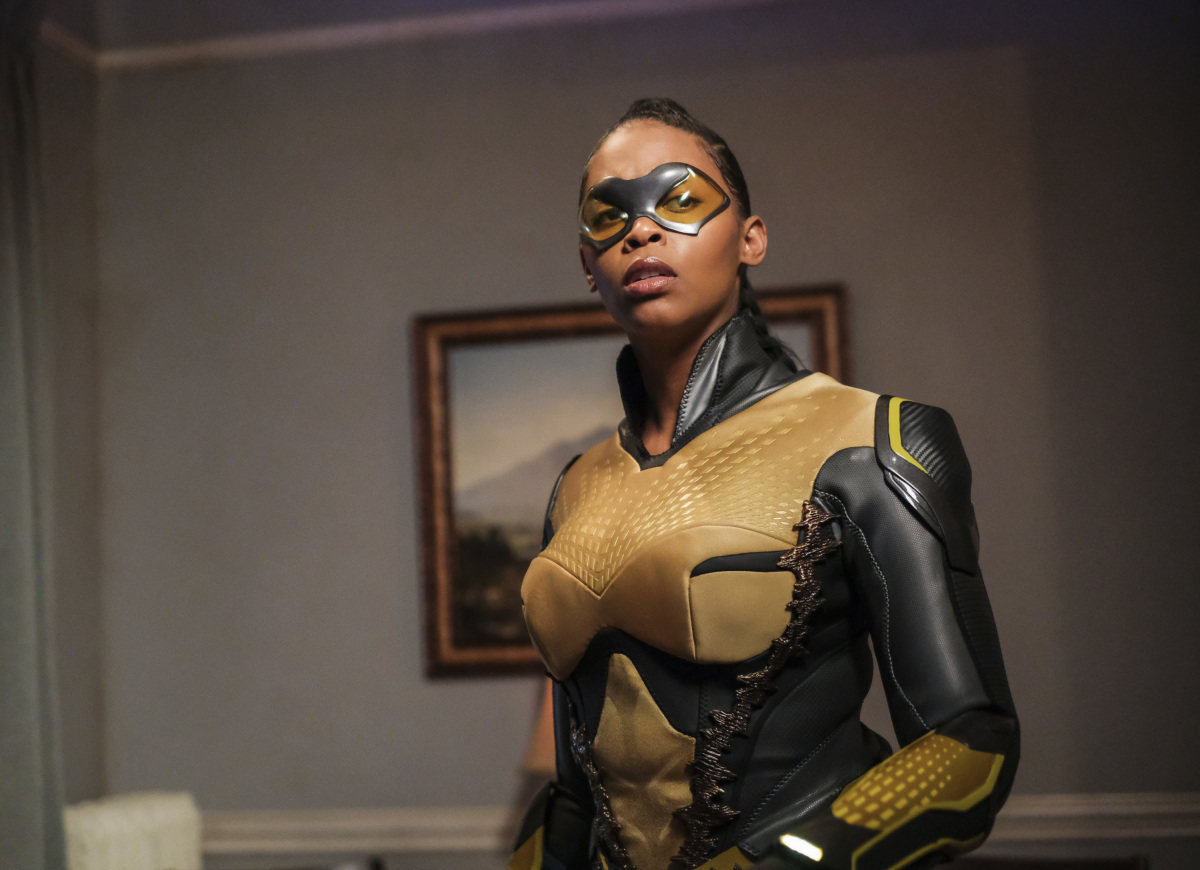 Anissa Pierce is the extraordinary daughter of Jefferson and Lynn Pierce in the show Black Lightning.

Over the past three seasons, we have watched Anissa grow into an even more resolute, intelligent, and openminded young woman, who happens to also be two different superheroes: Thunder and Blackbird. The show does an excellent job of highlighting Anissa’s superhero character evolution, but I feel like the unsung hero of Anissa’s character evolution is her as a lover.

In Season 3 of Black Lightning, we get to see Anissa apply those strong characteristics that she has as a person and superhero (resolute, loyal, etc.) to her love life. So, for this article, I would like to take a stroll down memory lane to highlight the evolution of Anissa as a lover. She has evolved from that emotionally unavailable lover that you should probably never get attached to, to Season 3’s “I don’t care that you’re a leopard, or an old man, or a shapeshifter. I love you,” softest lover that there ever was.

The first time we are introduced to Anissa as a lover, we find her in bed with her ex-girlfriend, Chenoa. She is corny, to say the least, but still charming. Anissa doesn’t have the most game, but she doesn’t need it; she is attractive, smart, ambitious, and you know, all the things that you hope to find in a romantic partner. After Anissa charms Chenoa and the viewers with her corny pick-up line, we get the first inkling of a red flag. Chenoa tells Anissa that she wants more from their relationship. Rather than Anissa being honest with her intentions regarding their relationship, she manipulates the conversation to victimize herself. Not only is this the first sign of just how emotionally unavailable Anissa is, but it also exposes a manipulation tactic that she will continue to use to justify her self preserving behavior. In Anissa’s defense, she was reeling from the trauma of being kidnapped and almost forced to be apart of a sex trafficking ring.

The second time we meet Anissa as a lover, she is “innocently” inquiring about a pretty stranger’s reading list. The stranger happens to be Grace Choi. As a comic fan, it is an exciting moment, because who doesn’t love ThunderGrace! But, objectively, Anissa’s wandering eyes are a bit trifling. Even though she and Chenoa were having problems, they were still in an exclusive relationship.

The third time we meet Anissa as a lover, she is at a party dancing with Grace after avoiding her girlfriend Chenoa. When Anissa is confronted by Chenoa, she gets defensive and uses her manipulation tactic with the line, “I’m not cheating, unless dancing in spandex is cheating.” This is true, but the entire situation is trifling, and it is all because Anissa was not being honest with Chenoa by saying she was not emotionally available. This scene is pivotal for Anissa’s love evolution. It is where the seed of growth is planted because she does open up and confide in Grace by the end of the party.

The fifth time we see Anissa as a lover, the hints of a selfless protector and caregiver come out. Anissa and her new friend Grace are being harassed. Anissa fights the bad guys off and protects Grace with her superhuman abilities. But, you could argue that she would do that for anyone, not just her romantic interest. However, when Anissa is taking care of Grace, this is the first time we see a bare and soft side to Anissa as a romantic partner. She showcases her ability to be endearing and gentle. It’s subtle, but promising nonetheless.

The sixth time we see Anissa as a lover, she gives us some deja vu of her old ways. She gives Grace some similar treatment that she gave to Chenoa at the party, but worse because Grace and Anissa were not in a relationship. However, after a sisterly check from Jennifer Pierce, Anissa has an open and honest conversation with Grace, apologizing and asking to take their relationship seriously.

The seventh time we see Anissa as a lover, we see her in her most vulnerable and honest state. She believes that she has lost her Uncle Gambi, and she tells Grace just how much she means to her. It’s a beautiful moment. Grace shares her fears concerning Anissa and rather than Anissa using her manipulation tactics (#growth), she listens to her.

The eighth time we see Anissa as a lover, she is carefree in love with Grace. However, Anissa is so caught up in the love and fun of her new relationship that she is oblivious to the obvious omissions that Grace is beginning to show. Anissa is ready to take her relationship with Grace to the next level, and Grace literally pulls an “Anissa” on Anissa but to the extreme and disappears.

The ninth time we see Anissa as a lover, we see a resolute woman in a broken state of love, desperate to understand why Grace has left her. Anissa’s family raises their concerns about continuing her search for Grace and she even finds a new love interest in the meantime, but nothing can shake Anissa’s undoubted love of Grace.

The tenth time we see Anissa as a lover, she professes and shows all of us just how deep her love is for Grace. Grace shows up out of the blue and tries her best to tell Anissa not to love her, but nothing can shake Anissa’s resolute love for Grace (even Grace!) And she delivers my favorite ThunderGrace scene of the season, thus evolving from the emotionally unavailable lover that you should probably never get attached to, to this current season’s “I don’t care that you’re a leopard, or an old man, or a shapeshifter. I love you” kind of lover. It has been beautiful to watch!