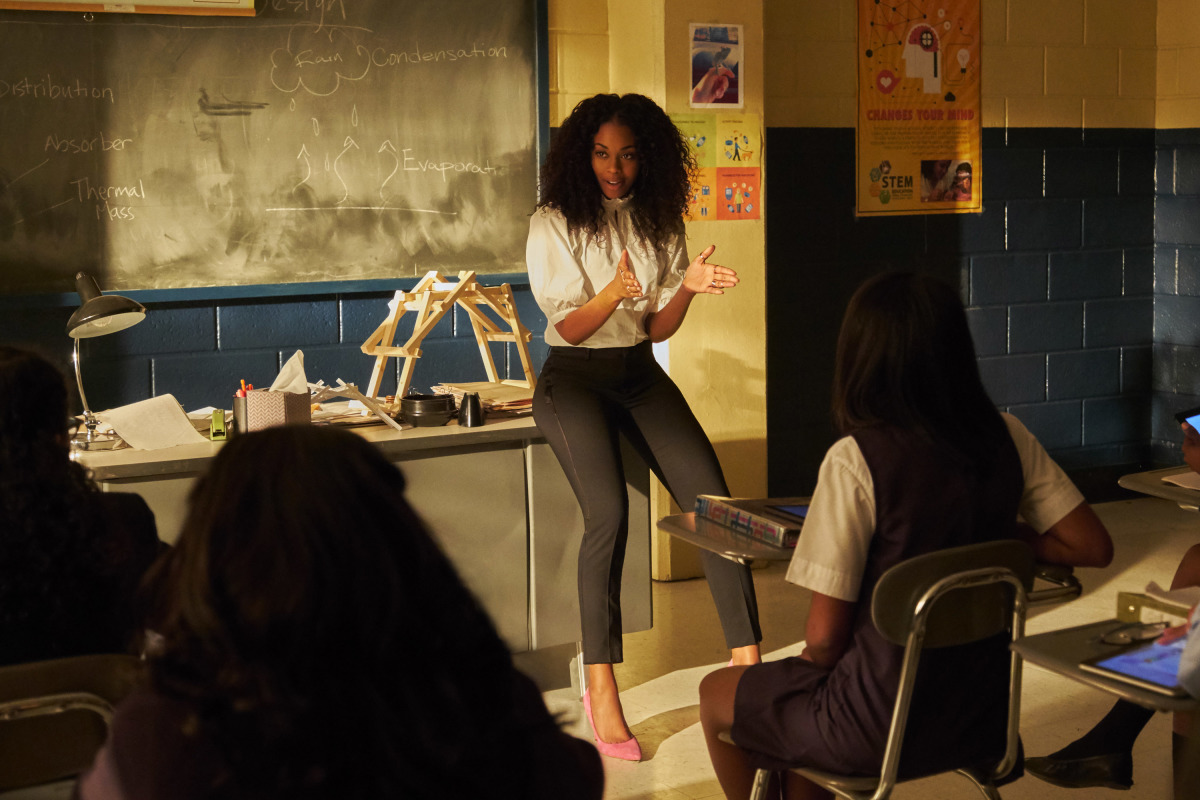 When I first saw the trailer to the CW’s Black Lightning I said, and I quote, “Sign me the eff up,” but that eff was a bit more vulgar. My black girl joy shot through the roof when a poster was released of Nafessa Williams as the eldest Pierce daughter, Anissa. Seeing a black girl decked out in heroic gear was like a representation beacon being shot into the sky, but there was one other detail that had me retweeting her picture with an all capped exclamation of “AH” – complete with about ten exclamation points.

Friends were tagging me on every single post that celebrated her as television’s first Black, queer, superheroine because if anyone’s going to be pumped for Black queer girls, it’s other Black queer girls. We’ve been wanting more representation for decades, so when news broke that we were going to be getting it every Tuesday night? I was already going to watch Black Lightning, but now I would make sure my entire schedule was clear so I could spend time on my couch, a bowl of popcorn, and the Pierce family.

Unfortunately, logic reared its ugly head and I wondered… how queer would Black Lightning let Anissa be? Just because it sayeth in the comics doesn’t make it so on television. That’s not to say I needed her to have a rainbow-colored super suit, but I’ve been burned by shows and movie’s preemptive WE HAVE QUEER CHARACTERS hype before – cough cough Beauty and the Beast cough cough Power Rangers (though I am a bit more forgiving with this one). When creators out their queer character before I see them in action, especially when they’re the first of their kind, I have certain… expectations. If you’re this proud of the character, I want to see that reflected in the story. They should be queer because they’re queer, not because the director told me so. Black Lightning was talking the talk, and I’d give it some time to attempt to walk the walk.

It only took two episodes, and, y’all, Anissa Pierce is everything.

A lot happened in the second episode of Black Lightning, but the scene with Anissa and her girlfriend sticks with me for all the right reasons. Prepare for spoilers and general gushing.

Anissa is ALREADY out.

Hey there, media, let’s have a chat. I know it’s important to show our coming out stories as they can be an inspiration to others. But, you know what’s also refreshing to see? A character who is already out and who already accepts who they are! Now I don’t mean the sassy gay friend who’s out, proud, and catty, I mean an actual, well-developed character who is treated as an asset to the story beyond their witty banter. I came into Black Lightning thinking that Anissa was going to either: a) discover she’s queer through crushing on a girl and start questioning herself, or b) have a vaguebook queer relationship where we’re given table scraps instead of a full meal (and yes, I know her canon love interest has been cast, but please refer to my previous comment about canon not always making it to TV). Instead, we see Anissa in bed with a girl she’s apparently been with for a year. Guess that closet door’s been blown open!

Her stress isn’t from being out.

In the scene Anissa shares with her partner, she’s obviously distracted by something. Immediately, images sprung to mind of a girl who hadn’t told her parents about her relationship, trying to find the right time to open up to them. Just because she was out didn’t mean she was out to mom and/or dad… but that’s not what Anissa’s worried about. Her girlfriend points out the fact that she was, you know, held hostage by a hostile gang before being saved by Black Lightning. Anissa points out that she broke her sink. I am so beyond here for Black queer girls who are allowed to be concerned about everything else BUT their queerness. With everything that’s happened to Anissa in the first two episodes, I’m fairly certain that the last thing on her mind is her sexuality.

As a queer woman of color, I can tell you that there are some days where I do think about how people perceive me – it’s hard not to in the world we live in. But the keywords in that statement are some days, not EVERY MOMENT OF MY EXISTENCE. So yeah, Anissa should be questioning how the hell she decimated her sink with her bare hands. More than that, I am so beyond here for a show where queer intimacy is seen as a form of comfort after a traumatic event – along with therapy. T.H.E.R.A.P.Y, y’all! A queer Black woman on network television was allowed to discuss her mental health WITH. HER. GIRLFRIEND.

Her parents know (and are ok with it.

It’s like Black Lightning saw me bouncing up and down on my couch and said, “But wait, dear queer girl, there’s more!” Not only do Jefferson and Lynn already know that Anissa’s queer… they accept it. In fact, it’s not really a topic of discussion. “Where’s Anissa?” “Oh, at her girlfriend’s house.” That’s it. There’s no parental conversations on confusion or phases, no lamenting about how hard life is for a Black queer woman. They’re smiling and happy about Anissa having someone – even if they can’t remember her name. They see the queerness as a positive, especially after everything that’s been going on. Yes, Anissa’s out the house, enjoying herself, and lord knows she needs to.

I can’t think of a time where a show calmed down my fears and elevated my happiness about Black queer representation so quickly. Thank you, Black Lightning, for allowing me to #GetLit about positive Black girl queerness. If this is just the first two episodes, I can’t wait to see the rest of the season.