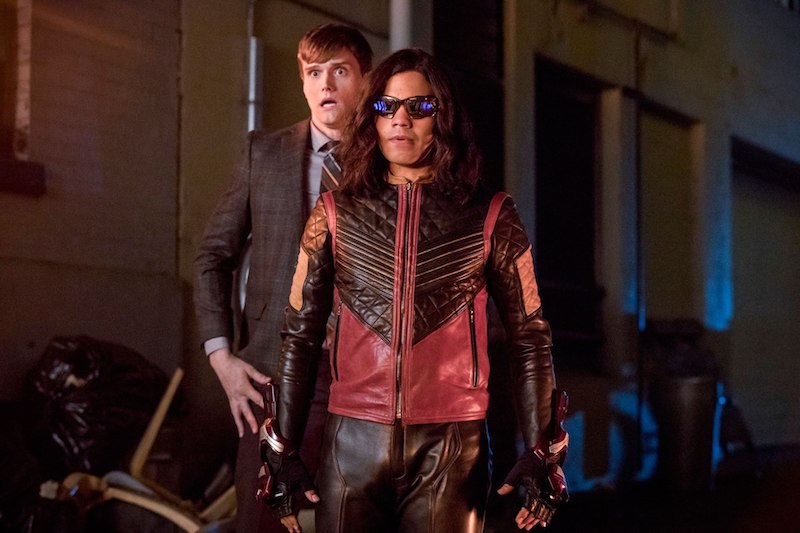 While the fourth episode of The Flash introduced the newest member (Ralph Dibny as played by Hartley Sawyer) to Team Flash, other far more interesting introductions were made. Namely the introduction of Gypsy’s father, Breacher, who spends much of the episode hunting down Cisco. Though the Cisco/Breacher story arc follows well-worn tropes (overprotective father dislikes his daughter’s new boyfriend), it produced a few good laughs. However, the introduction of Wally West’s replacement (Ralph Dibny), temporary or otherwise, was no laughing matter. Here are the highlights from “Elongated Journey into Night.”

Cisco Ramon And Gypsy are Getting Serious

The Cisco and Gypsy relationship arc is probably one of the best things about the new season. It’s great to see such a widely loved character get screen time that isn’t relegated entirely to Nerdom. And the chemistry between Carlos Valdes’ Cisco and Jessica Camacho’s Gypsy is FIRE!

This episode commences with a super-hot Cisco/Gypsy make-out scene. In between their breathy kisses (dang!), Cisco casually asks Gypsy her real name. As previous episodes have revealed, Gypsy plays her cards close to her chest, so it’s no surprise when she doesn’t share her birth name, explaining that she likes to be mysterious and prefers her meta-human name to her real one. Cisco is cool though and doesn’t pressure her, happy enough to go on with their relationship as is, though we all know that these two are total two love birds.

Anyway, Cisco and Gypsy’s relationship is put to the test when Gypsy’s father, Breacher (Danny Trejo) makes an unexpected visit.  As is typical of Trejo’s acting style, he comes off as a man of few words and proceeds to scare the living hell out of Cisco. Breacher is of the mind that Cisco isn’t good for his daughter and proceeds to spend the entirety of the episode hunting Cisco down. He sets some ground rules for the hunt, explaining that neither of them are allowed to use their vibe powers. This intimidates Cisco, who spends much of his time hiding and confiding in HR Wells. Fortunately for Cisco, Wells reminds him that most of his abilities come from his genius level IQ and suggests that Cisco use his engineering skills to defeat Breacher. Cisco attempts this, but it doesn’t work out well for him and he’s on the run again. It’s not until Cisco is willing to fight Breacher to protect the life of new teammate, Ralph (ugh) that Breacher finally finds that he can respect Cisco and the two make peace. By the end of the episode, Cisco discovers that Gypsy’s name is Cynthia, though he will continue to call her by her preference of Gypsy. (Many people find this problematic, as the word “gypsy” is a considered a racial slur towards the Romani people, so we’ll try to use Cynthia when we can now that we officially know her name.)

Welcome to the family Cisco!

Sorry Flash, but the new guy SUCKS (no offense to actor Hartley Sawyer)! Ralph Dibny is annoying, unscrupulous, unlikable, and beyond irritating. Ugh, it’s no wonder Barry Allen spent much of the episode dissing the private eye.  Sure, Ralph is purposefully written this way, but dang, this dude is replacing Wally West?! Who else is pissed about this Mr. Fantastic wannabe?

Apparently, Team Flash is cool with Ralph, though it took Barry some time to warm up to him. Ralph was a detective when Barry first joined CCPD and was responsible for planting evidence during an especially gruesome case. Five years after Ralph’s firing from CCPD, Barry’s dark matter investigation leads him right to Ralph’s front door. When Barry and Joe question him about his exposure to the dark matter, they find him unhelpful. It soon comes to light that Ralph lied about his dark matter exposure when he exhibits meta-human abilities after a run in with a few henchmen. Turns out he has the ability to morph and stretch his body much like Mr. Fantastic. Except, Ralph is no Mr. Fantastic. He blackmails people, eats too many donuts, and holds animosity towards Barry for ruining his career.

As Team Flash tracks down the thugs that tried to murder Ralph, they discover that the Mayor of Central City is behind everything. Turns out the Mayor cheated on his wife and Ralph tried to blackmail him with photographs of his trysts. When the Mayor kidnaps Joe West as a last resort, it’s Ralph that helps to rescue him after Barry reveals his identity as The Flash. Soon after, Barry offers to train Ralph and welcomes him to the team.

The addition of Ralph is expected, he is in the comics after all. However, the way Wally West was done last episode was soo dirty. It’s just too soon to add a new guy into the mix. Though there are rumors that Kid Flash will return this season, it feels weird to replace him with this dude.

Is the Thinker an Old Enemy?

One of the only good things about the introduction of Ralph Dibny is that he was able to provide some information on the shadowy figure behind this season’s baddie, The Thinker. Ralph reveals that his lead on the corrupt Mayor was provided by a Mr. DeVoe. At the mention of DeVoe’s name, Barry remembers that he’s heard the name before, during the Savitar era. Is The Thinker really Mr. DeVoe or one of DeVoe’s partners?  And is he playing some temporal long game? We’ll just have to wait and see.