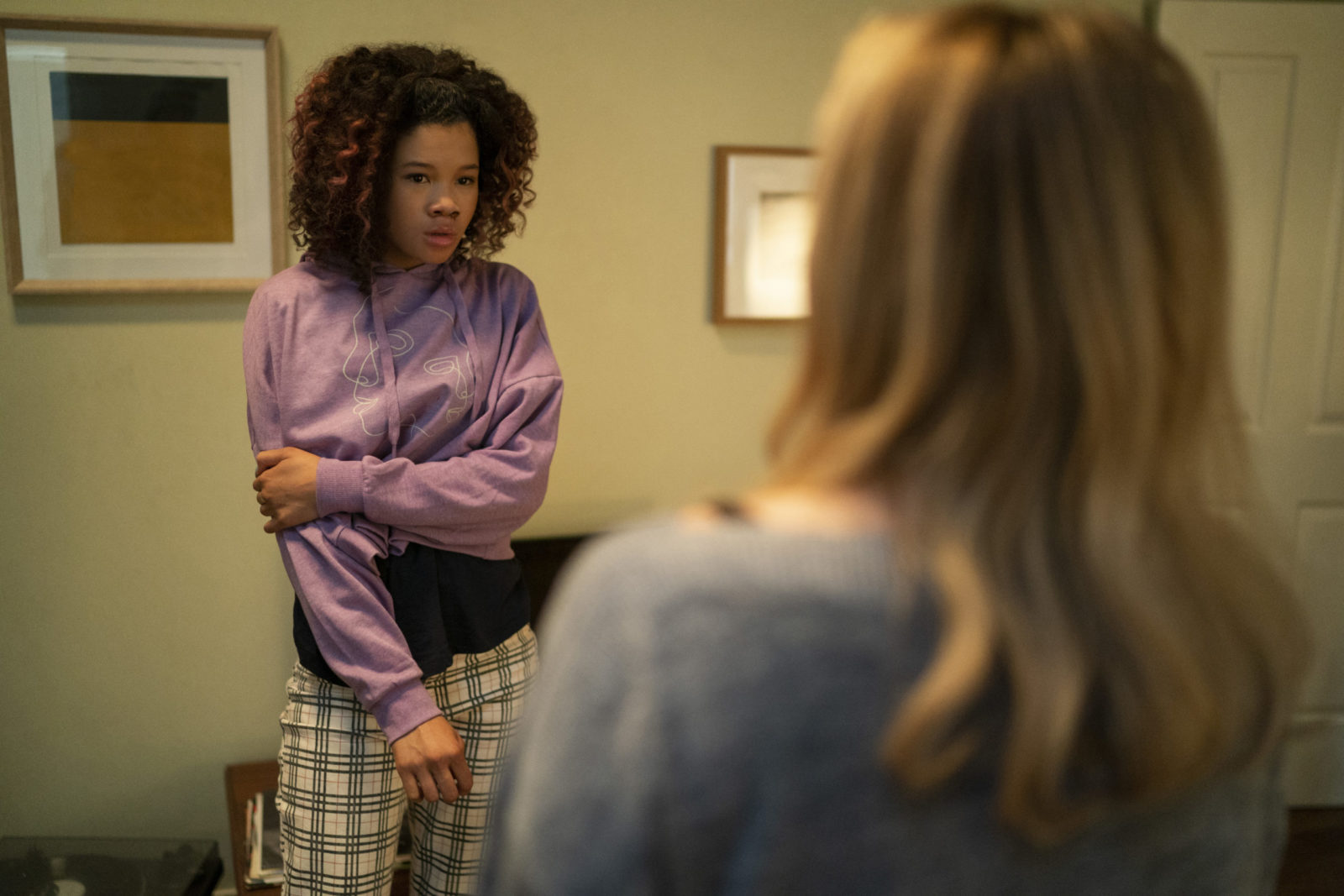 Storm Reid, most notably known for her work in Disney’s Wrinkle In Time and the time travel thriller Don’t Let Go, appears in the Blumhouse film The Invisible Man.

Reid plays Sydney, the daughter of James (Aldis Hodge), who Reid describes as a fun-loving teenage girl trying to find herself. She loves fashion and has dreams of going to Parsons School of Art and Design; however, some circumstances change the course of her adolescence as well as her relationship with her father and Cecilia. In the film, her world is turned upside down, and she’s trying to figure it all out.

I asked Reid what exactly Sydney’s relationship was like between her father and Cecilia:

“Sydney and James have a very close relationship because her mother is not in the household anymore,” she told me. “So it’s just them two. They’re basically best friends. And of course, they butt heads, like any parent and young teenager does, but they love each other. Cecilia has kind of become a mother figure to Sydney. So she has a lot of love for her as well. Just to see her going through these tough situations breaks her heart, but she will try to do anything to help save her.”

Reid doesn’t classify The Invisible Man as a horror film, but more or less as a psychological thriller. However, what she does find horrifying and scary is the idea of people having the power to control your life.

“What Adrian does to Cecilia is terrible. He’s a person who has a lot of money, and that comes with a lot of power. So he’s able to do a lot of things to her and to act invisible in a way. I feel like that is happening in this day and age, even with the internet — people being able to just hide behind a computer screen and be a cyberbully or be a troll. We implement that in the movie as well. So we live in a scary time.”

When we spoke, Reid had not yet filmed the scenes where she interacts with the invisible man (interacting with something that’s not there), so when she was asked how director Leigh Whannell instructed her on those moments, here’s what she had to say:

“I actually haven’t gotten to those scenes yet. It’s only one part of the movie where I have to really deal with that. But I think I’ll just pull from my knowledge of [A Wrinkle In Time] where I had to be flying in the air and looking at these fantastical things that wasn’t really happening. So Miss Ava helped me with that. I’ll just take those skills and bring them here.”

Storm Reid has definitely covered a lot of material in her short yet impressive career as an actor, from a fantasy big-budget studio film to a deeply mature TV series about teenage relationships in HBO’s Euphoria. Reid expands on how the material she picks for her serves a purpose.

“I’ve been told that I’m very mature for my age. I’ve always been very mature for my age. I’m an old soul. So I do definitely feel like the material that I pick, whether it’s heavy or not, I just want to be a part of something that has a purpose. And, that is telling a story. That has an impact to the point where I try to surround myself with people who have the same interests as me. Not acting, but like you have to be able to have a conversation about politics and what’s going on in the world. And not just surface things, because I don’t think that would be benefiting either one of us. So I tried to implement that in my acting and my real personal life.”

Reid adds that this story will not be a damsel in distress kind of narrative either. Although James and Sydney are there to support and help Cecilia, Cecilia ultimately is fighting her battle on her own. Reid says, “She’s really taking this on and betting on herself to be the light in the darkness.”

I asked Reid if Sydney have any of the similar problem-solving skills her character Ashley had in Don’t Let Go.

“Sydney is young, and she’s still just really trying to find herself. She is not naive. Once she does realize that Cecilia is going through something and that she is telling the truth, and she’s not just losing her mind, Sydney is able to try to grapple with that and try to help her and try to help herself. But again, with this film, she is kind of on the sidelines and just letting the adults take care of everything. When she needs to step in and needs to put her input into something, then she does. I felt like that is important to be able to show the narratives of kids as well. I feel like Gen Z is the present and the future. So we are listening to them and listening to us, essentially, then we can make a change.”

As far as working with filmmaker Leigh Whannell, Reid describes him as a joker on set. However, he certainly does have a vision.

“He’s a big jokester, which I love. He’s always just cracking jokes and laughing on set, but he is very hands on. And he does have a vision, and he does know what he wants. But he also lets the cast put their creative input into what they want to do and how they feel the scene should be going. It’s good to form a bond with people on set so you feel more comfortable with being able to express how you feel. You have a trust.”

When speaking about her experience on set, Reid elaborates on how she’s grown as an actor.

“I feel on every set, I learned something different. Whether that is with my castmates or the director, or just the environment I’m in, I just always feel super inspired. But this one, in particular, I feel because I haven’t been here, there was a gap where I was kind of on set and off set. Finding and being connected to my character, but also being able to come back to me and live in me, and just knowing that my character’s reality is not my reality. So that’s always a great reminder with any of my characters.”