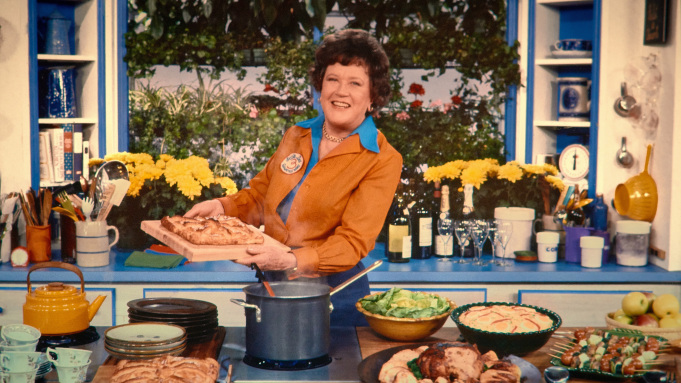 Julie Cohen and Betsy West’s latest documentary Julia takes an endearing look into the life of culinary icon Julia Child. Directed and produced by Cohen and West, the duo behind the Emmy-winning documentary RBG, it’s a story about a woman who found herself in the ever-romanticized City of Lights and came back to America to share the beauty of French cooking.

Julia Child was born into a wealthy conservative family in Pasadena, California. Child said she lived a “leisurely, butterfly life” while attending college. She was pressured by her family (and society) to get married, but she craved adventure and a life outside of her stuffy upper-class upbringing. Child actually wanted to be a spy but became a clerk typist for the Office of Strategic Services (OSS). During World War II, she traveled overseas to Ceylon, where she met her future husband, cartographer Paul Child.

The film follows their almost fairy-tale love story, showing snippets of letters from Julia and Paul to friends and family as their romance blossomed. He introduced her to art and different cultures all over the world. In one letter, she said, “I am engulfed with pleasurable warmth and delight.” We get a sense of the couple’s joyous life together through intimate photos and stories from friends and family.

After they married, Paul was stationed in Paris. It’s here that Julia’s life began. She fell in love with French culture, particularly their food. She continued to distance herself from her Republican family and gravitated towards the more liberal, French way of life. She attended the prestigious Le Cordon Bleu, the oldest culinary school in Paris. It was a male-dominated profession, where chefs are artists using food as a form of self-expression.

In France, Julia met Simone “Simca” Beck and Louisette Bertholle. The three women collaborated for 12 years on a cookbook, Mastering the Art of French Cooking, which would go on to produce a second volume. The best-selling book taught Americans how to cook and eat French food at home, making it less intimidating. The press tour for the book release led to Child landing her own cooking show, The French Chef.

Julia includes a brief history of American food in the 1950s–1960s. It was all about convenience and not enough about taste. With Julia’s guidance, Americans slowly graduated from strange Jello salads and TV dinners to home-cooked meals and, for those confident enough to try her recipes, French cuisine. The film also briefly discusses her work with Planned Parenthood and AIDS activism, then makes a weird transition back to her love of food and how hungry she always was.

The cinematography will have you salivating; you can practically taste the food through the screen. Director of Photography Claudia Raschke (Mad Hot Ballroom) films close-ups of Child’s recipes being cooked, almost like reenactments. Child’s instructions play over the new footage, interspersed with archive footage from her cooking shows. This will make you hungry, to say the least.

The film uses an interesting mix of music — Jimi Hendrix, Yves Montand, Nat King Cole. It opens with Hendrix’s explosive “Fire,” which is oddly fitting. You’d think it was a documentary about a rock star, which she kind of is.

We get a taste of French culture and learn about the importance and beauty of food, its history, and the sense of community it brings. Whimsical French music plays over vintage photos and footage, with heavy accordion cues at every mention of France.

Julia Child was theatrical, imaginative, flirty, fun, and relatable, and she continues to be inspiring. She led a fascinating life that certainly warrants a documentary. Younger generations likely first heard of her from the 2009 film Julie and Julia, starring Meryl Streep and Amy Adams, though any mention of the film is noticeably absent from this documentary. The Saturday Night Live skit featuring Dan Aykroyd’s impression of Child gets a momentary spotlight, though. We’re told by her friends and family that she was a fan of it, another example of her upbeat attitude. An HBO miniseries, also titled Julia, is currently in production.

She brought cooking into pop culture and paved the way for cooking shows and cookbooks today. Without Julia Child, there would be no Rachael Ray or Emeril Lagasse. She taught us that it’s okay to fail and how to turn our mistakes into opportunities.

Julia is an overview of Child’s life, not a detailed documentation. It doesn’t do a deep dive into her background but instead chooses to focus more on her cultural impact. Like watching an episode of one of her cooking shows, you’ll be entertained, fascinated, and hungry — and maybe even inspired to get in the kitchen yourself.