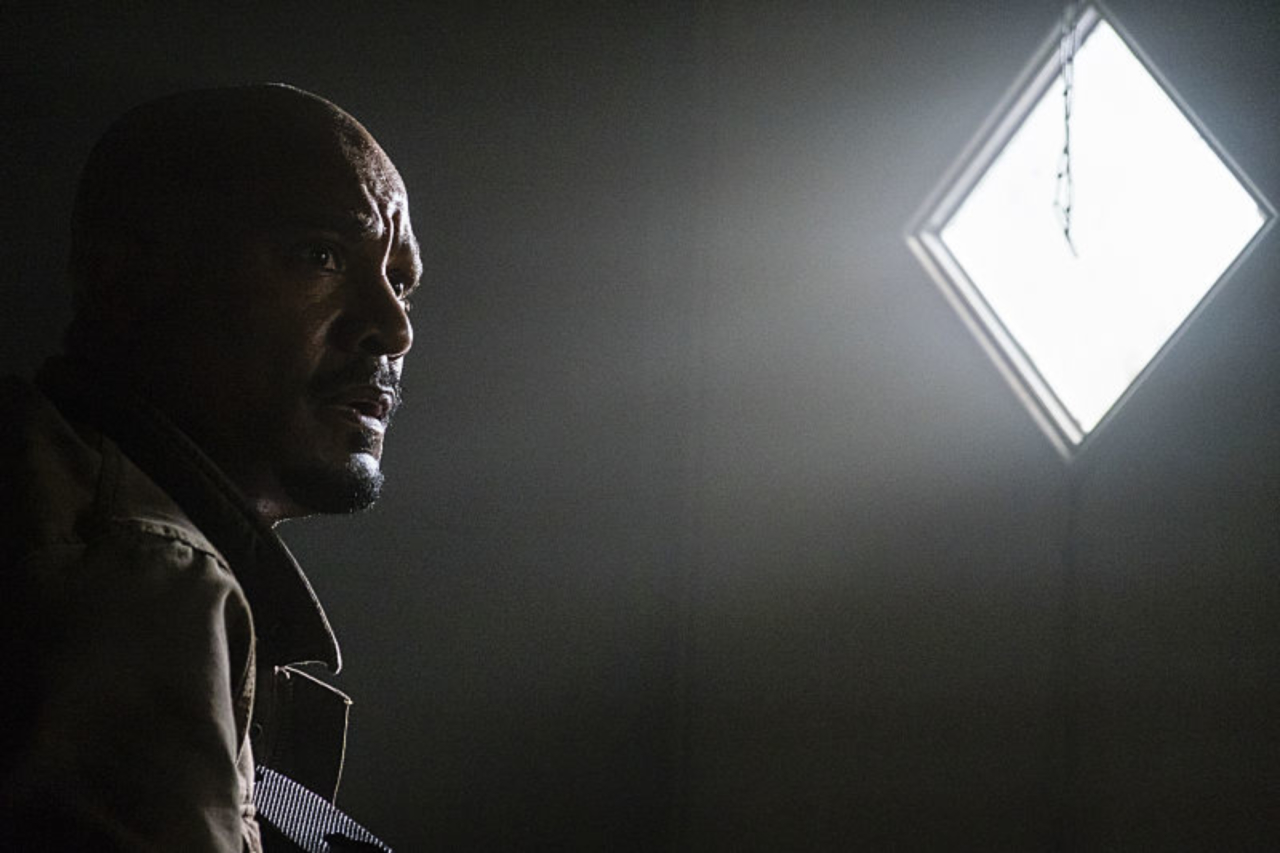 In the fifth episode of The Walking Dead, “The Big Scary U,” we learn a little more about Negan and Gabriel may have finally found his purpose in the apocalypse.

The episode opens with Father Gabriel praying at the chapel altar, and with an impassioned plea, he asks God for direction and purpose in his life. Though this scene was short, it gave insight into where his head and heart are. Gregory has realized that though death is inevitable in the apocalypse, it is what a person does while they’re alive that needs to count.

Simon wakes Gregory and serves him breakfast as a reward for the information he gave to the Saviors. Trying to appeal to Negan’s “sympathetic” side, Gregory says that just like Negan, he doesn’t like killing people but Negan immediately disabuses him of this extremely erroneous notion. Negan admits that he likes killing people, that for him it’s about “killing the right people at the right time;” by “killing one,” hundreds more can be saved. So let me get this right, are we supposed to believe that Negan is a murderous sociopath because he’s being altruistic, that he gleefully slaughters unarmed people for the good of society? That he threatens parents with the mutilation, maiming, and murder of their children because he’s a good guy? That they’re the Saviors because they “save people.” Oh really now?

When we last saw Gabriel it was in episode one of the season, “Mercy,” where after being duped by Gregory, he became trapped with Negan in a trailer surrounded by a horde of walkers. After staring at each other, Negan rushes Gabriel and takes his weapons. When Negan asks him why he saved Gregory after hearing his betrayal, Gabriel says that he “doesn’t want a fruitless death” and there must have been a reason he did it, that maybe he’s there to take Negan’s confession. Dare I say it, but I do believe Negan looked a bit shook at Gregory’s statement.

While Gabriel and Negan begin to talk about who they were before the apocalypse, Negan’s council of Neganites try to strategize on how to fix their current predicament. It becomes clear that without Negan his people can’t function. One of the men figures that someone there may have betrayed them, and in an effort to distract them, Dwight tells them they need to focus on getting rid of walkers — and it works.

Back in the trailer, Negan talks about his strength because he was able to take control of the Sanctuary and make its inhabitants strong, but when Gregory confronts him about the workers he treats as slaves and his wives, Negan said they made a choice. Now let me pause here, because I need to address this concept of “choice.”

From the time Negan’s wives were revealed on The Walking Dead, I’ve seen a disturbing trend where people try to defend Negan by saying they made a choice to be there, that he’s giving them food and protecting them, and to that I say BULL S**T. Anytime someone, woman or man, is being forced to have sex with another person IT IS CALLED RAPE. When a woman has to sleep with a man because she literally fears for her life IT IS RAPE. When a woman is forced to “marry” and have sex with a man because he threatens her real husband’s life, IT IS RAPE. Negan is a rapist, no ifs, ands, or fricking buts about it, and if people can’t see that, they need to access their life. Now that I’ve made that clear let’s move on.

Gabriel agrees to work with Negan to get out of the trailer, but only if he confesses, as a show of good faith Gabriel tells him about the people he locked in the church. Negan tells him about his sick wife and his inability to put her down when she died.  I guess this was supposed to make people feel sympathy for this particular devil, but guess what, I don’t.

Eventually, they make it inside to find the workers and council members facing off against each other. It’s been barely a day (yes I said A day) and already Negan’s people begin to turn on each other. I wasn’t surprised by this one bit. When people are forced to work under a man like Negan it’s because they have to, not want to, if the ship has a bad captain the crew will eventually mutiny.

*DEEPEST OF SIGHS* I have never in my life been more exasperated at the idea of writing a review, and I reviewed Transformers: The Last Knight. The idea of writing about an episode centered around Negan felt more like a chore, than a chance to chat about one of my favorite shows. In a season that feels like it’s moving at the pace of molasses flowing across a tabletop, “The Big Scary U” did nothing to improve The Walking Dead.

I am beyond done with hearing his stupid, asinine, juvenile comments about dicks, dick width, girth and every other adjective he can think up. I am tired of watching him brandish that damb bat, he might as well unzip his pants and pull his junk out. I am fed up with the numerous sexual innuendos that occur in almost every paragraph of dialogue when Negan is present. I am over his smug smirk, his constant leaning and irksome monologues.

I had it with Negan from the moment his murdered Glenn and Abraham. At this point I don’t care if he dies from a paper cut, lockjaw, walking pneumonia, a bullet from Maggie’s gun of a chop from Michonne’s Katana, I just want Negan dead and gone for good.

The Walking Dead airs every Sunday on AMC at 9/8c. Here’s a sneak peak for next week’s episode “The King, The Widow and Rick“.