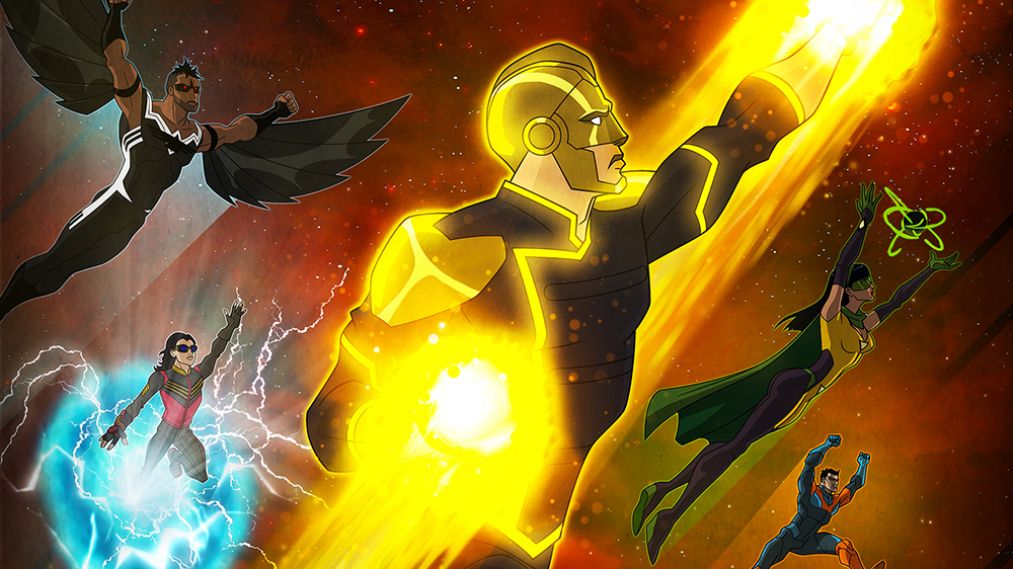 While the struggle for progress and diversity continues in the media, 2018 has been a year of some groundbreaking LGBTQ+ artistry.

The critically acclaimed Love, Simon was a hit at the box office. Janelle Monae’s Dirty Computer: Emotion Picture was a tour de force and a celebration of music, afrofuturism, and Black queer excellence. FX’s Pose has provided a long overdue spotlight on both ballroom culture and trans women of color. Nicole Maines is making history on Supergirl as television’s first trans superhero. Another less talked about gem is Freedom Fighters: The Ray, released this year on digital, DVD, and Blu-ray.

Freedom Fighters: The Ray is an animated superhero film about Ray Terrill, who discovers himself as a superhero from a parallel Earth called Earth-X. The new superhero is on a mission to fulfill his destiny as the Earth-X Freedom Fighter, the Ray, all while coming out of the closet. Notably, the Ray is television’s first gay superhero lead. 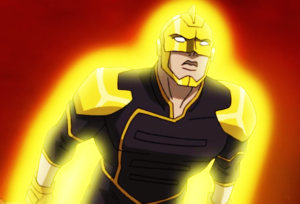 The Ray has been the moniker of four superheroes in the DC Comics universe. The original Ray, Langford Terrill, debuted in 1941. The current iteration of the Ray, created by Jack C. Harris and Joe Quesada, was introduced in the eponymous comic in February 1992.

Much like last year’s Vixen: The Movie, Freedom Fighters combines the first two seasons of the hit animated series, which premiered on the CW Seed, as well as includes never-before-seen footage to make for an exciting feature length film. Just like Vixen, Freedom Fighters takes place in the Arrowverse and serves as a prequel to the events that transpired in the Crisis on Earth-X crossover. Russell Tovey reprises his role in the prequel and certainly delivers an earnest performance that gives the movie much of its heart and depth.

What’s interesting is that a few years back, I explained why both Vixen and the Ray were long overdue for a mainstream push. Both characters have illustrated this in both the animated films and their live action appearances. It’s nice to see that the shot callers at the CW took note. You’re welcome.

While on the surface Freedom Fighters might appear to simply be a cartoon superhero flick, in reality it is far more nuanced and cerebral. Terrill is a hero long before he receives his powers. He’s dedicated his life to fighting injustice both professionally and personally, be it housing discrimination, misogyny, racism, homophobia, etc. To see a white man, even a gay one, make battling injustice a priority outside of the white savior trope is almost unprecedented. Although the media has no shortage of white male protagonists in superhero narratives, few of them are sympathetic, much less role models. Even fewer are gay. Terrill is a protagonist who genuinely wants to do good for the right reasons. Most of said motivation stems from a desire to honor the memory of his deceased brother, Michael, who was killed while serving in the armed forces overseas. 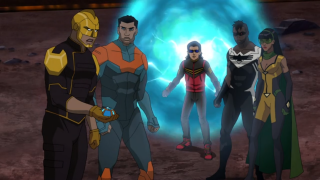 The themes of the military and social justice activism being juxtaposed in the comparison of Ray and his brother raises an interesting quandary regarding the definitions of patriotism and freedom fighters. It goes without saying that the men and women of the armed forces dedicate their lives to protecting the liberties and ideals of the USA. The same is also true for equal rights activists. Many of whom, like countless soldiers, have paid the ultimate price for women’s rights, racial justice, LGBTQ equality, and other freedoms for all Americans. The film does a respectful job and pays a nod to both kinds of heroes. The movie is also unflinching in tackling the issues of male identity. No matter if you’re athletic, a soldier, or even a Nazi-fighting superhero, your masculinity is under constant inquisition if you’re suspected of being anything other than a straight, cisgender male. Thankfully the film manages to provide a discussion without falling into the usual trappings of toxic masculinity that one finds in too many narratives.

With Freedom Fighters being a prequel to the events that take place prior to the Crisis on Earth-X crossover, there’s a glaring continuity error. Fortunately fans can write off the events in the film taking place prior to the Flash altering the timeline in Flashpoint.  When all else fails, just blame Barry. (Not that Barry — Barry Allen.)

All the same, Freedom Fighters is an amazing gem and a most important one. LGBTQs need to see that it doesn’t get better, it gets real, and that’s okay. Non-straight males need to see that like our cis heterosexual brothers, we are diverse, even super-powered action heroes. We are capable of being the leads in our own epic adventures. Just as important is that cis heterosexuals witness non-straight male superheroes being the leads in their own epic adventures.

This film is definitely an A-lister and is shining a ray of light on how artistry, diversity, superhero narratives, and social commentary are properly blended and executed. Hopefully, Freedom Fighters is lighting the way for other exemplary narratives to follow.