Let’s cut to the chase: Girls Trip is the summer party movie you’ve been waiting for.  It flat out delivers all the fun, all the heart, and all of the wild alcohol-infused revelries that you’d hope for in a movie about four girlfriends who have been apart for too long to get together for a fun weekend of dancing, drinking and reminiscing.

The plot is simple: Ryan Pierce (Regina Hall) decides to gather her best friends, Sasha (Queen Latifah), Lisa (Jada Pinkett Smith), and Dina (Tiffany Haddish) for a party weekend in New Orleans during Essence Fest where she’s the Keynote speaker.  It’s been five years since they were all together on a trip they used to take yearly since they graduated from college.  Of course, they all come with their own baggage:  Lisa is now a single mom after her marriage fell apart, Dina has work/boss issues, Sasha’s finances are on the rocks, and even Ryan’s seemingly perfect life is not all it seems.  Still, the ladies, known in school as “The Flossy Posse”, are just glad to be together.

One of the reasons this film works so well is that there is an amazing chemistry between the actors.  They obviously had a lot of fun making this movie because the feeling of togetherness is palpable.  They look like they are having a ball with each other and that itself is a significant element that contributes to the film’s appeal.  Also, New Orleans is the perfect backdrop.  The city just dares you not to have a good time.  Also, there is a weird innocence to the otherwise decadent atmosphere that you don’t find anywhere else, and for some reason, some of the raunchier actions in the film that might normally come off as sleazy if the setting was say, Las Vegas, just comes off as fun in the Big Easy.

Where Rough Night apparently failed, Girls Trip succeeds, perfectly capturing what it feels like when women who genuinely love each other let their hair down together and just have a good time whether it is at their first slumber party or their bachelorette party.  Of course, not everything is peachy among the characters.  There are secrets, misunderstandings and long-held resentments that bubble to the surface.  But, the film is consistent in only allowing things to go so far between these women who have a strong bond. Nothing is said or done that can’t be forgiven. 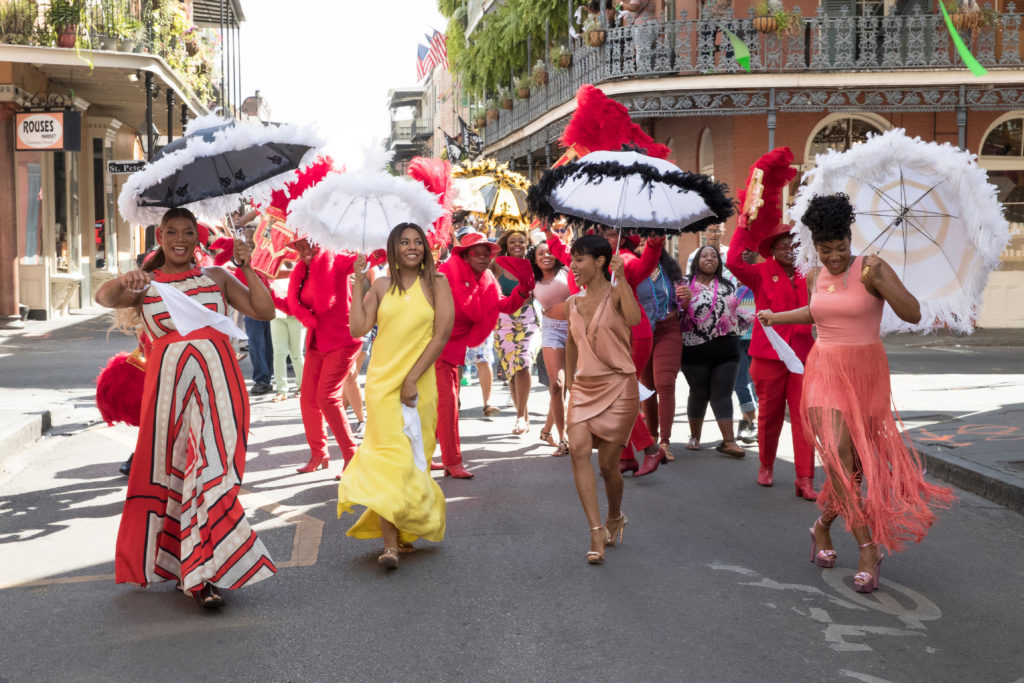 The film places the women in situations that are pretty wild, but ultimately harmless, and (spoiler) no one dies, which is a plus in my opinion.  Instead, the situations that arise are those that you’d naturally expect when with a group of women that get together to drink and party, and director Malcolm D. Lee doesn’t shy away from the outrageous, and the cast pulls it off beautifully.  And, in case you think you saw the most outrageous moment in the trailer (yes, I’m talking about Jada’s now infamous zip line incident), have no fear.  There are many more moments in the film just like that one, some worthy of Lucy and Ethel…if Lucy and Ethel starred in an R-rated comedy.

Another plus is that the overabundance of gross-out moments that always pop up in similar films are noticeably absent in this film.  But the moments of hilarity are plentiful and all of the ladies get their turn.  Some moments are better than others, of course.  Pinkett Smith’s zipline bit may have been her comedic highlight, and Hall’s cooking demo (hint: it involves sausages) fell a little flat, but Latifah’s nightclub make-out scene was arguably the best moment of the absinthe sequence.  But that’s not the funniest bit in the film. Which brings me to Tiffany Haddish.

All the performances are respectable, but the prize for pure comic genius goes to Tiffany Haddish.  Though most reviewers will refer to Haddish as a newcomer, she is anything but.  Haddish has been toiling in the industry for over fourteen years as a standup comedian, while making various appearances in television and film, including as a regular on The Carmichael Show and a co-starring role in the hilarious Key and Peele film, Keanu.  She was also a guest on the Black Girl Nerds podcast.  Yet many people don’t know her name or her work.  That is about to change.  “Girls Trip” was the perfect setting to allow this diamond to shine.  Her comedic skills easily match Robin Williams’ on his best day and she simply walks away with every scene she’s in.  But that isn’t all.  In one memorable, poignant moment, her performance nearly brought me to tears, showing off her dramatic chops.  When I was leaving the theater and the press screening in New Orleans last week, her name was on everyone’s lips.  My prediction?  Awards will accompany the accolades coming her way, and every one of them will be well deserved.

Refreshingly, the comedic bits are left squarely in the hands of the ladies, and the men are placed firmly in the background, stepping out primarily to provide eye candy for those of us who admire male beauty.  Not to say there aren’t fine performances from the gentlemen.  Larenz Tate, the seemingly ageless Love Jones and Best Man franchise alum, is sexy and sweet as the Flossy Posse’s college buddy and Ryan’s old college flame, Jullian.  Mike Colter (The Good Wife, Luke Cage) is great as Ryan’s husband and business partner, Stewart, who is more business than a partner. The role could easily have been a throwaway, but Colter actually manages to give the character real dimension.  Then there is Kofi Siriboe (Queen Sugar) as Malik, who is basically the film’s beefcake. I would have felt guilty objectifying him, but he knows why he’s there and seems to be having a great time.  He utters one very memorable line, “That’s not my arm.” So, yeah, feel free to ogle and replace Pinkett Smith’s character Lisa, with yourself.  Nobody’s going to judge you.

At a time when Hollywood is debating the need for more women as directors and producers, it might seem a questionable choice for director Malcolm D. Lee and producer Will Packer to choose a project about and, arguably, for women.  In my interview with the two last week, they both explained that they didn’t feel any different working with four strong female actors than they would working with four strong male actors and that the importance was to tell a good story.  But both admitted that these actors would certainly know more about being women together than they would.  So, they knew when to get out of the way and let the women work.  So, maybe the studios need to take a clue from them: and let the women work.  The results speak for themselves.

Of course, the film isn’t perfect.  There are some predictable, slightly cliché moments and a couple of the supporting female roles could have used more attention to character, as they came off a tad one-dimensional.  But the tiny hiccups are barely noticeable as you are too busy laughing.  If you are looking for something deep and meaningful, keep looking.  The upshot is that Girls Trip is a romp and the film succeeds, hands down, as an excellent fun-filled escapist comedy and great summer fun.

As a side note, if there was ever a movie that is crying out for a female screening, this is one. The audience I saw it with was mostly women and it was a party.  The guys I talked to afterwards loved it as well, but the women were screaming.  Do yourself a favor and grab a girlfriend, or a few, and head to the theater together when it opens on July 21st.  But skip the drinks until afterwards.  You won’t want to miss a single moment.