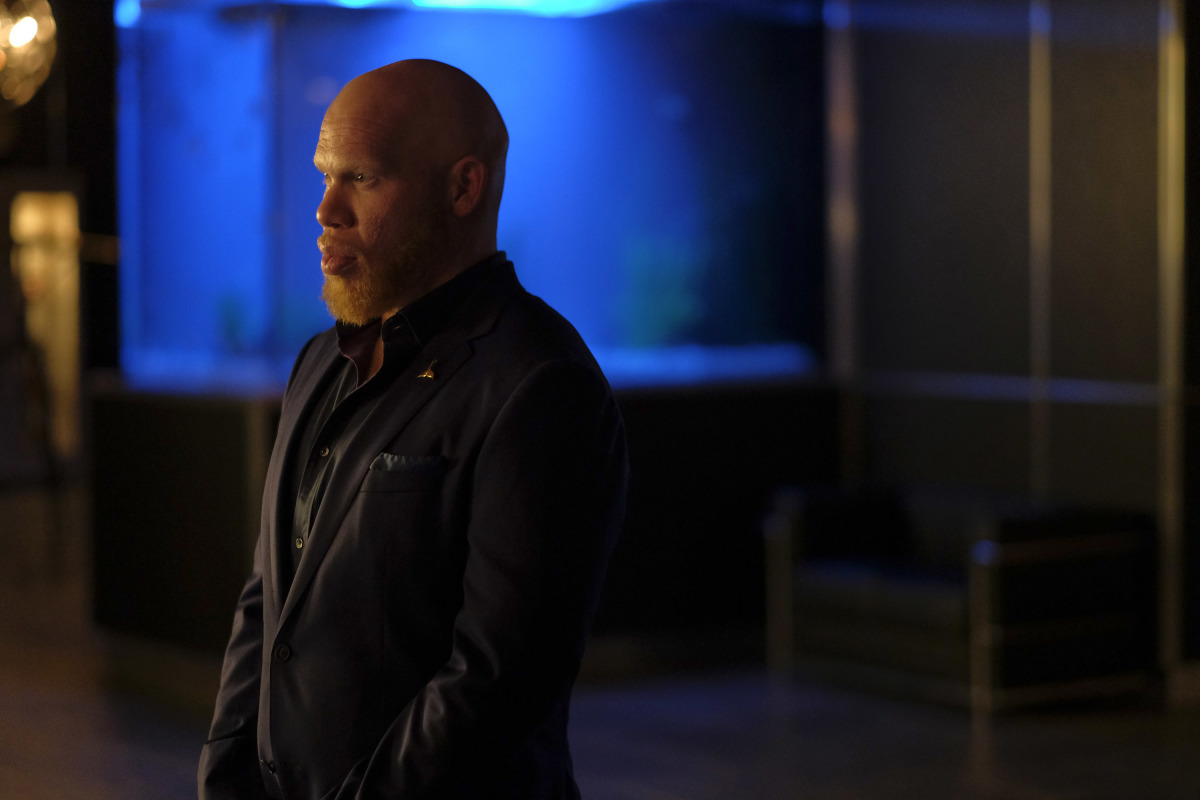 So, Black Lightning has been killing it every week since its premiere. While I love the incredible Pierce family, there is another person who you should pay very close attention to. As one of the few media outlets on set for a visit, Black Girl Nerds was granted an exclusive sit down with the villain you’re definitely taking notice of, Tobias Whale, portrayed by Marvin “Krondon” Jones III.

As we chatted, Marvin managed to do what’s never happened to me in an interview, bring me to the brink of tears, as he shared more about his journey, the complexities of this character, and how everything in his career has led to this beautifully orchestrated moment and role.

Kay-B: Hi, I am Kay-B with Black Girl Nerds, it’s a pleasure to meet you!

Marvin “Krondon” Jones III: Hi, it’s a pleasure to meet you as well!

Kay-B: So, tell me about the similarities between Tobias Whale and Jefferson Pierce. A lot of people think that just because they are enemies and are on opposite sides of “the law” that they don’t have a lot in common or a lot of similarities.

Marvin: I think that the similarities between Tobias Whale and Jefferson Pierce are: the need to be loved and the need to be accepted. I think Jefferson wants to be accepted as Black Lightning by his wife, his family, and his kids. He also wants to be accepted by Inspector Anderson and the people in the community. I think he wants to be loved and he wants to be accepted as a hero and as the saving grace. Then you have Tobias Whale, who wants to be loved and respected in the community. He might be a little more self-serving and he might have a lot of manipulation to his reasoning. Ultimately, it’s of lack of love and it’s a lack of acceptance that’s happening in Tobias’s life and that he’s acting in ways and behaving in ways and setting up a world that’s going to give him that love, by any means necessary. The last similarity is tenacity. They both share the willingness to never give up, whether it be on both sides of the law or opposite sides of the law. They’re not going to give up.

Kay-B: You talk about first, the need for love. There’s this scene with Tobias and Lala before Tobias kills Lala, he admonishes him for killing LaWanda. He basically tells him, you killed someone’s mother, so now I have to kill you. You see similar behavior with Lala and the young man in episode 1. He wants him to be respectful but he also needs to get on that corner and move those drugs. So it is almost like Tobias taught Lala everything he knows. A lot of that is rooted in wanting to be loved and respected. That scene with Lala and the little boy is almost the same scene with Tobias and Lala, it just happens a little later.

Kay-B: Tobias is a politician, so will we see more of his non-corrupt political side as the season progresses?

Marvin: I hope so— well, I do know. You have to keep watching, but I think we will. There’s a duality in Tobias Whale, and we don’t see it early on, but it will reveal itself. It goes back to his need to be respected and therefore he is going to have to do something respectable.

Kay-B: Which is why I don’t think Tobias is inherently good or bad. I think he straddles the line a little bit. Obviously, he’s the leader of The 100, but they also do a lot of good for the community. They are respectful to a degree, but they are also running a large drug ring.

Marvin: If you think about it, this is something that the show does throughout. Not just with Tobias Whale, but the show highlights that we all have these qualities. So whether it be manipulation, anger, jealousy, the need to feel love or be accepted. Whether you are a dope dealer, teacher, student or drug addict, these are all human qualities that we share. The show is an example of that. It is one of the endearing things that attracted me to it. I am the villain but I relate to Jefferson Pierce as a father, as a man, and as someone who is not going to give up on what he believes in. And I am sure that he relates to me in the same way. The human qualities of life I think are something that when we are thinking about individuals and not judging them, we have to take that into consideration.

Kay-B: So music plays a huge role in your life and in the show as well. I heard Salim Akil (Executive Producer and Co-creator) say a lot of the show’s music is from his personal collection. So what do you think Tobias Whale’s theme song would be?

Marvin: Oh that’s easy, it is “Sometimes I feel like a Motherless Child,” and it’s been done by so many people. I am hoping we will be able to use it at some point in the show. That song describes Tobias Whale more than anything.

Kay-B: Perhaps it’s his lack of having a mother figure that spurs him into this need for love and acceptance, and sends him down this particular life path.

Kay-B: So tell me about the level of creative control you have in your portrayal of Tobias Whale and while working with Salim and Mara.

Marvin: Salim Akil and Mara Brock Akil are a dream come true for me to work with. Salim has been like a big brother, father figure, and mentor to me on this show and to me as an actor. He has given me a life-changing role and opportunity. He has also given me complete creative control with what I want to do with Tobias to make him real, real to me, and to the viewers. That is something that I cannot say enough about. It is just something I have a very sincere and seriousness about when I speak about it if you can’t feel it.

Kay-B: That’s really refreshing to hear. I have heard so many incredible things about them and they seem like the type of dynamic showrunners you would want when stepping into a role and show like this.

Marvin: They are unbelievable. It is the part that I know that God is in the details of all things, because of the people that he’s put me under. It’s unexplainable, it really is. How uncanny, how perfect, how marvelous, and enlightening. It’s overwhelming.

Kay-B: I can see the gratitude all of you.

Marvin: I was in the trailer today getting ready and Salim trips off of me because I am still in awe of him. I am smiling because God created a human being like him, and his wife, and put them together!

Marvin: It is, it really is! And they are changing lives left and right and it’s just amazing.

Kay-B: So so amazing. Well, thank you so much!

Marvin: No, thank you. You have been so so awesome.

Black Lightning airs Tuesdays at 9 p.m. on The CW.