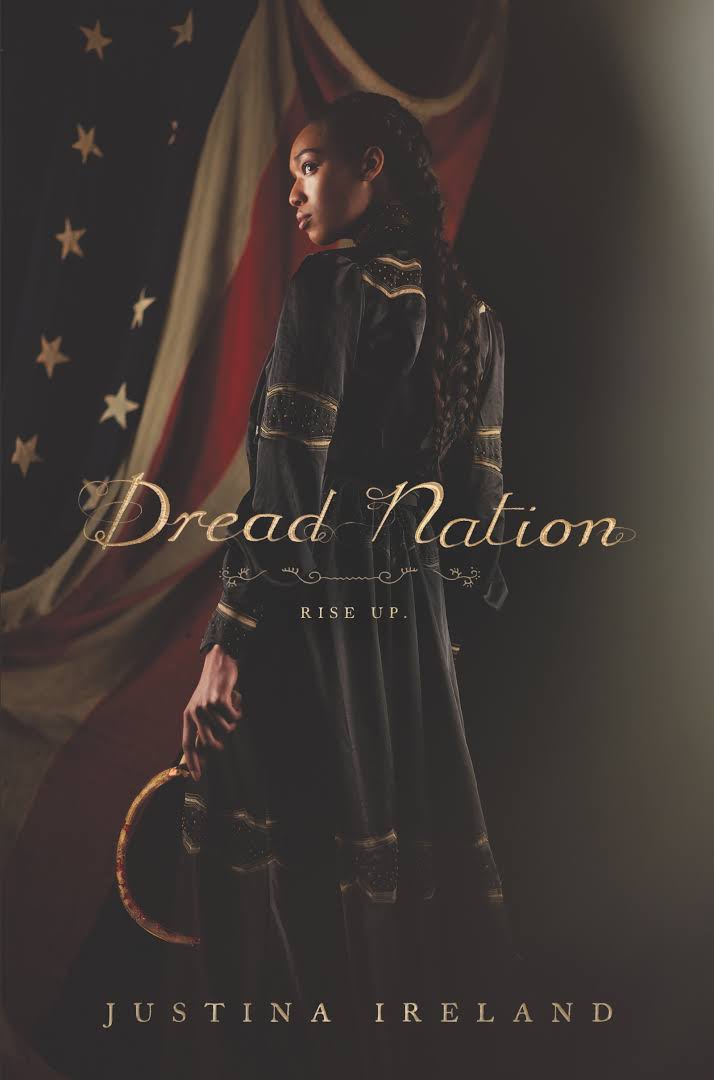 Rather than opening this review with a bit of fluff, I’m just going to cut straight to the chase: Justina Ireland’s Dread Nation should be added to your TBR list immediately. I don’t quite know what my expectations were going in, but I read the summary and got strong Abraham Lincoln Vampire Hunter and Pride and Prejudice and Zombie vibes (the latter of which Ireland does reference in her author’s note as partial inspiration). A fan of Vampire Hunter (the book) I was pretty curious to see how Ireland would bring black women into the story and to the forefront.

And in the year of 2018, where black women are still trying to protect this country from itself, Dread Nation embodies how we have sacrificed ourselves (whether it is emotionally, mentally, or physically) for others. But, you know, now with zombies (or as the book refers to them, ‘shamblers’).

Our main protagonist and heroine is Jane McKeene, a 17-year-old shambler-killer-in-training at Miss Preston’s School of Combat in Baltimore. Schools like Miss Preston’s were created after the dead began to rise in the midst of the Civil War. Thanks to the Native and Negro Reeducation Act, Native American and black children are forced to enlist in schools where they are taught how to kill the dead. For those who succeed, they could live a better life as personal guards to wealthy, white people. But Jane is only focused on graduating so she can return to her home and family in Kentucky. But when she agrees to help a friend, she finds herself in the middle of a mystery surrounding the disappearance of elite, white families in the Baltimore-area. And the truth could not only get her killed, but changes everything the characters thought they knew about the war against the undead.

Similar to The Walking Dead, Dread Nation is a book that is, at its core, about the people and not the shamblers/undead. Ireland is unflinching in her portrayal of an America that, even in the midst of the ultimate fight for its survival, uses the bodies and lives of people of color to maintain white sanctity and security. But there’s a depth to the story that properly reflects the time period and characters without feeling forced on or convoluted: issues of colorism and sexism also play an important role in the growth and development of our characters. But Ireland’s balance between these very real issues, and the mystery and action that you expect and want from a “zombie” novel, along with the pacing, left me breathless and itching for the inevitable sequel that already looks like it will up the ante even more.

As previously mentioned, our main character is Jane McKeene. She’s smart, unapologetic, and good with sickles when she has to kill shamblers. Because the book unfolds from her perspective, there’s an air of mystery surrounding her due to her closed-off nature. Growing up in proximity to a volatile slave master, dealing with shamblers, and having her heart broken by an equally mysterious character named Jackson “Red Jack” means Jane does not open up easily. Jane is a very complex character, one whose actions and motivations can often blur a line between right and wrong. She can be compassionate and ruthless, and these traits make her an engaging character to follow. While her growth is not as obvious over the course of the book, the revelations about her character are almost a better substitute. I can’t wait to see what Ireland has in store for our protagonist in the next book.

Opposite Jane is another female character, Katherine. She could be considered Jane’s foil in almost every sense: light-skinned that she could pass for white (which comes in to play about halfway through the book), a suck-up, and a bit of a “girly-girl.” Katherine is, at first, the character we are meant to despise because of these shallow traits as described by Jane. However, Katherine is just as smart, capable, and headstrong as our lead. And I was surprised and delighted by the inevitable friendship that unfolds between these two. The very characteristics that make Jane and Katherine different wind up complementing the other. And I’m so, so glad that Ireland made these two companions instead of rivals. It was honestly one of my favorite aspects of the novel, especially considering how deeply colorism has affected the black community. And just as importantly, women looking out for other women has really become something I long for more of in popular culture and entertainment. Their friendship isn’t perfect — it’s new and rocky, as it should be — but it’s vital not only to their survival, but what I suspect will be even deeper dives into their characters in the next book.

It’s such a breath of fresh-air to see strong, female leads (and even some of the side-characters) written with such complexities and heart. They are imperfect and flawed, but in them I see the black women around me who continue to love, fight, and sacrifice for those they care about. Ireland’s characters, whether you are meant to love them or hate them or feel ambivalent about them, do a good job in driving the plot forward. While some of our villains do fall a bit more on the flatter side, it doesn’t detract from the main story and, more importantly, our main characters. To be honest, having white people be bad in the 1800s is no surprise, so Ireland could really only do so much. But her focus on the people and women of color pays off (and that’s what I was here for anyway).

But I would be remiss if I didn’t talk about zombies.

There’s no way you can forget this is a book about the dead rising once more. Although the book itself does not lend too much of anything new to the genre (they still eat people, they still have to take a head-shot to be put down) changing the setting from the present to the past means this world does not look like the apocalyptic wasteland we would often see in on-screen or in books today (or at least what I’ve seen in entertainment). Ireland writes how an America (who was in the midst of fighting over the existence of slavery when the dead began to walk) would handle such a crisis. Ireland captures a lot of the damaging ways in which POC and especially black bodies would bear the brunt of such devastation. No spoilers here, but there’s a pivotal moment early in the book involving an academic lecture that highlights this perfectly.

But the suspense and the ever-growing threat of the shamblers does not take away from the issues our characters face. Just like when I think of The Walking Dead, I was forced to reckon that the shamblers of Dread Nation were not the biggest threat to the livelihoods of our characters. It is how Ireland chooses to use the shamblers in the backdrop of a painful history that many to this day will not acknowledge that really makes this historical fiction novel stand out to me as a must-read. I would not call this a zombie book, so even those who are burned out by zombie-fever should find something to enjoy here, whether it’s the post-Civil War setting, the feminism, or the action.

I was not sure what to expect when I began this book and was pleasantly surprised by what I found. Here’s hoping Ireland builds on the world she has created in the sequel, fleshing out our leads even further, and upping the stakes even higher.

Lastly, I want to thank Ireland for sharing the history that inspired this book and making sure the crimes against Native American children are not forgotten.

Disclaimer: I received a free copy of Dread Nation from Balzer + Bray (an imprint of HarperCollins) in exchange for an honest review.

Ashley Spruill is a graduate of UNC-Chapel Hill and has spent her post-graduate career working in public relations. She recently moved from her hometown in North Carolina to the New York Metro Area where she currently lives off ramen and reading as many books as she can on the subway. Otherwise, she’s probably binge-watching something online. Connect with her on Twitter: @ampsruill

Review: ‘I’m Not Dying with You Tonight’ Lacks Nuance