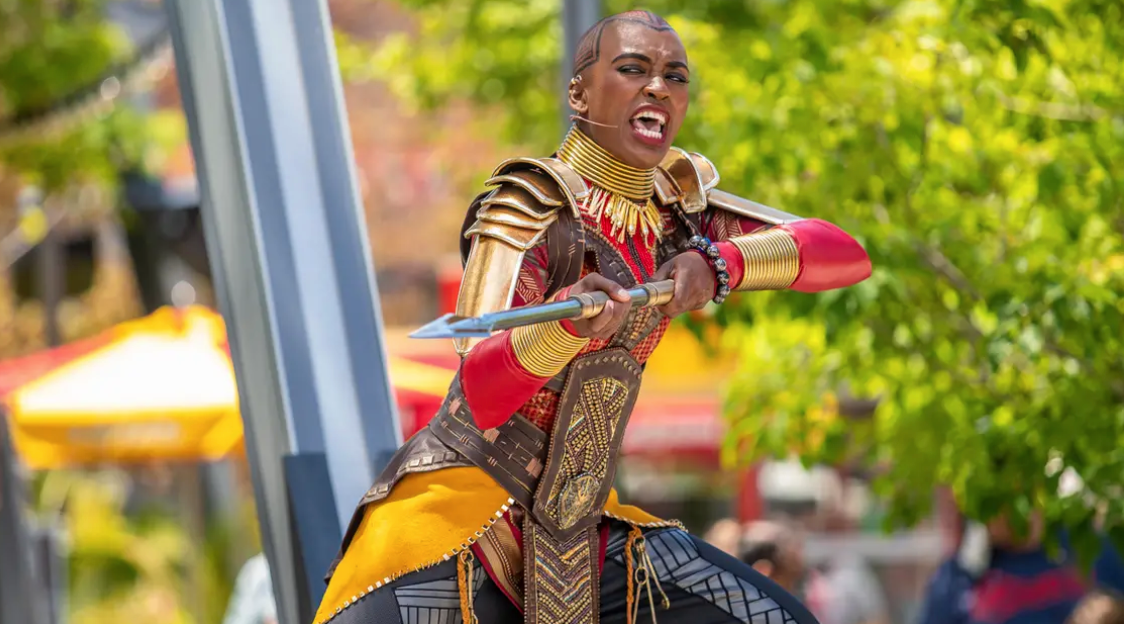 When I think about the Dora Milaje, I can’t help but feel pride and joy. Who cares if they are fictional characters. I still aspire to be that smooth, graceful, confident, and badass. Having had such fanciful wishes, it was a dream come true when guests got the opportunity to train with the ancient female warriors who protect the kingdom of Wakanda.

Disney California Adventure has a new interactive show called Warriors of Wakanda: The Disciplines of the Dora Milaje at their new Avengers Campus. Oh, what fun it is to practice chants and cool moves with a group that exemplifies the beauty and strength of the Black woman. We don’t see enough of it. When we do, there’s always the question of why there aren’t more. Why isn’t it the norm? Black Disney execs are working behind the scenes to give us more.

As Disney incorporates its latest initiative, Celebrate Soulfully, you can find lots of new, rich experiences that honor Black heritage, culture, and excellence. While certain festivities will last from now to July 4, there are also year-long experiences such as training with the Dore Milaje and posing with Black Panther. There is also a cool stunt show featuring the Avengers and villains.

Disney California Adventure is celebrating a milestone anniversary. 2022 marks the 10th anniversary of the park’s major expansion in 2012 when guests took a stroll down Buena Vista Street and cruised down Route 66. Cars Land was just the beginning. Disney California Adventure opened Avengers Campus in 2021. It features experiences such as WEB Slingers: A Spider-Man Adventure, Doctor Strange: Mysteries of the Mystic Arts, and photo opportunities with your favorite Avenger (*cough cough, Black Panther).

Wakanda, a fictional technologically advanced society, acknowledges its deep history and culture. There is pride in tradition, honor, courage, strength, and loyalty. These qualities are symbolized and exemplified in Wakanda’s leader the Black Panther and his protectors, the Dora Milaje. The Warriors of Wakanda: The Disciplines of the Dora Milaje isn’t long, but it is a sight to behold. The performers exit out of the Avengers Compound and make their way toward the stage, chanting and stepping in rhythm with their vibranium spears. They keep in character the entire time. Along with chants and moves, at this moment, the Dora Milaje also share a bit of wisdom. During the show, the Dora Milaje talked about embracing each other and tolerance. It was a teaching moment regardless of age, race, or gender. There was also a moment of silence for those who have moved on from this world. It was touching, to say the least. It is a beautiful show that displays consciousness and purposefulness in Disney’s products.

The costumes are on point. I expect nothing less from Disney. But I was also impressed with the women they chose to represent the Dora Milaje. There were Black women of all sizes. Yes, there is a plus-size Dora Milaje warrior, and I couldn’t be happier. I got goosebumps watching them do their thing. It was touching to see the impact these women have on little kids. During the show, they call up volunteers and ask questions about strength and personal reflection. They called on this young Black child who was wearing a Black Panther shirt. The timidness and shyness that was there quickly went away as, together, they led the audience in a chant and movement. The smile and adoration from this little kid were priceless. We all walked away inspired, standing a little taller and prouder.

There aren’t many Black, let alone Black female, offerings at Disneyland. Current offerings include photo opportunities with Princess Tiana and the Dora Milaje experience. Being able to see these characters up close and personal at the Disneyland Resort was very special. This summer you will be able to see Black Panther and Frozone in Disney California Adventure and Joe Gardner from Disney and Pixar’s animated filmSoul in a special exhibit in Downtown Disney. Disney Parks announced last summer that the classic theme park attraction Splash Mountain would be updated and rethemed to the 2009 Disney Princess animated movie, The Princess and the Frog. In the words of Lizzo, “It’s about damn time.”

BGN is excited for everyone to see the new and diverse offerings from “the happiest place on Earth.” From the shows to the characters to the food, it’s been a blast getting insight into the movement behind the scenes to make us all feel welcomed. What was originally introduced during Black History Month has found a home outside of February for now. We hope that more offerings like this come out of Celebrate Soulfully. If you need more of the Dora Milaje than Disneyland has to offer, a rewatch of the Marvel films and a healthy read of numerous Marvel graphic novels featuring the group should do the trick. For more information about the Dora Milaje and other Disney experiences, visit the Disney website.