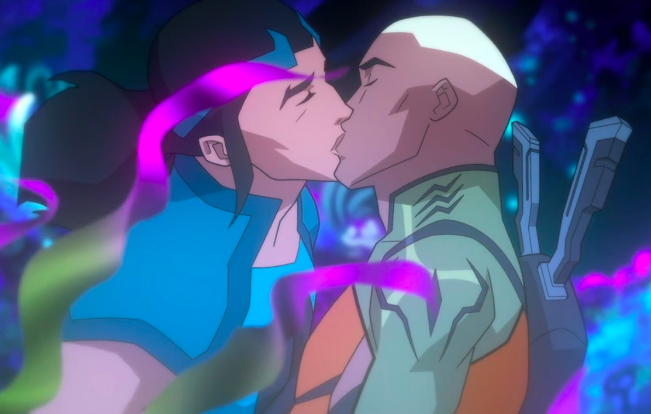 It’s the end of 2020 headed to 2021, so why do we still not have an animated gay Latino male superhero being the lead of his own show?

The importance of gay characters being represented in animated shows is becoming an ever more important issue for society. So much so that a reboot of a childhood cartoon has been revived and queered for this generation’s audiences, She-Ra and the Princesses of Power. Because of political and social changes, there has been a greater number of LGBT+ folks being presented on family animated superhero shows. This representation for the queer community has largely focused on lesbian and bisexual representation. However, has this tremendous triumph for the queer community come at the expense of gay male Latino/Hispanic superhero animated leads?

In order to unpack these questions, a clearer understanding of what is already available must be examined.

There are already great POC superheroes, and comics have done a great job of creating them, but these superheroes have yet to make it to the small screen for families to enjoy. Characters like Marvel’s Brazilian Sunspot, the new Brazilian Wonder Girl, or even Blue Marvel, who are all amazing characters, have yet to make it on the little screen. But even these characters do not quite hit the mark. While they are showing representation, gay Latino boys are still not allowed to see their own identities

Why does gay representation matter so much? As many studies have shown, unlike other ethnic or racial identity groups, most queer individuals (myself included) do not get raised by a community that is similar to them. They are not given the option to learn about their identity through more direct interactions that help to strengthen and advise them as other culture groups are. Instead the queer kids and teens are often raised in communities that are oblivious to their needs or are even unfriendly towards them. Because numerous queer individuals understand their identity through a process, a process that is largely unsupported by many communities, countless individuals turn to pop culture for a clearer understanding of what they could be.

This idea of representation, especially for the queer community, has been proven to have a positive impact as to how LGBT+ individuals perceive themselves, and how others perceive them. By creating, popularizing, and maintaining gay characters, many problems that persist can start to be assuaged. Changing current harmful attitudes into more positive ones, queer people can start to feel better about themselves, more comfortable with their identity, and about others knowing about them without a sense of fear or shame. A hero like this might be able to save the gay culture I love! So, knowing that gays look towards media for representation, why don’t we have a gay male Latino/Hispanic animated superhero lead?

Superhero LGBT+ Characters That Have Representation

One animation that has received massive support is Noelle Stevenson’s reboot of the much-beloved children’s animated series She-Ra and the Princesses of Power, and rightfully so. With her entry into the pop culture scene, she ushered in a new age of inclusion and acceptance for a marginalized community. Her work has sparked a large fandom, cosplayers, videos, and memes. There is much love for her white female character. All of this would not be possible without her inspired lesbian character, She-Ra/Adora. Of course, she is not the only one who has created LGBT+ content for kids and adults to enjoy — just the most prominent. She-Ra and the Princesses of Power elevated the Pride community to new heights with its lesbian titular character.

But She-Ra and its contemporaries’ well-earned success raises a question. What about the Latino gay boys? Shows and movies seldomly, if ever, give gay male POC characters the title roles in children’s animated cartoons the same opportunity and respect for inclusion and diversity that would allow them to serve as role models for young audiences. While it has become more common to see a lesbian or bisexual superhero, it is not as common to see a gay male character given the same amount of representation on screen. It is still rare to find a gay superhero character go off and discover what his identity or his story means for his own sake or the audience that wants so deeply to see it.

What would a gay superhero lead mean for children and adults? Acceptance, empathy, and understanding are at the heart of these series. It would allow viewers to see heroism through a different lens outside of a hetero white male. Giving POC gay boys a chance to see that they can also experience heroism would undoubtedly allow them to feel more acceptance.

There is a need to present and display more representation on TV shows and films than ever before. At the forefront of this is Netflix with the help of DreamWorks, who have created programs like Kipo and the Age of Wonderbeasts and Voltron that both include gay characters like Benson and Shiro respectively. Even in Disney’s The Owl House, the lead is a bisexual Dominican girl, Luz Noceda. The Legend of Korra has a bisexual female lead. Steven Universe has lesbian main characters. These works have been monumental in how little boys and girls see themselves represented on the small screen. They, however, while well-meaning, have not allowed for a gay male character to explore his own storyline as the principal character.

Voltron in the last few seasons revealed that Shiro, the pilot of the Black Lion, was in fact gay the whole time. This was a major victory for the LGBT+ community — despite some dissent amongst fans. However, it does repeat a certain design that is telling about how many kids’ cartoons treat their gay male characters. Most often a gay character is relegated to the role of a father figure or a sidekick, never the lead. In She-Ra, both of Bow’s dads are gay. In the Kipo series, Benson is a sidekick.  In The Dragon Prince, Rayla’s adopted parents mentor her fighting abilities. All of these shows perpetuate this idea that gay male characters cannot be standalone titular characters.

An example that breaks standards but does not revolutionize the understanding of gay superheroes is Aqualad. In the most recent season of DC’s Young Justice, Aqualad revealed that King Orion of the Underwater Court was his boyfriend. While many fans were pleased to have more representation of a gay (or perhaps bisexual, in Aqualad’s case) person of color, Aqualad is still Aquaman’s sidekick and a member of the Team. Aqualad is a bisexual Black male character who expresses masculine traits. He is also one of the few queer heroes in children’s animation. Even given all this, he is still not the principal character of the show. While this is a major plus for the gay community, it still does not close the gap on one very specific issue. Why is there still no titular animated gay Latino male superhero for kids?

It is a magnificent spectacle to witness so many characters who identify as bisexual or lesbian, but it is still necessary that we have gay characters who are gay in their own right and not simply sexually fluid or bi for possible fear of backlash. That’s not to say there are no shows featuring gay superheroes, but they’re often confined to more adult audiences. Take for instance the 2018 animated series Super Drags. While it was an attempt to make gay males the main protagonist, it reinforced negative stereotypes.

Despite the fact that gay males are visible in society, they rarely get their own stories told. When gay stories are told, they are usually oversexualized, put in terms of drag, or even put on as comic relief. Gay men have little agency or choice in how, or even if, their story is told. Gay men are often popularized in media — the GBF, the beloved background character, the father figure — but they still have yet to be deemed acceptable for children’s superhero TV shows. In 2020, gay men are still barely visible in kids’ animation shows. There is still not a space for gay males to see themselves be the heroes of their own story.

There is value in telling a story from the gay perspective that isn’t a caricature of a gay person. Often, gay boys grow up thinking that they don’t fit into the gay mainstream because they don’t fit into what they see, being oversexualized or dolled-up. They hardly see strong, masculine gays as having a journey that is worth telling. In contrast, lesbians get their story told in She-Ra and Korra, yet we still do not have an equivalent for gay Latin boys of color. Straight boys get Superman and Captain America and girls get Wonder Woman, and as a gay man, I find myself wanting to be Wonder Woman, but attracted to Captain America.

As gay boys, we are often attracted to strong, masculine men, frequently fetishizing straight guys as who we want to be with. Often this leads to us thinking that we should be more feminine because that’s who they are attracted to, seemingly unaware that we can be the type we look for in others.

When gay characters are introduced in kids’ animations, they are often in supporting roles, at best. Their challenges are often minimized, obliterated, or seen as humorous. Their struggle is never really explored but only utilized when the main superhero needs use of them. Don’t gay boys get a chance to see their own superheroes? Why must they fall into the background of various shows or be the token characters? Don’t they get a choice? It is sad to say that too often the answer is no. It is an honor to be included without having a say. What do gay males want? I can say for myself, that I want to see a gay Latino animated superhero that isn’t a dad, a background character, or a stereotype.

The lack of gay representation leads to a misunderstanding for gay boys and how they think they are supposed to be. Maybe it won’t mean much to many people, but maybe a series like this can be as impactful as lesbian and bisexual lead shows have been to that particular audience. But there is no reason to believe this neglect for the gay community will continue forever. Things are constantly changing in entertainment, so maybe one day this gay boy will finally see a gay superhero lead on a show that I always wanted to see when I was younger. A superhero that looks like me can change the world, and he might be braver and stronger than anyone ever thought possible. ​