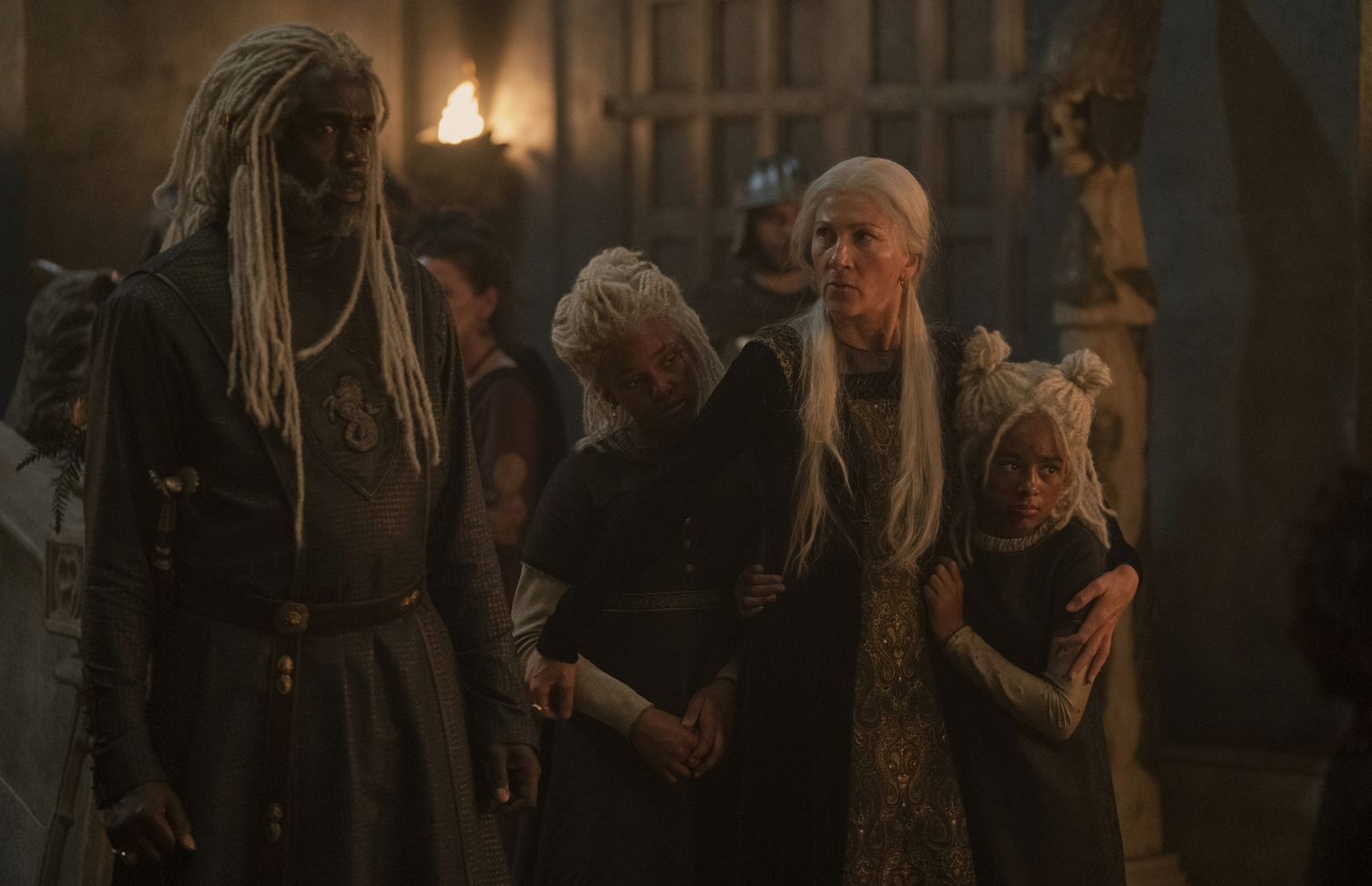 In Episode 7 of House of the Dragon, “Driftmark,” sadly we see the tomb of Lady Leana Velaryon (Nanna Blondell). Our beautiful curly-haired dragonrider is laid to rest. The entire Velayron family is there to grieve, and it is a somber day in Driftmark.

Present at the service is none other than Otto Hightower (Rhys Ifans), who has now been restored to his role as Hand of the King. How convenient. Laena’s uncle, Ser Vaemond Velaryon (Wil Johnson) presides over the service speaking only in high Valerian. At the end of the service, Laena’s cement tomb is plunged into the sea.

Rhaenyra Targaryen (Emma D’Arcy) goes to her son Jacaerys Velaryon (Leo Hart) and tells him he should provide the Velayron daughters some comfort after the recent loss of their mother. Jacaerys fires back and says he deserves the same sympathy after the recent loss of Ser Harwin (Ryan Corr) and Lord Lyonel Strong (Gavin Spokes). Rhaenyra quickly dismisses his words and advises that the Velaryons are kin and the Strongs are not. Meanwhile Queen Alicent Hightower (Olivia Cooke) and Ser Criston Cole (Fabien Frankel) give her a stern look.

Aemond Targaryen (Leo Ashton) and his older brother Aegon Targaryen (Ty Tennant) look over at their sister Helaena Targaryen (Evie Allen), who is playing with a spider and speaking odd phrases. The theory at the moment is that she’s prophetic. Aegon finds it to be rather odd that she is someone who could be potentially betrothed to him, and Aemond, in keeping with Targaryen tradition, says that its the only way to keep the Valerian bloodline pure. Helaena goes on to say: “Dragons of flesh weaving dragons of thread.” (Pay close attention to Helaena’s lines throughout these episodes as they will come into fruition as the Dance of the Dragons spring into action.)

At the post-funeral gathering, Larys Strong is there with his eyes focused intensely on Queen Alicent. As you may recall, this man just murdered his own brother and father to suit her needs (but also to suit his own as he’s now Lord of Harrenhal). Corlys Velaryon (Steve Toussaint) tells Lucerys Velaryon (Harvey Sadler) that one day he’ll be Lord of the Tide. Lucerys says he doesn’t want it. To which Corlys responds that it is his birthright.

Laenor Velaryon (John Macmillan) is wading in the sea and weeps over his deceased sister. Seeing Laenor this way angers Corlys, and he grabs Quarl Correy (Arty Froushan) and tells him to retrieve his patron. King Viserys Targaryen (Paddy Considine) asks Daemon Targaryen (Matt Smith) to come back to King’s Landing. Daemon refuses, stating he’s quite comfortable in Pentos.

Rhaenys Velaryon (Eve Best) and Corlys have a chat by the fire. She tell her husband that Laena would have done better with their maesters by her side. Corlys replies, “You are looking to place blame for the act of the gods.” A disagreement about Rhaenys succession ensues, and Rhaenys says it was Corlys’ own ambition and not justice for him seeking the crown for Rhaenys. Rhaenys proposes that she wants Driftmark to pass from Laena to her daughter Baela Targaryen (Shani Smethurst). She further goes on to say that Rhaenyra’s children are not of Corlys’ blood, but Laena’s are. Corlys then goes on to say that history does not remember blood, it remembers names.

Rhaenyra confesses to Daemon that she tried to conceive a child with Laenor, confirming that the marital relationship was indeed consummated, but to no avail. H was unable to provide her with a child. She further says that there was no joy in their sexual endeavors. Rhaenyra says she regrets that Ser Harwin went to Harrenhal and mentions the castle’s curse. Daemon immediately writes it off as a ghost story. Rhaenyra doesn’t believe that Alicent is capable of murder, but Daemon says he knows of depravity more than one can believe. Rhaenyra asks Daemon if he loved Laena, and he responds they were happy enough. Rhaenyra says she’s no longer a child, reaches in, and kisses Daemon. Niece and uncle proceed to engage in coitus.

Aemond sees Vhagar sleeping. The she-dragon is obviously distraught over the loss of Lady Laena. Aemond uses this opportunity to communicate with the dragon and manages to get her to stay tame. He is able to hop on her back — finally forming his bond with a dragon.

After Aemond completes his ride, Baela is furious he took her mother’s dragon and says that Vhagar was hers to claim. Aemond calls her a name, and they get into a fist fight. Lucerys also joins in to defend the Velaryon sisters. Jacaerys is present as well and grabs a knife. When Aemond picks up a rock calling the Targaryen kid a bastard, this is the last straw. Jacaerys drops his knife, throws sand in Aemond’s face, and Lucerys takes the knife and stabs, causing Aemond to lose his eye. (Helaena prophesied this in Episode 5 by the way.)

With this feud that between the sons, the Targaryen family is now showing the first signs of its split. Both sides argue that their sons were wronged, and Rhaenyra says that Aemond falsely accused her sons of being bastards. King Viserys asks Aemond who told him these lies. Aemond then blames Aegon after looking at his mother Alicent. Viserys then goes over to question Aegon. Aegon says, “Everyone knows. Just look at them.”

Still in denial, King Viserys demands the children apologize. Alicent tells Viserys she wants one of Rhaenyra’s sons’ eyes in return to pay Aemond’s debt. King Viserys finally pulls ranks and says, “Anyone’s tongue who questions the birth of Rhaenyra’s sons shall have it removed.” Alicent lets her temper get the best of her. She draws a knife and aims for the children. Rhaenyra stops her. Alicent then stabs Rhaenyra. Aemond says that it was fair exchange; he may have lost and eye, but he gained a dragon. Viserys then says this exchange has now ended.

Otto Hightower then meets with Alicent. She regrets the way she handled things. Otto sees now that Alicent has the determination to win the crown. He also knows that Viserys will forgive her.

As the maester stitches up Rhaenyra’s stab wound, Laenor walks in wondering if everything is okay. Laenor confesses that he has failed as a husband, but he loves the boys deeply. He goes on to say that he “hates the gods for making him the way they did.” Laenor further goes on to tell her that she deserves a husband.

Larys, the seed sower of discord, approaches Alicent and tells her he is at her service and reveals what an injustice it was for her son to be disfigured. Alicent says, “It is not necessary, but your devotion does not go unnoticed.”

Rhaenyra asks for Daemon’s hand in marriage, speaking in High Valerian. She knows by the two being together bound in blood that it will be more difficult to challenge her as heir. Daemon advises that Laenor has to be dead before he can marry her.

In the following scene, Daemon approaches Quarl and offers him money to kill Laenor. Quarl is seen in Corlys’ hall; Laenor walks in stunned why he is there. Quarl draws his sword and the two fight. Corlys and Rhaenys walk in and find their son Laenor in the fire, reduced to a pile of ashes. Rhaenyra and Daemon wed at the seashore of Driftmark, bound together by blood.

In the final scene, Laenor is revealed as not dead but in fact alive with his head shaven. He sails off into the Narrow Sea along with Quarl.