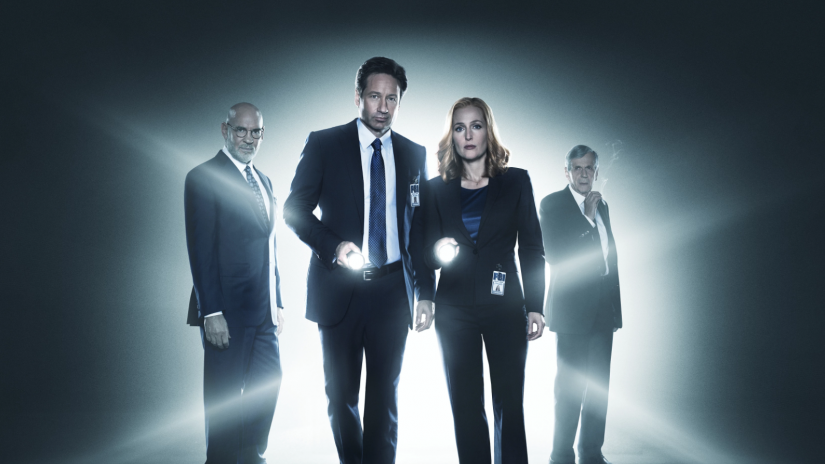 Last season of The X-Files ended on a major cliffhanger with mankind in jeopardy and Fox Mulder dying. When I sat down with the cast at New York Comic-Con, show creator Chris Carter said that everything was by design. He knew how he wanted to answer the cliffhanger while planning season 11. He further said that if you re-watch the end of season 10, you can see the seeds he planted to set up the premiere of season 11. For the actors it was a different story, they weren’t sure if this was the end or not.

After 10 seasons what new ground is there left to cover? For one thing, this season will explore Walter Skinner’s background. Bits and pieces have been dished out about Skinner before, but now we will get the chance to dive deep into his motivations — including seeing a young Skinner. For the previous seasons, Mitch Pileggi, who plays Skinner, said he hadn’t specifically developed his own backstory for Skinner. It came organically. He sees Skinner as a man with a strong moral compass. Skinner was initially set up as a roadblock to Mulder and Scully’s work. It was that morality that caused him to later distance himself from the Cigarette Smoking Man and become a champion for their work. That being said, their relationship, especially with Mulder, still has its issues as you can see in the trailer for season 11. Pileggi said that Mulder keeps crossing the line that Skinner is standing on.

Another topic that will affect this season is our current political landscape. “The show really is a science show. Scully’s science is the center, the core of the show,” Carter said. The conspiracy aspect of the show, Mulder’s theories, have always been shown to be outside of the norm. Now the world has shifted into one in which people believe in conspiracy theories more than science. It makes for an interesting time for The X-Files to air. Mitch Pileggi also hinted at the show being affected by politics. “This time is so rich for The X-Files because it’s all conspiracies and lies. Everyone is lying about everything. It’s about what we believe,” he said.

What else can we expect from Season 11? Having 10 episodes this season will give them more time to establish and nurture an arc. It will begin and end with mythology episodes with one in the middle that can also work as a stand-alone. Episode 1 will begin with a piece of the Cigarette Smoking Man’s backstory. We’ll get a funny episode written by Darin Morgan. Glen Morgan and James Wong are teaming up again to write an episode that could be as disturbing as “Home.” Speaking of that episode, Karin Konoval, who played the mother, will return in an episode about doppelgangers. Barbara Hershey is another guest star in this season. In the trailer, we had a small peak of Dean Haglund’s Richard Langly.

Coming back to the forefront is a crucial character that has seldom been seen. At the end of last season, Scully said the only way to save Mulder was through William, their son. This season, William returns and Mulder and Scully’s relationship with him will be explored. Carter said that fans should be pleased with the way that story is fleshed out. According to Pileggi, the story was handled brilliantly. Though Mulder and Scully are professional partners rather than romantic one, Carter implied that this season will deal with their relationship in a new way.

As for the two main characters, David Duchovny called Mulder fearless and the type of person who speaks the truth no matter the consequences. He doesn’t give up even though his solve rate is low. His resilience is what makes him great. It’s what attracted Duchovny to the role. Gillian Anderson thinks Scully is more relaxed than she used to be. Most likely due to age and the time she took off from the X-Files. Her favorite part of Scully to play is her no-nonsense attitude. When the show announced an all-male writer’s room for season 11, Anderson spoke out against it, leading to women writers being hired for the season. In reference to that, she said that in creating the character Scully, Chris did right by women. While she only read the scripts written by men so far, she’s interested in seeing what new voices will bring to the show.

Fan also look forward to seeing what the 11th season of this iconic show will bring.