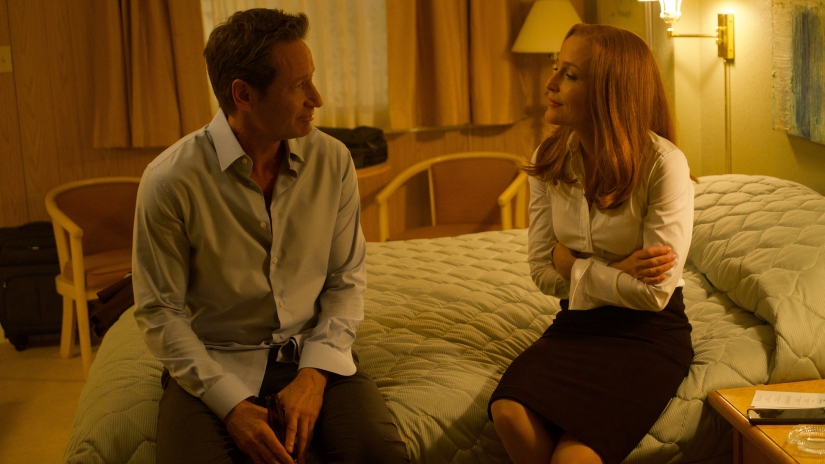 This episode of The X-Files asks: What if you saw an exact copy of yourself? What if that copy wanted you dead? In Henrico, VA, Arkie Seavers sees his doppelganger at a concert. In fear, he runs out of the concert and tries to drive away only to see the doppelganger in the car beside him. The copy pulls the wheel, causing the car to crash into a tree. This isn’t the first time this has happened. More than a few people have committed suicide after seeing their doppelgangers in Henrico. Mulder sees a possible x-file within this pattern of deaths. What follows is a case involving twins and game of hangman with deadly consequences.

There’s not even a whiff of conspiracy in this episode. No surprise Erika Price or Mr. Y. The Cigarette Smoking Man and his plans are never referenced. Even Skinner stayed in D.C. This was a standard monster of the week episode, almost completely divorced from the previous two episodes. Because of that, it feels more like an old X-Files episode than the other ones in this season. In an episode about doppelgangers, there are a lot of callbacks to other episodes. Both Judy and Chucky are played by Karin Konoval. She’s no stranger to the X-Files universe, having played the mother in the controversial season 4 episode “Home.” I felt slight callbacks to the season one episode, “Eve,” which featured homicidal twins (clones in that case) and the season four episode, “The Field Where I Died,” which dealt with multiple personalities and reincarnation.

Mulder and Scully find their first clue to this mystery in a psychiatric hospital. There they meet one of the twins, a schizophrenic named Judy. The walls of her room are decorated with papers bearing the results of many hangman games. She plays with her brother telepathically, she tells the agents. Mulder notices that one of the papers has Arkie’s name. I have questions. First and most important of all is: what prompted Mulder to visit her in the first place? He couldn’t see Arkie’s name from outside the room. Intuition, maybe? Or possibly good old fashioned ‘we need this to happen for plot reasons’? Second question: why is Judy in the hospital and not her brother? As we soon see, he has the same illness that she does. Maybe because there’s a history of troublesome women being institutionalized which made her a more likely candidate than her brother? I wonder if the writers considered this when making this choice.

Arkie is soon found dead in his jail cell after seeing his doppelganger again. Mulder suspects that Chucky, who found the body, and Judy have something to do with. They have some kind of supernatural mojo that is working through their games to kill people. Even Scully suspects them though her theory is based more on some unknown psychosis and not a paranormal reason because this is still Scully. Mulder visits Chucky who is not a very pleasant person and definitely not happy to see to Mulder. The walls of his overly cluttered house are also decorated with hangman games including two that bear the names of their parents. Yes, they killed their parents. No one is safe from these twins. Back at the hospital, Scully pays another visit to Judy. This is a much darker, angrier version of Judy. She attacks Scully with words and dookie — which I’m hoping is some kind of weird pudding and not actually feces. “Past your childbearing years. You’re all dried up. Not even half a woman,” Judy tells Scully.

It works. Judy gets under her skin. Scully asks Mulder if he thinks of her as old. “A woman thinks of these things,” she says. Or more accurately, women are forced to think of these things in a society that values youth. As a woman, you’re often seen as over the hill after 30. Especially in Hollywood where aging men aren’t limited in the roles they’re offered the way aging women are. There is a conversation to be had here about aging and how women are forced to contend with it a lot sooner than men, I just wish it was being had in an episode written and directed by women. I feel like we could’ve had a more nuanced one then.

Arkie’s lawyer is the next to die, this time in a way that makes a suicide ruling very unlikely. Side note: Arkie’s lawyer had way too many weapons. If he listened to Scully’s advice and calmed down, he might not have ended up with his head cut off. With the lawyer out of the way, each twin sets their sights on Mulder and Scully.

Meanwhile, Mulder and Scully are snuggling in Mulder’s pullout couch bed. They talk about their future and whether or not they see each other in it. This made me think of “The Field Where I Died,” which introduced the idea of Scully and Mulder always being a part of each other’s lives over multiple lifetimes. So much of The X-Files has been taken up with a will they/won’t they back and forth between its main characters. Over time it became less of a question and more of a fact that they were together. Then they weren’t. Now we’re stuck in some nebulous place where I’m asking my TV: are they or aren’t they, Chris?! I feel like I received my answer this episode. They are now. Or at least they were in this episode. Whether or not this was a one-time thing (or two times based on that ending) or something that will continue throughout the season, is up in the air. With Gillian Anderson leaving the show, the least they could give me is a season-long relationship.

Mulder seeing his double in the bathroom kills the afterglow and gets them back on the case. They rush to stop themselves from being the next names in Chucky and Judy’s sick game. While Mulder freaks out, Scully remains calm while her double sits pretty and angry looking in the backseat of her car. Chucky and Judy have an obviously unhealthy relationship but they agreed on their games. This time, something is broken.

They battle over whose name will be the next in the hangman game, Mulder or Scully. Finally, they put each other’s names down in frustration. They see their doppelgangers and soon die afterward. In the end, there’s no scientific or paranormal explanation for what happened. The case remains another unsolved mystery. Mulder and Scully don’t seem to mind though.

The episode ends on Scully opening the door to a smiling Mulder, getting ready to ‘reconnect’ again. I’m here for this time of fan service. #atths