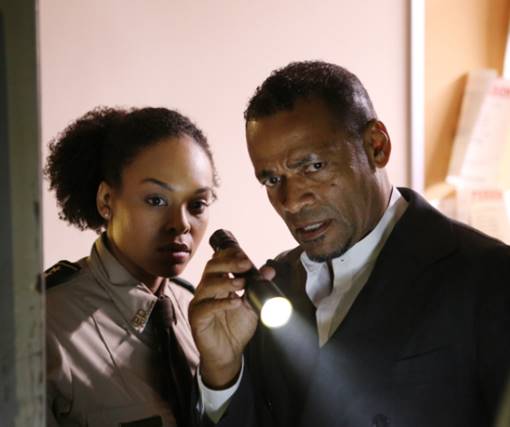 Putting it to a vote! Suggestions on the #SuperstitionSyfy hashtag? Open to more suggestions! cc: @BlackGirlGeeks

The description of the pilot episode: “Calvin Hastings returns home to reconnect with his family, but the reunion is cut short by a string of killings instigated by a supernatural villain only Calvin & his family can take down.”

While you wait, check out what director Mario Van Peebles has in store this season on SyFy’s Superstition, and find out if he’s experienced any supernatural phenomena himself!

Superstition centers around the Hastings family, owners of the only funeral home in the mysterious town of La Rochelle, Georgia. The family also acts as the keepers of the town’s dark secrets and history. Known for its haunted houses, elevated graveyards, odd townsfolk, and rich history of unusual phenomena, the town is also a “landing patch” for the world’s darkest manifestations of fear, guided into the world by an ancient, mysterious malefactor. XLrator Media’s Barry Gordon and MVPTV’s Mario Van Peebles(“Roots,” “Bloodline,” “Hand of God,” “Empire,” “Lost”) will produce, and Van Peebles will also write, direct and star in some of the episodes. Joel Anderson Thompson (“Battlestar Galactica,” “Boomtown,” “House M.D.”) has been tapped as showrunner and Laurence Andries (“Alias,” “Six Feet Under,” “Supernatural,” “The Pacific”) will executive produce.