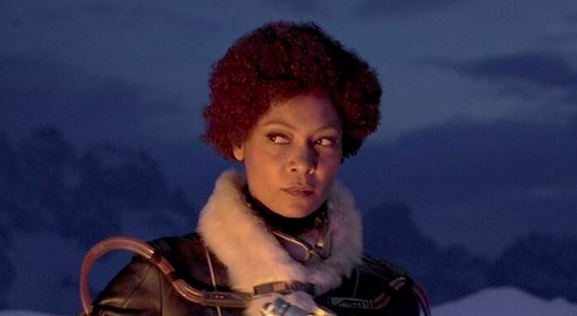 Republished with permission from Credits & Canon

Unfortunately, the presence of Black women has fit the definition of tokenism more than meaningful representation. The films have mostly been written by white men, who are the furthest in standing in Black women’s shoes or even understanding them in the fandom space. This is not to say that a white male screenwriter can’t write a complex Black female character (Quentin Tarantino certainly did for Jackie Brown), they just have to put forth more effort, research, and empathy which has not happened. Lucasfilm and Star Wars can make this right, but first, we must understand their failures:

As a Black Female Star Wars superfan who had grown up in the 90s reading the young Jedi Knight books (which also were not diverse), Val was special. Val was the first featured Black female character in Star Wars…with lines and everything! And no, Sharon Duncan-Brewster’s one line as Senator Pamlo in Rogue One does not count (if you are wondering who that is you make my point) but kudos to Brewster for snagging a key role in the upcoming Dune film. I was beyond excited and, even though my sister and I were one of the few people in the theater on opening day, I was going to enjoy the representation.

I guess Val had too much personality and likability because she was killed off in the first third of the film only to be replaced by ANOTHER brunette who looked exactly like the lead from the other A Star Wars Story film Rogue One. Even worse, her character’s death meant very little to the plot and very little to Beckett, her husband. He gets over it quickly, enough for them to recruit the replacement black person, Lando, to their crew.

Writer Joe Kasdan later expressed regret for killing off Val (I guess the optics of the decision only dawned on him after the fact) but too little too late. And the film has the infamous honor of being the only one in the Star Wars franchise to lose money. Maybe Val exiting stage left was a good thing but if she had lived there still might have been a chance she could appear in some other piece of content down the line. As it stands, there is little interest in the character and more focus on exploring Lando’s past during this time (and possibly Qi’ra and Red Dawn).

When you know what’s up | credit Lucasfilm

What was the point of this character?

There clearly were scenes with Jannah that were cut as the actress, Naomie Ackie, seemed so excited for her scenes during the 2019 Star Wars Celebration interview, discussing archery and horseback training. And, whatever justified that excitement level, did not make it to the final cut. Like Finn, her back story (a First Order trooper who defected), was intriguing. Like Finn, the execution was poor. Again, JJ Abrams and ‎Chris Terrio did not set up their BIPOC characters for success. Jannah was only there to further Finn’s development and Kelly Marie Tran’s Rose made it out even worse with 76 seconds of screen time.

And then after the film’s release (and an awkward AF scene between Lando and Jannah at the end of Rise of Skywalker) the novelization seems to suggest that she is Lando’s daughter. Get the entire F out of here. No surprise that her Black Series figure became a peg warmer.

Ackie, like Brewster, is off to bigger and better things with the lead in the Whitney Houston biopic so let’s look to the future and how Lucasfilm can correct this and do right by Black female representation.

Rayne Roberts, the VP of Film Development, is the sole Black Creative Executive at Lucasfilm. Roberts has been with Lucasfilm since 2012 and has touched almost every project (though not clear in what capacity) and will be in charge of the highly anticipated The Acolyte series with writer and showrunner Leslye Headland.

It would be nice if she got the same elevation when the time comes alongside Headland that Dave Filoni and Jon Favreau get. Also, elevate for the future films.

Do not hire JJ Abrams or Chris Terrio again to write on a Star Wars project. Chris Terrio never proved he could write a good script anyways (Batman v Superman??) and have you read JJ Abrams and son’s Spider-man comic run? Bring on Black female writers (and no, they are not hard to find).

Continue the Mandalorian approach for the Disney+, rotating out different directors — and add a Black Female Director to the rotation.

The Mandalorian has gathered a bevy of directors: Dave Filoni, Jon Favreau, Deborah Chow, Rick Famuyiwa, Robert Rodriguez, Bryce Dallas Howard, Carl Weathers, Peyton Reed, and Taika Waititi. This is a group that spans various levels of experience (some are seasoned directors for film, some prolific TV directors, and others who have only directed a few TV episodes). Deborah Chow is off to do Obi-Wan Kenobi and now Robert Rodriguez will EP The Book of Boba Fett. Rick Famuyiwa is supposedly still attached to direct Children of Blood and Bone for Lucasfilm. Also, given that Reed and Waititi are working on MCU movies (and a Star Wars film for Waititi), that is a lot of vacancy in the director’s chair. I’m sure Nia Dacosta, Gina Prince-Bythewood, Amma Asante or Regina King could fit right in.

Give us Rae Sloane, Sana Starros or Vi Moradi in a Disney+ Show or Film You Cowards

Believe it or not, non-film and TV canon has a great group of Black female characters. Most would never know that one of the most popular Star Wars canon novels, Lost Stars, has a Black female lead. And certainly, most people wouldn’t know that one of the major architects of The First Order was a Black female Grand Admiral named Rae Sloane. Sloane first made her appearance in the first canon novel, New Dawn, in 2014. Since that novel, she was featured in The Aftermath Trilogy about the last years of the Galactic Civil War which finds Sloane leaving for the Unknown Regions with a handful of Empire loyalists and child soldiers to build what would become The First Order. From that point of time in the canon, what happened to Sloane is still a mystery and, by the time that The Force Awakens starts, the First Order has an established leader in Supreme Leader Snoke.

Sana Starros is a smuggler who has a history with Han Solo and often interacts with Leia, Lando and Doctor Aphra in the comics. She has made enough appearances and is familiar enough to comic fans to warrant her own comic run but, if they are doing a Lando series, this seems like an opportunity for her to make her live action appearance.

Vi Moradi is one of the characters that you can interact with at Galaxy’s Edge at Disney World and Disneyland. She is from the Resistance era and made her first appearance in the Phasma novel, along with Captain Cardinal, but unsurprisingly, she is one of the few Galaxy’s Edge characters that doesn’t have an action figure (add it to the list as well as Tam from Star Wars Resistance). She also is featured in the canon novel Black Spire, in which she appears with her Galaxy’s Edge attire. I know that Disney seems to be veering from the Sequel Era but, given that Galaxy’s Edge exists in the Sequel Trilogy era, it seems like they should at least increase the profile of all characters that populate the land.

Since Star Wars content will now be coming out until the end of time, I hope to have a future so rich with representation that I can actually laugh at the day when Star Wars only had Black women behind alien make-up, with masks over their heads the entire film or in pointless roles. Until then, one can only dream. And hope.