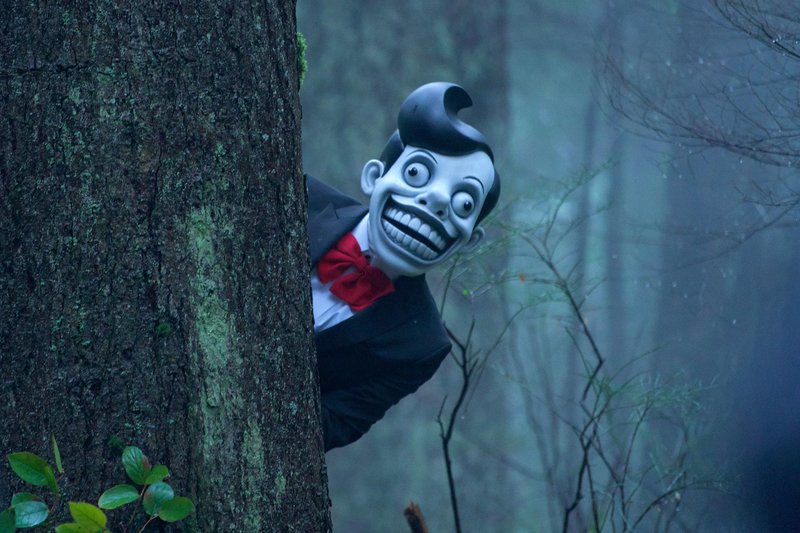 The X-Files episode, “Familiar” feels like a crossover between a Supernatural and a Criminal Minds episodes. We get literal and figurative witch hunts in this episode. Mulder and Scully arrive in a small Connecticut town where a policeman’s son has been killed by what looks like a wild animal. After investigating the scene and the body, Scully thinks the boy was killed by a person. A local, possibly the parent of the child. Mulder, of course, thinks there’s a more supernatural explanation and it has to do with witches. With years of resigned experience behind her, Scully brushes off his fantastical theories.

In the course of the investigation, the police chief’s daughter is killed in a similar way. The title “Familiar” comes from a witch’s familiar. In this case, the familiar takes the form of scary looking TV characters that lured the children out into the woods. When I say scary, I I mean it. I don’t understand how these are meant for children. Both the creepy teeth man and the no-eyes Teletubby knock-off are clearly the scariest things in this episode and there’s some kind of wolf or coyote or coywolf out there mauling people.

Going off of Scully’s profile, the father of the dead boy discovers that there’s a registered sex offender living in the town. He sees an opportunity to get justice for his son’s death and seizes it. A search of the offender’s house reveals an eerie dark interior, creepy pictures of children and a mask of the TV character that lured the boy out into the woods. Everything points to this guy being the one behind the crime. The town certainly believes they have their man. A mob gathers outside of his home waiting for him to return and when he does they quickly turn on him.

“What happened to the precious presumption of innocence?” Mulder asks Scully. “You and this mob are re-convicting him right here and now for the sins of his past, with a fervor that we see too often in this American experience of ours.” Mulder calls it what it is, a witch hunt. When you’re defending a sex offender I don’t think you have much of a leg to stand on but there is a point buried in there. We all deserve due process under the law but we don’t always get it. The father of the dead boy ends up executing the man right there on the street.

At the officer’s bail hearing, Mulder tells Scully that he won’t be punished. “The death of an innocent man, and the escape of a guilty officer,” he says. I don’t know if they meant this to be a nod to all the cases of Black men, women, and children gunned down by police officers who received no punishment for their crimes. If they did, I think they went about it the wrong way. Having a white cop kill a white sex offender does not a deep statement on the impact of police brutality make. Especially considering that this is an episode of X-Files written by a white man starring white people. The officer gets out on bail. His wife leaves him. Having gotten revenge by killing the potential murderer of his son, he feels invincible enough to get revenge against the police chief for having an affair with his wife.

Meanwhile, it turns out Mulder was right about it all being a witch. The police chief’s wife found out about the affair and cast a spell to curse her husband. She wanted to punish him for all the pain he caused her but she didn’t know what she was doing. The curse spiraled out of control, killing the two children, the officer’s wife and the ultimately the chief. All of them were mauled by the wolf, the witch’s other familiar.  “As we’ve discussed before, people don’t just spontaneously combust,” Scully said earlier in the episode. She’s proven wrong when that’s just what happens to the police chief’s wife. While trying to end the curse, she catches on fire and burns to death. Her book of magic remained unscathed. In the end, Scully and Mulder were both right about who was responsible for the deaths. We witnessed the evil in humanity with and without supernatural aid.