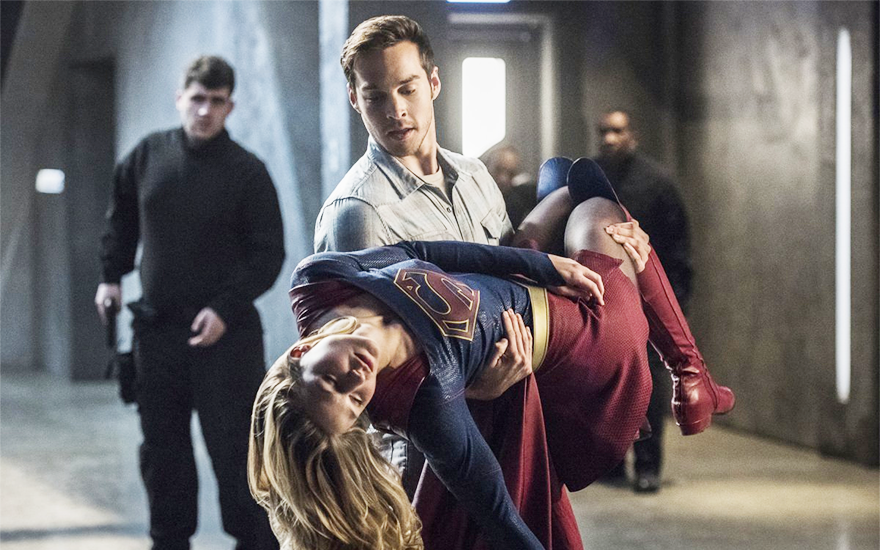 By Abbey White and Africa Belgrave

Undoubtedly, Supergirl saw quite a bit of change following its move to The CW from CBS. The second season, which wrapped on May 22, was perhaps one of TV’s most circular arcs, leading superhero Kara Danvers out of one love and one crisis back into… yet another love and other crisis. After killing the romance between James and Kara, the show seemingly realigned the focus on relationships, characters, and plot, with certain storylines seeing significantly more or less screen time. During that maneuver, fans also saw the introduction of several new characters, including the screen-time consuming Mon-El, Kara’s new bestie Lena Luthor, and the anticipated M’Gann, Maggie, and Guardian (James’ vigilante persona).

While the lady in the cape was busy dealing with (slave owning) boyfriend problems, the series expanded the love storylines of other characters. That includes the inter-species relationship between Winn and Lyra, in addition to delivering a coming out storyline for Alex Danvers followed by her fan-favorite relationship with Maggie. On top of all those interpersonal plot shifts, we were gifted with some special episodes — and we’re not just talking about the crossovers. There was the James-centric hour, “City of Lost Children,” Alex-centric hour “Alex,” and a finale return of Superman, among others. Looking at the Supergirl that was back on CBS versus the Supergirl we have now, there’s a lot to be excited about, but also, arguably, just as much worthy of pause. Here’s six things we think Supergirl got wrong in Season 2.

(The Entirety of) Mon-El

Mon-El, for all intents and purposes, replaced James as the male lead of the show during its second season. The change was a particularly bad look after Supergirl premiered on CBS, a network whose entire new slate of programming for the 2016-2017 season featured white male leads. James isn’t the first this has happened though, as The CW is no stranger to poor racial representation. The network has been called out before for both narrative and casting discrimination, including the treatment of characters like Raven Reyes in The 100, The Vampire Diaries Bonnie Bennett and The Secret Circle’s Melissa Glasser, traditionally all white casts with a token racial minority, as well as the removal of black-led programming following the UPN/WB merger. Which is why James’ treatment wasn’t necessarily unsurprising and yet, still infuriating.

Mon-El brought in all the cliche toxic tropes that Supergirl managed to avoid while on CBS: arguing with a girl you have a crush on, belittling her, getting her to curtail your manchild behavior, not listening to her when she has more expertise, lying about being a prince of a slaveholding nation, you know, the classics. His story arc revolved around becoming a local hero because that’s the type of man Kara would love. At no point do I believe Mon-El actually cares about Earth if Kara wasn’t tethering him to it. He is a stock CW character who dominated roughly two-thirds of season 2, that the writer’s not only broke up Kara and James to insert him, but that much became specifically about Mon-El. 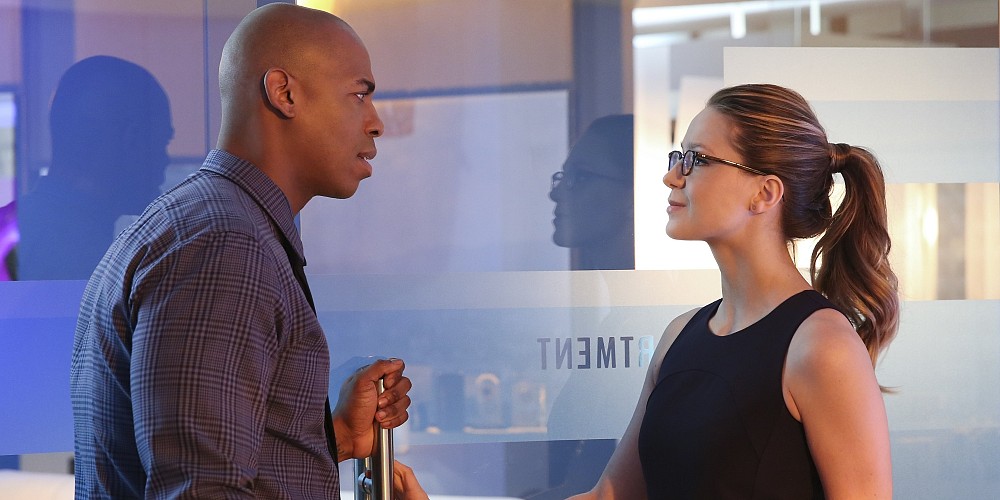 Speaking of James, the writers’ room appeared unable or unwilling to treat James with the same care and attention they paid to other regular characters (most notably Mon-El). This lack of care is most glaring when Mehcad Brooks, arguably Supergirl’s top billed male actor and the (previous?) male lead of the show, appears for less than 4 minutes per episode or doesn’t appear at all. It’s most obvious when his romantic relationship with the central character is abruptly ended with no season long preamble and no pushback from the character themself. It took until the twentieth episode of the second season–the fortieth episode of the show’s run–to get a “James-centric” episode. Only to have it mark the end of his poorly constructed superhero run.

Let’s be clear. This is not a call for James to get the same treatment as Kara, the undeniable female lead of Supergirl. This is a call  to stop the erasure of another black character from a CW show. As has already been said, this type of treatment when it comes to marginalized characters is not exclusive to this network, but they do it so often it has become one of The CW’s  trademarks. Black genre fans expect it from them, and they continue to do it even when the shows are bleeding viewers.

This is a catchall grievance, embedded in the show’s habit of trying to remind you: “Hey, we’re hip, we know the lingo, it’s LIT!” Plenty of shows have found great ways to wink-wink at or even incorporate the unique aspects of fandom subculture into their narratives while staying away from the corniness. Supergirl doesn’t seem to be one of them. Having Kara say things like “They were my OTP” (in regards to Britney Spears and Justin Timberlake) is a completely cringe-worthy and out of character moment. Of course, that’s a key term in “fandom” language, and the show has an engaged viewership that would understand the reference. But Kara Danvers, as a character, doesn’t participate in fandom. We know this because we, the fandom, watch the show. 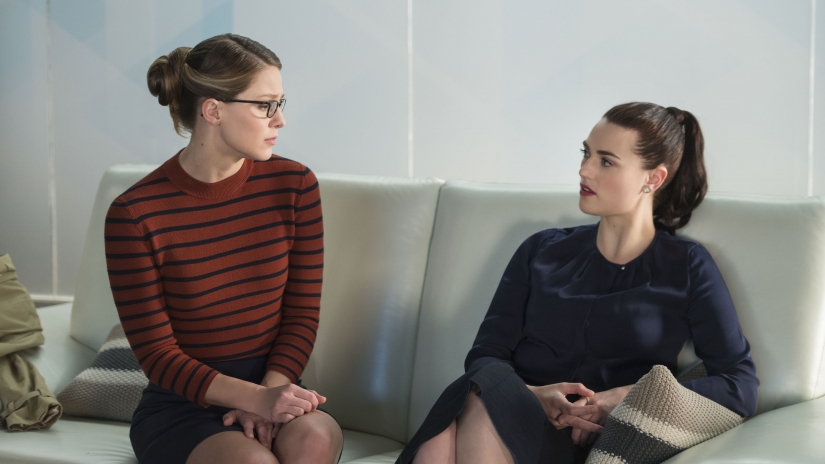 Despite Having A WLW Couple, It’s Still Kinda Queerbaiting

The fandom baiting doesn’t stop with language insertions. The most egregious example of how the series plays on fandom’s discourse and desires is the show’s baiting with Kara and Lena. Whenever both characters have scenes together, it seems like there is a commitment to playing platonic scenes as flirtatious, particularly in the latter half of the season. Kara and Lena flirt, in my opinion, much more than Kara and Mon-El ever did. This is not me misreading their interactions either, as Kara/Lena is the most populated ship tag on Ao3 (and back in March, Screen Rant did an entire piece on their subtextual relationship). Frankly, the writing reads as a deliberate choice to tease viewers who are invested in the fanmade non-canonical universe (fanon) where Kara is in love with Lena. And in theory, it’s not so implausible: Kara and Lena would have begun as natural foils who discovered they have similar goals and values. They would make a great on-screen couple. But it’s unlikely to happen on this show.

Like in the case of James’ sidelining, there is a history of this behavior on the network. Two of The CW’s most popular shows, The Vampire Diaries and Supernatural, have managed to kill off several queer women they introduced. And it wasn’t until 8 years after the network’s creation that it introduced a queer central character: Clarke Griffin. Clarke is revealed as bisexual in Season Two, Episode 14 of The 100 and her lesbian love interest, Lexa, is killed off 9 episodes later in Season Three. There is no precedent for viewers trusting that Supergirl will treat a queer lead with respect, especially when they’ve already given us a neatly packaged B-Plot relationship between Alex and Maggie. I mean, why should we ask for more?

The CW has committed itself to pushing the Arrowverse, and with Supergirl’s Monday slot they use the show to “kick-off” their crossover events. This usually results in ratings bumps because The Flash or Arrow fans tune in to a show they never watch. But what typically ends up happening is Barry and Cisco show up, tell Kara they have a problem, the episode ends and the entire audience is expected to tune in to a show they may not watch during a night they are probably doing something else. For fan not interested in The CW’s entire DC universe, their appointment with Kara & Friends is on Monday, not Tuesday or Thursday.

It doesn’t help that Supergirl’s universe is narratively not in the Arrowverse either. Marketing wise, it is, but they require science accidents to get Barry to National City. They need evil magicians to get Kara to Star City. Kara can’t just fly there when she wants. Then after it all happens, Kara just goes back to National City as if nothing really transpired. Nobody at the DEO or CatCo talks about Barry, Iris, and Cisco or how there’s a troop of time traveling heroes. If a viewer didn’t know those shows exist, how would they know if it impacted Supergirl’s universe? Furthermore, it feels like each crossover is written in a way that it’s not necessary to watch the other episodes to continue understanding what’s happening in Supergirl or to Kara. So what’s the point?

Outside of Kara’s friendship and romance with Mon-El, nothing has really changed for Kara over the last year. She ended Season Two the same way she started it: kissing her boyfriend and sending him off into the sunset. Even worse, she spent the victory lap of another alien invasion moping.

It’s clear the writers are invested in pushing the “Have It All” theme with Kara. And “having it all” apparently means being Supergirl, a reporter, Lena’s new best friend, Alex’s support network, and Mon-El’s girlfriend. Meanwhile, her desire to rescue her father from Cadmus seems to be forgotten for months at a time and her long-standing relationships with James and Winn seem virtually non-essential. They’ve also brought Clark into the equation several times, but these cousins from Krypton spend more time comparing powers then developing their own unique relationship. As for Alex, despite Kara’s involvement in her sister’s coming out process (and their single sister-centric episode)  how much did we see the sister’s bond? In what way and how much did Alex support Kara?

In a year of storylines, we’ve seen those around Kara morph into different people, a direct (or indirect) result of her super-human status. So are the writers actually okay with the fact that their lead hasn’t morphed out of a character defined more by her identity and relationship to others than her own self? Her greatest personal development isn’t clear, and that sends up red flags. You just can’t botch the development of the title character.

Photos of Supergirl are courtesy of The CW Network

Abbey White is a freelance entertainment and identities journalist who has written for USA TODAY Network, The Mary Sue, Black Girl Nerds, ScreenSpy and Paste Magazine, among other outlets. She currently lives in New York City where she serves as an editorial intern for The Nation magazine.