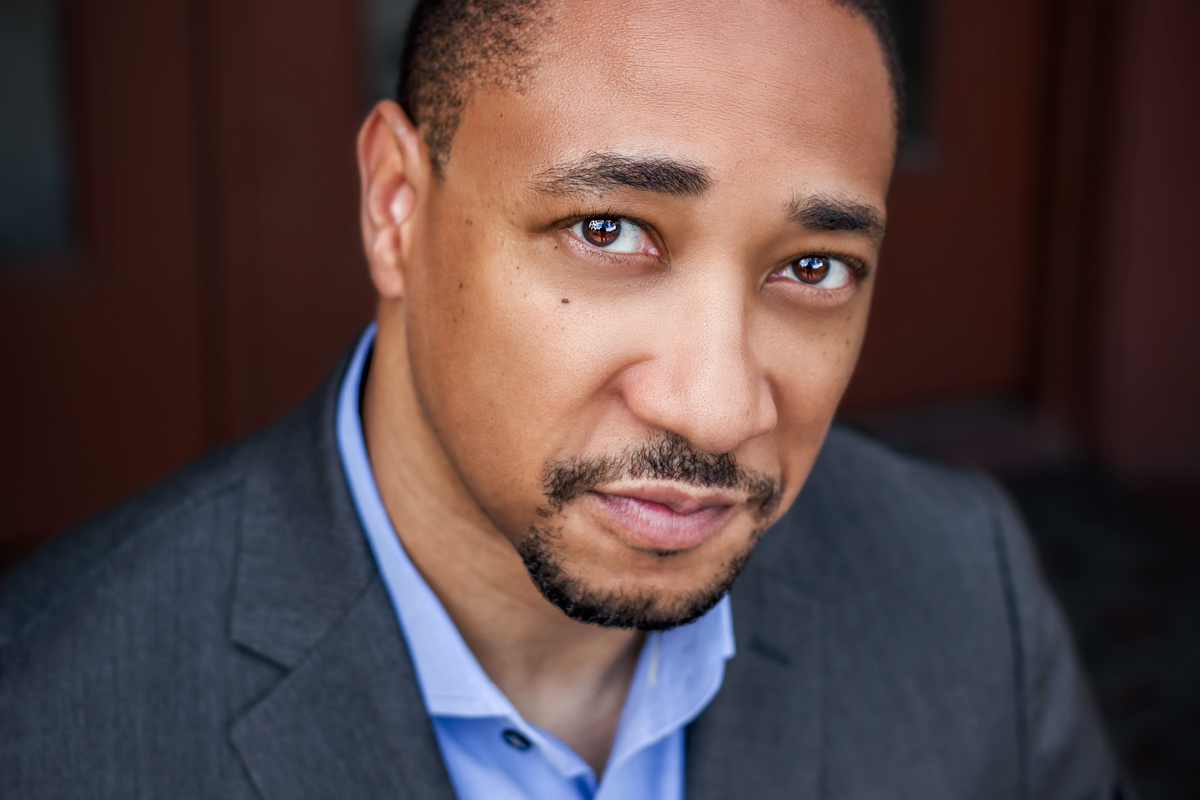 The premiere of Black Lightning is less than two weeks away and we could not be more excited! At the center of Black Lightning are complex stories written by us and in our own narrative. One character that has a complex relationship with Jefferson Pierce and Black Lightning is Inspector Henderson portrayed by Damon Gupton (Empire; Bates Motel; Whiplash). Having been one of the few media outlets on set for a visit, Black Girl Nerds was granted an exclusive sit down with the cop who is juggling a lot of pressure and misconceptions.

Kay-B: Thanks for chatting with us at Black Girl Nerds.

Damon: Thanks for having me, I’ve been looking forward to this interview.

Kay-B: So diving right in, Inspector Henderson started off in the Superman comics and then made a couple of appearances in Black Lightning. So tell us a little bit about this version of Henderson.

Damon: This version of Henderson is completely different from the other versions. This version is pretty unique because this is a very real world that we are operating in, so I wasn’t able to draw from the Henderson of the comics as much as I thought I would. One of the only physical similarities is maybe that he wears a hat from time to time (laughs). I think the one thing I am able to pull from the earlier representations of him, which have been both white and Black, is his doggedness. The fact that he is a good cop and believes in the letter of the law. That’s the biggest through line I have, but this is a completely different Henderson from the comics.

Kay-B: His doggedness is something that you see in the first two episodes, and that he is very much on the side of justice and doing things right. There is one scene with Jefferson in particular, where Henderson is upset with him for stepping outside of the law. He admonishes Jefferson for doing it by himself, versus going through the proper channels. Tell us about his relationship with Jefferson now, and does he have an inkling that Jefferson is Black Lightning?

Damon: He has no idea that Jefferson (Cress Williams) is Black Lightning at the moment, and I think we have to keep that going for a good while. I have a hard time personally with the suspicion of disbelief, but I am enjoying this particular suspicion of disbelief. I know at some point we will have to tear it down, but there will be enough build at that point for Henderson to be furious with his childhood friend for keeping this from him. He has kept this secret not only for the duration of our show, which is 10 years after Black Lightning retired, but when Black Lightning was around before. Henderson has every right to be upset, because this has been his boy all along.

Kay-B: That’s true, they are not just childhood friends, they are also neighbors, but almost like brothers, because they have been friends for so long. It will definitely be a point of contention that the only people who do know Jefferson’s secret identity are Gambi (James Remar) and Lynn (Christine Adams), and that Jefferson didn’t trust Henderson enough to share.

Damon: Exactly. Henderson’s likely going to say or think: “Maybe I could’ve helped you more, laid off you more because I have been hating on you and you’ve been getting on my nerves.”

Kay-B: Very, very true. So, you’ve been doing TV and film for a long time, and have even played people in law enforcement before, so why Henderson and this particular role? Did you read the Superman comics version of Henderson?

Damon: When Salim Akil (Co-creator & Executive Producer) offered this, at first I was like ehh, it is another cop. I wasn’t sure if I wanted to do it, but then I realized that it was a cop written in our voice. I have never played a cop written by someone like Salim and presented by someone like Mara Brock Akil (Co-Creator & Executive Producer) or even in this realm. Me as a fan of comic books, I had never really known of Black Lightning. I knew of Black Panther and all of the Marvel stuff. Once I started researching the history of Black Lightning, I thought how cool would it be to be apart of the first African-American superhero family on television. It is a whole different viewership to try to connect to on a network that definitely tries to build relationships with its viewers. I wanted to be apart of this project that tells stories about our families and communities. So there are a lot of things that came into fruition and I thought this is a cool kind of project to be involved in because nothing has been done like this before. So it was hard to kind of pass that up.

Kay-B: Right, and like you said, this project tells our story from our perspective and from our voice. So my last question is how do you feel about taking on this role and the weight and/or responsibility of changing how cops are seen on TV? Since there are a lot of socially relevant topics this show touches on, I mean one of them being one of the very first scenes in the pilot. Yet you are still portraying a man of the law who is by the book, regardless of what his peers are doing. What’s that dichotomy with his peers doing to be like?

Damon: That was the hook for me, that very scene you just mentioned. I asked Salim if he really was going to go there and he said yes. Generally, nobody talks about this, except maybe on the Wire, which is classic. But here’s this guy who represents all of these law enforcement officials out there when the shootings happen when the riots happen and when people get upset, there’s this Black cop. What’s going on in that person’s mind? They are apart of that community and know some of the people impacted by the crimes, so what’s in their heart? I don’t ever really get to hear those stories. So I feel like that dichotomy is an incredible story for an actor of color to be able to play because it is complicated. You are of the law and trying to help your own. You’ve achieved so much, you’re the head of a division, are self-actualized and an empowered Black man trying to do good. He is doing good and people can’t see it or they don’t want to hear it.

Kay-B: But also you know, the racism still exists…

Damon: Exactly! So he has to fight…that’s completely the dichotomy he is in daily. He has been called all these things, but he really is trying to help his community. The community keeps including him in the group of police that are killing people in his community and he is saying: “I didn’t do this!” He as a Black cop is struggling because wants to fight against those cops too. But he still has to somewhat stick with the police force, so it is good dramatic material. He will be exploring those relationships for sure.

Kay-B: Well I hope we see him exploring the relationships with the cops that are the problem, abusing their power and destroying his community, in-depth this season.

Damon: You’ll have to stay tuned.

Kay-B: Thanks so much Damon, really enjoyed talking to you!

Check out Black Lightning when it premieres on the CW on January 16th at 9/8 central, right after The Flash!