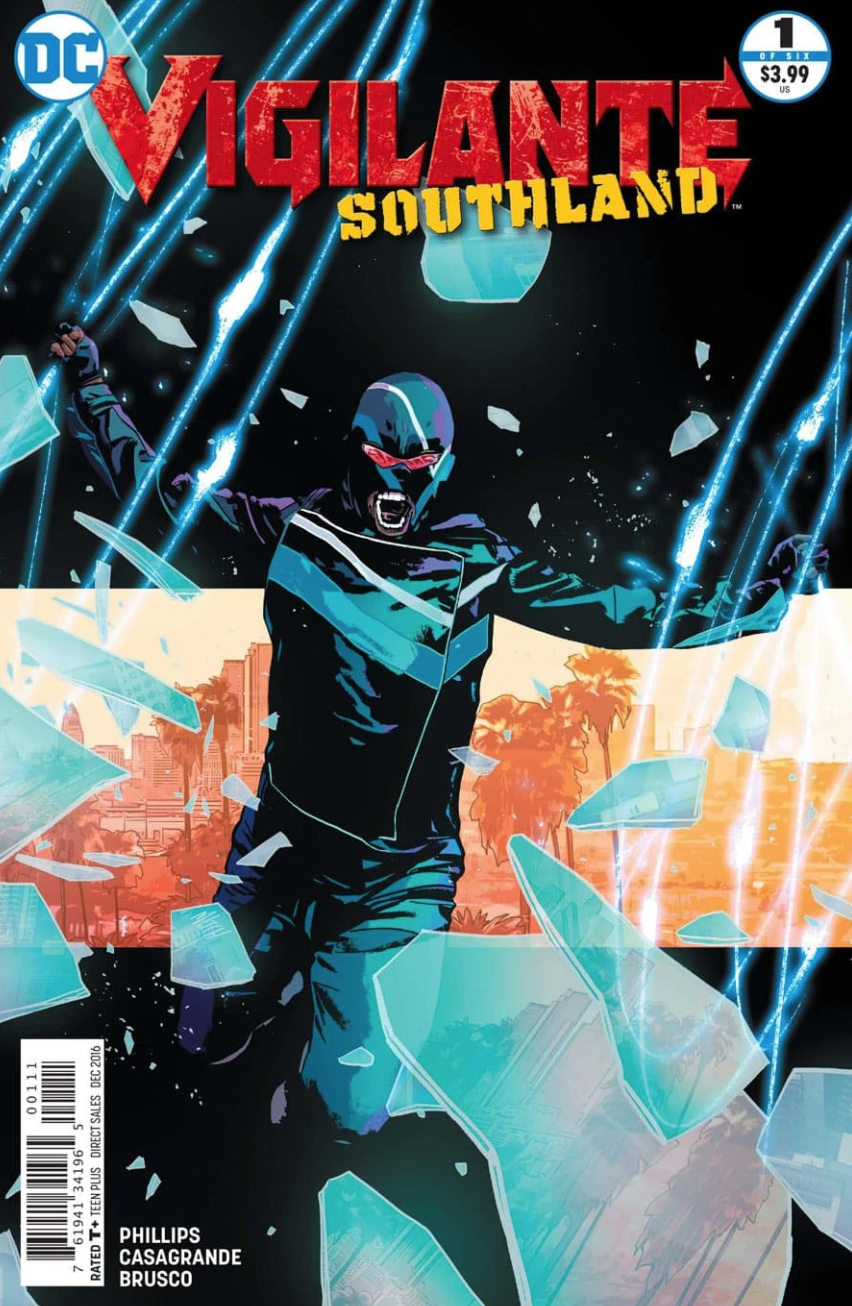 Three years ago, I first noticed the continuing slow crawl of diversity with an all-female X-Men team. Last year, the Battleworld nation of Arcadia gave us a female team of Avengers known as A-Force (because Avengers would have been too obvious); Kamala Khan emerged out of the terrigenous mists as the new Ms. Marvel, and Jane Foster intrigued us as the Mighty Thor. Now, Riri Williams is Iron Heart. There’s been this slight shift from the single white female to titles (surprisingly) with Black leads.

While DC has pretty much stuck to its roots during its rebirth — except for all the Robins (see We Are Robin) — they are trying out the latest reincarnation of Vigilante.

From the Old West to Manhattan, this anti-hero lives again in a six-issue miniseries, Vigilante: Southland. In this iteration, Vigilante is a professional basketball player-turned-janitor who goes on the hunt for the killer of his professor girlfriend, Dorrie, after she poked her nose where it didn’t belong. Elena Casagrande (Suicide Risk, Angel) does a great job on the pencils and inks, but I hope the angry Black man isn’t the only visage to be portrayed. I haven’t seen a real-crime title from DC in several years; some independent publishers have some (including a James Bond title), covers of TV shows like Blacklist and Orphan Black, and the lunar crime fighters in The Fuse. As this is written by crime novelist Gary Phillips (GI Joe, Frontline, Shot Callerz), we are assured of a well-developed story.  The question is whether this will be a good comic.  After the issue, the weed-smoking, video-game-playing protagonist checks a lot of the boxes on Black stereotypes, so I await Issue 2 and further plot development.

Marvel’s newest arrival from the terrigenous cocoon is Morris Sackett, and (you guessed it) he is a Black basketball player. Written by Geoffrey Thorne (Solo, Knight Rider), the Mosaic prequel was very entertaining as an already-emerged Sackett breaks into a S.H.I.E.L.D. facility, makes fools of the stalwart Agent May, the powerful Agent Daisy a.k.a Quake, and super agent Phil Coulson, by stealing Coulson’s car.

Issue 1 shows his origin story: the loss of his physical form and the ability to jump from one person to another, taking with him the memories of those he inhabits wherein he ends up helping his new persona rob the Russian mob and then moves on. There’s not much story, but there is an entire planet of people to inhabit.  Khary Randolph (Quixote, Spider-Man, X-Men) pens some amazing panels, providing a great deal of depth to the character.

Prowler, another title from Marvel, continues the story from Amazing Spider-Man #17. In Amazing, the Jackal, one of Spider-Man’s foes, has set up a medical company called New U, which has been cloning the loved ones of various supervillains in exchange for their services. Hobie Brown (Prowler), who has been working for Spider-Man, goes to investigate the development and is killed by the new Electro, Francine. Hobie is cloned and is convinced to join the Jackal, especially because he finds out that he must take a pill daily to stay alive.

In the first issue of Prowler, Hobie manages his new duties as head of New U security by wrangling the Jackal’s new supervillain clone lineup. He steps out to do a little crime fighting and is rebuffed by his new boss. If you’re not familiar, Hobie Brown is a smarter than average guy who was working as a window washer until he invented the tech to support his alter-ego Prowler. Initially, he started out as a criminal and then reformed and helped protect Spider-Man’s identity by sometimes impersonating the wall-crawler. The first issue seems to suggest New U is on a humanitarian mission, but come on with all the supervillains in the basement. Who are they trying to kid?

These three titles provide Black men in the lead and are written and drawn well, mostly by Black men. However just having Black characters is not enough. When I suppress my joy and take a step back, these characters still feel to me like the Blaxploitation characters from the 1970s. As Marvel and DC explore diversity, it should be remembered that diversity is more than race. I am hoping these characters can rise above the stereotypes found in each of these books and provide a more representative model of Black men.

So just to help out, there are about 300 players in the NBA, with about 224 or them being Black, so the other 21 million Black men are obviously in other professions. About a half a million are in jail, so as we venture into diversity in the 21st century, I would like a couple of titles to reflect those good 20 million Black men who go to work every day, punch a clock, pick up their kids, love their wife, and wander into the terrigenous mists, get bit by something, get irradiated by something else, and become a superhero.