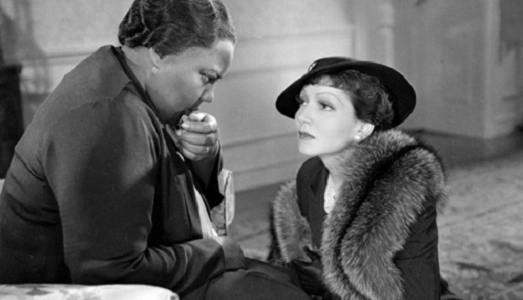 The story in the film Imitation of Life (1934) was ahead of its time.

It tells the story of a single white mother and a single Black mother who live together and navigate how to best raise and provide for their daughters. While there are areas in the film worthy of critique and that certainly do not age well, there is so much this film accomplished when it came to talking about race, particularly mixed-race identity. This Women’s History Month, I want to shed light on one of the lead actresses of the film adaptation, Fredi Washington, an actress, and civil rights activist.

Fredi Washington plays Peola, a Black mixed-race light-skinned woman who passes as white in order to be accepted by those around her and rejects her dark-skinned monoracial Black mother throughout the film. Viewers are able to empathize with both Peola and her mother, Delilah (played by Louise Beavers), for the way racism impacts their direction in life and their life choices. Delilah is seen as a submitting to societal circumstances of work because it was a means of survival, and Peola is aiming for an “in” with white people as a means of survival.

It wasn’t a small feat to get this film into theaters either. Imitation of Life was made in 1934, which means that the Hays Code, a set of “moral” policy and guidelines filmmakers were obligated to follow before releasing their work to the public, was still in effect. One of their rules included preventing any form of miscegenation being depicted. Fredi Washington grew up with biracial parents. With her being cast in a role that was clearly written for her instead of, let’s say, a monoracial white woman, Hollywood was up in arms.

I prefer the later 1959 film adaptation of Hurst’s novel, starring Juanita Moore and Susan Kohner, more than this one because of how the ’30s adaptation, and the book itself, perpetuated a lot of “mammy” stereotypes in the leading Black character we did not need or ask for. It also perpetuated this narrative of it being okay for a white woman to be successful at a Black woman’s expense and original creation; in this story’s case, a family pancake recipe. However, I am impressed by how the filmmakers supported Washington in 1934 and their intention for the film’s main message by making sure the public saw it in theaters. Again, the fact that they cast a woman that fit the description of the role, unlike in the ’50s adaptation where a white-passing Latina (Kohner) was cast, still speaks volumes to me.

Moreover, Washington used her platform from this film as a way to advocate for the rights of Black people throughout the rest of her life. When asked whether she would pass like the character she portrayed in Imitation of Life, she often talked about how she would refuse to give into “white superiority,” and how the purpose of portraying Peola was to show the effects of white supremacy, causing internalized oppression on top of the externalized oppression Peola is often facing.

This form of representation and bravery paved the way for many more mixed-race actors in Hollywood films and television shows. Today, many mixed-race actors and filmmakers are known for their advocacy such as Zendaya, Daveed Diggs, Taika Waititi, Yara Shahidi, Amandla Stenberg, and more. We have shows such as Black-ish and Mixed-ish navigating how interracial couples talk to their children about biracial identity, and This is Us navigating the struggles of transracial adoptees.

Although it has been on hiatus, the Mixed Remixed Festival was founded in 2013 by New York Times best-selling author Heidi Durrow to celebrate multiracial stories in media and art. Each year they give an award to high profile actors who have pushed for multiracial representation in media (e.g., Keegan-Michael Key and Jordan Peele for their comedy in 2013 and Taye Diggs for his children’s book Mixed Me about his son in 2016).

The Supreme Court case Loving vs. Virginia legalized interracial marriage in 1967. The demographics of mixed-race people have grown at a faster pace with the rise of interracial marriages since the early 2010s. Therefore, it’s nice that we’re seeing more interracial couples on screen and more mixed-race narratives becoming normalized. Some are even being normalized to the point where these characters are present and visible without their race being the centerpiece of the story.

I grew up watching Imitation of Life a lot with my family, and it was one of the first films I saw that was representative of my Black multiracial identity at a young age. Women’s History Month is all about celebrating women who have paved the way for more gender minorities to have their own come ups, as well to normalize our existence, representation, and rights to autonomy. We still have a long way to go in regards to multiracial representation, such as for dark-skinned mixed-race folks as well as mixed-race people not mixed with whiteness. But I believe that we wouldn’t come as far as we have without women like Fredi Washington appearing in movie theaters.