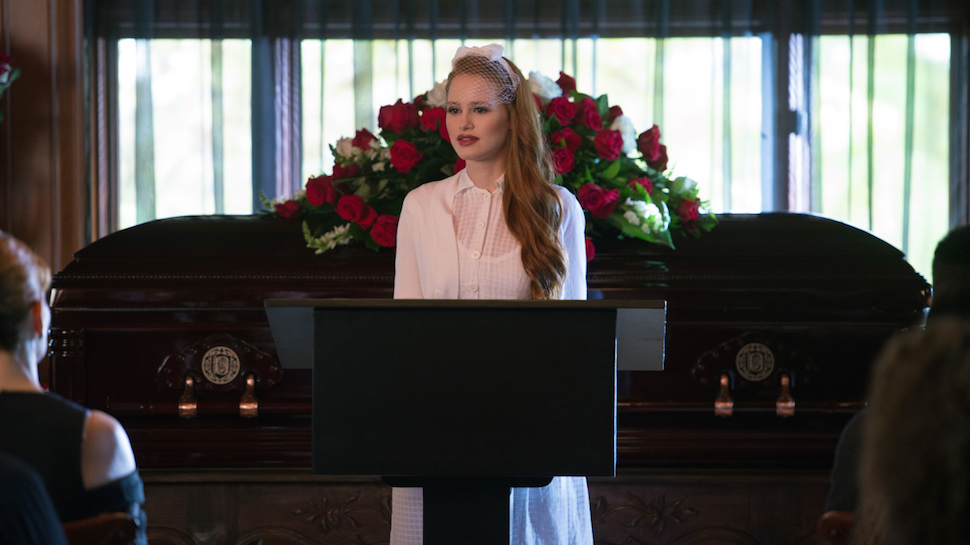 I think we can start saying with some certainty that most of the parents in Riverdale are terrible. Fred and Hermione are exceptions to this rule, though Hermione enabling her husband’s foolery is probably going to have an adverse effect on Veronica sooner or later, and Fred getting involved doesn’t bode well for Archie either. At least that’s what I’m assuming because there’s no way Riverdale can expect me to care about what these boring grown folks are doing in their free time when their kids are unaffected.

Penelope and Cliff Blossom are probably equally uninteresting, but we don’t have to spend too much time with them outside from seeing how their parenting affected Jason and Cheryl. It’s not unexpected that the Blossoms are the worst, not with the children they produced. Now Jason’s desperation to flee Riverdale looks a lot like just fleeing his parents, who fill their son’s memorial with suspects in his murder and prohibit Cheryl from speaking at the service.

If anyone benefits from “Heart of Darkness” (and not many characters do), it’s Cheryl, who threatens to become a gimmick at any given moment. A strange combination of 90210 and The Craft, Cheryl is alternately weird as hell or totally cruel. Neither of these makes sense in the context of her being so popular, and I’ve never felt more vindicated than when Cheryl explains that no one wanted to go to her birthday party, so Jason insisted on combining their previously separated parties to protect her feelings. Of course no one wanted to go! Has Cheryl met herself? The only question is why that changed, but I’m coming around to accepting the Blossoms’ inexplicable allure as just that: inexplicable.

Even if Cheryl remains totally mean, “Heart” cements her as a sympathetic character. It’s done this before somewhat, but her moments of commonality and kindness with Betty and Veronica eventually gave way to Cheryl’s old habits. She went from crying on Veronica’s shoulder to dropping snide remarks about Hermione’s waitressing to cuddling up to Veronica at the drive-in, and now Veronica’s the sole attendee of Cheryl’s pre-memorial sleepover (still, no one wants to go to Cheryl’s parties). Veronica, a former mean girl herself, at least has the benefit of having a very decent (if misguided) mother, and she’s much kinder to Cheryl than Cheryl’s behavior would warrant. She encourages Cheryl to defy her parents and honor Jason, but not even she’s expecting Cheryl to make her speech in the white gown she wore on July 4. It’s a public moment of humanity and emotion, which of course means the Blossoms hate it and punish Cheryl afterward. So now we have something to watch Cheryl triumph over, but considering how Jason ended up, it’s a question mark if she’ll be able to.

Also felled beneath her parents’ awfulness? Polly Cooper, who remains a ghost. The Polly/Jason relationship has been a recurring question, alternating between some tragic teenage love gone wrong to something predatory and gross (on Jason’s part). This episode still doesn’t clarify anything, with talk of Polly attempting suicide after an argument with Jason and compelling her parents to send her away for mental help. But according to Cheryl’s creepy grandmother, Polly and Jason were planning to get married–not that either of their parents approved. So here’s Polly, offscreen and isolated from the world, because the Coopers and Blossoms are in a blood feud.

Yes, a blood feud. It’s not nearly as fun as it sounds, just the Coopers staying mad that some great-great grand someone was murdered by some great-great grand Blossom. As far as revelations go, this one is beyond weak, but we’re meant to take it as a potential motive for Jason’s murder. Betty’s dad (awful parent #12531) definitely stole Keller’s murder board so that looks damning, but it’s too simple, and too early, to assume he murdered Jason.

Like usual, Archie’s pretty much on another planet. Except a brief scene with Penelope, Archie has zero investment in this murder mystery (which I find oddly amusing). He’s all wrapped up in how he’s gonna play football and do music, a question which hasn’t gotten any more interesting since the last time he asked it.

If Riverdale actually bothered to follow through on its storylines, it would have picked up on Archie after Grundy’s departure. Despite Archie kicking the crap out of a punching bag and Veronica and Betty suggesting Archie may be punishing himself, Grundy may as well have been a mirage. There’s no discussion of how Archie, who was convinced Grundy really cared about him (she didn’t), feels now that she’s gone. The emergence of a new music mentor (a man and apparent professional who isn’t about to start having sex with minors) would be the perfect opportunity to examine how Archie’s musical ambitions were tied to Grundy, but that would mean acknowledging how messed up that pairing was, and Riverdale doesn’t want to do that.

Though Archie’s not as broody as usual, the only thing elevating his storyline are the girls who share some of it with him. Valerie (who marries Archie in one of the comic canons) looks at him like she’s willing to risk it all, and Archie definitely shares the sentiment. The two making eyes at one another (even with Veronica and Archie doing the same) is good stuff. Like Fred, I’m going to take this time to be glad Archie’s into someone age appropriate.