Lena Waithe is virtually a household name by this point, with her momentous Emmy win a hint of further accolades to come. Like many fans, there was a mix of excitement and trepidation at her casting in the upcoming blockbuster and Steven Spielberg adaptation of Ernest Cline’s novel, Ready Player One. Would she be somehow maligned or handled poorly in her first foray on the big screen?

As it turned out, these minor fears were completely unfounded, and Waithe’s marvelous turn as a virtual reality gamer badass in the film proved that she could hold her own in the action-packed feature-length sci-fi realm. She’s apparently open to more of these opportunities, too, so long as they fit into her busy schedule as a creator, showrunner, sneaker enthusiast, writer, actress, and all-around emerging entertainment mogul.

Black Girl Nerds wants to thank Lena Waithe (a/k/a, The Iron Giant herself) for taking some time to speak with us in advance of the Ready Player One release.

Leonardo Faierman: Thanks for taking the time to talk to BGN! I wanted to first mention, because I wanted to pat myself on the back, that I saw you sneak into the Paramount for the Ready Player One world premiere, but I did not blow up your spot, on purpose. I’m like, “I’ma just let Lena get in to see the movie.”

Leonardo: You came in in the middle of a mob of people. You didn’t come in on your own, you just mixed in with the crowd. I was like, I know that’s Lena, but I’ma just be silent.

Lena: Yeah! I tend not to be too Hollywood, I just like to roll in with the folks.

Leonardo: I don’t know if you saw my review or not, but I actually was a bigger fan of the movie than I was of the book.

Lena: I don’t know if I saw that one! It’s interesting, because I think the movie definitely has its own personality. On the panels with Steven, he said–and I agree–they could’ve made twelve different movies from the book. There’s so much going on…you could literally pick and choose where you’d want to focus the story. And this is the story that Steven and Zak [Penn, screenwriter] decided to tell. And, I think, having read the book and the script, and seeing the movie, I think this is a fair movie for people who do enjoy the book, who I think will get a real kick out of it.

Leonardo: I think it somehow satisfies both things. I think people who are diehards for the book will see the book reflected in the film. And people like me, who had a bunch of issues with how they treated stuff in the book, will appreciate how the movie softened or smoothed those things out.

You were mentioning working with Spielberg: what was that experience like?

Lena: It was phenomenal. A lot of people are like, what is he like as a director? But to me, what I loved most was getting to know him as a man, because he’s a phenomenal human being. He’s a family man first. I mean, his wife was on set most of the time. His dad came to London, I got to meet him, and I got to meet two of his kids, which was fantastic. That’s the kind of set he runs, it’s very familial. At the same time, George Lucas also swings by to say hello. Tom Cruise comes to visit the set. Paul Thomas Anderson swings by. You have the yin and the yang, but also, that being said, George and him have been best friends for forever, so it was like two old buddies hanging out, sharing notes. It was all very home-y.

Also, the crew; a lot of them he’s worked with for years–some of them, decades. There’s a real shorthand, a real trust there…it’s a real space, you feel like you can do anything, like you can try anything. And I think that’s why his movies have such a great sense of wonder, because he really does set that tone.

He also disarms you right away. He’s like, “I get it, I know who I am, I know this is a big deal. But at the end of the day, we’re all on the same team, and we’re all working on the same goal.” I think he reminds you that he’s just as nervous as you, because he’s like, “I don’t want to get this wrong. I’ll need your help to make sure we get this right.” So I think that’s what’s so great about him, the kind of human being he is, which I think folds into the kind of director he is.

Leonardo: I’ve always had that impression from just experiencing the work that he does. And, additionally, I’ve known for many years that he’s a gamer, he’s done gamer things before, and this is a gamer movie. It’s a weirdly perfect combination of talents for this particular property.

Watching you, I feel like you’re having the time of your life in this movie. If you’re not, you’re really making it look like you are.

Lena: [laughs] I truly am! And the thing is, this is my first film that I’ve ever been in. Look, it’s a wild ride, but it’s also a departure. From Master of None, where we’re always trying to be as grounded as possible, wanting it to feel so naturalistic, we want people to feel like they’re just hanging out with their friends. But in this space, it’s like, how big can you be? If you’re going to jump, do it with all your energy. If you’re going to shout, do it with all your energy. And I think that’s what’s so cool about this film, that I got to do something really different.

Also, it’s motion capture, so we had to use our bodies, and really use our facial expressions. 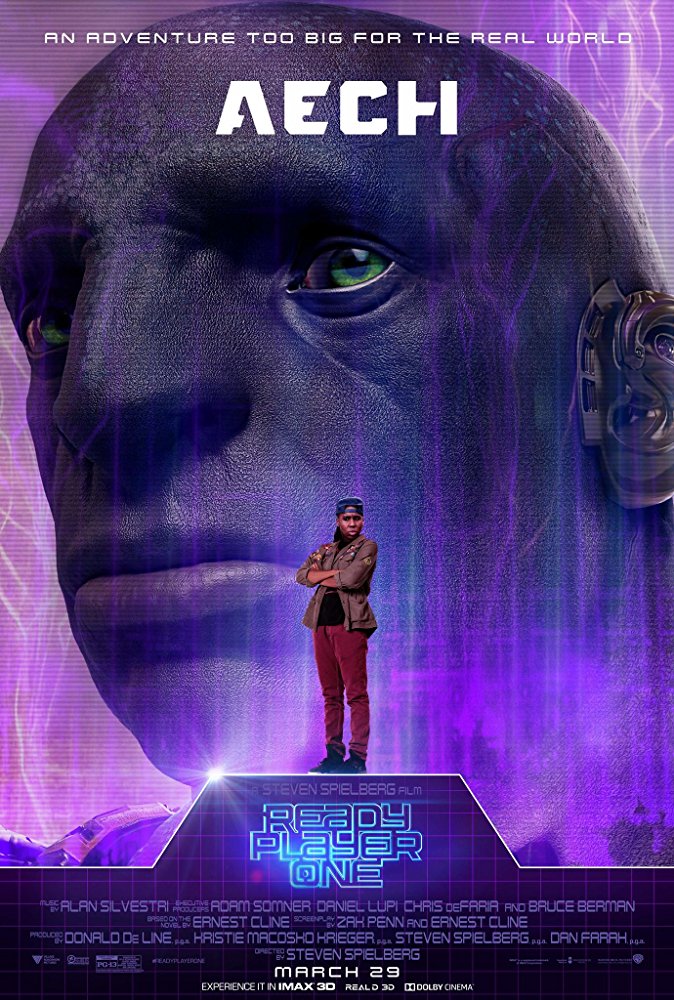 Leonardo: Wait, so Aech is you, mo-capped?

Leonardo: Oh really! I wasn’t sure about that. I assumed that was your voice, modulated, but I didn’t know.

Lena: Yup, that’s me. We all did it, we all played two characters, so-to-speak. We had these body suits on; everything we do, it’s like Avatar. They took our movements. I was also the Iron Giant, that was all me!

Leonardo: Really!? So, “Lena Waithe is The Iron Giant!” That’s probably going to be the title of this interview, by the way.

Lena: Yeah, man! [laughs] That’s why we had acting coaches who helped us with our body language. So when I moved as Aech on set, I moved differently than I did in the live action part. And the way the Iron Giant moves is very different than the way Aech moves. So, I sorta played three different characters in the movie, and a lot of that had to do with body language. And I used my regular voice on the stage and they altered it, and we went through a lot of ADR sessions to get it just right so, that way, if you don’t know the reveal, that Aech is actually me, it’ll still be a surprise. But…some people know my cadence, they’re kinda like, “Hmmmm…that sounds like Lena Waithe,” even though the voice is lowered a great deal.

But yeah, everything Aech does in the movie, I did.

Leonardo: Switching gears: I was talking to a colleague of mine about this, and I’m not sure if you’re tired of talking about it, or have spoken about it before, but…I heard that there was something unusual about your engagement gift. What can you tell me about that?

Also, by the way: congratulations!

Lena: Oh, thank you so much!

Okay, here’s the thing. We were in Tokyo, and I gave my fiancé an engagement ring, and luckily she accepted. She was like, “I want to give you something.” Now, I’m a sneaker head, and most people who follow me know that. So we were in Tokyo, which is a land of sneaker culture, it’s as prominent there as it is in New York or Chicago. I found these sneakers I really liked that you can only get in Tokyo, so I was like, “How about those?”

She got them for me, and I call them my “engagement sneakers.”

Leonardo: That is awesome!

Ok, so, with Ready Player One, and I’m not asking you to tell me anything no one’s supposed to know yet, but can fans expect to maybe see you pop up in more blockbusters like this?

Lena: You know, I don’t know. It depends. It depends on, whether it feels right, it feels special, or if it feels like, “Oh, this needs to have me in it.” I have a lot of jobs, as you know, with The Chi coming back for a second season, I’m going to be shooting a pilot for TBS which Justin Simeon will be directing, I wrote a feature that I want to get done…also, shooting a season of television as the EP and creator, there’s a need to be present and involved. So, whatever the acting gigs are that come along–and we’ve been offered some things, which has been a blessing–it really has to be special. It’s not my only stream of income, so it has to really be amazing and fantastic to take me away from my fiancé, my show, my stuff. Movies take about a couple months to get done if you’re in the top 5 on the call sheet, so, I think, for me, I want to make sure it’s something worth stepping away from all the other stuff I have going on.

Leonardo: Lena, thank you so much. And I’m definitely seeing the movie again when it comes out proper.

Lena: Thanks so much! I appreciate it.