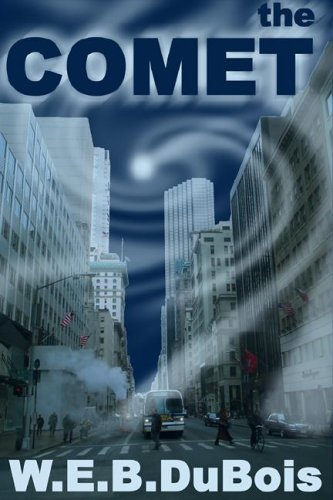 It’s not my habit to read nor review short stories. They are, as it says on the tin, a tad too short. Nonetheless, I really wanted to read The Comet, which is not only considered as a sci-fi classic but also written by one of the earliest Black American sci-fi writers–W.E.B. DuBois. I wasn’t disappointed.

Jim is a lowly employee at a bank. He is sent down to the vault to complete a task where the door suddenly closes on him. When he finally emerges from the vault, everyone in the bank and everyone in the street is dead. He will only find another person who is alive: a rich white heiress named Julia. But Jim is a Black man.

DuBois was a sociologist and civil rights activist. The Comet, one of his few fiction works, was originally published in a collection of essays and poems. As such, it is obviously a work of fiction that claims its metaphorical nature within an ensemble that aims to educate about racial discrimination in America. More than that, it can be read as a parable with a plague of biblical proportion, the comet, and an Adam and Eve in a New York full of corpses. The short story is full of symbolism, which has been extensively studied in many interesting academic studies.

Obviously, the racial discrimination is at the heart of the short story. The divide between Jim and Julia is not only a racial one but also one of class, inherent to the racial dynamics of the 1920’s.

The dynamics in the short story are extremely interesting and expose the hypocrisy at the heart of them: think you’re the only two survivors in the world and suddenly realize your common humanity! But, like an elastic band, discrimination always comes back to slap your fingers.

The ending adds both a bitter and a sweet note–bitter in how the elastic comes back and sweet because, despite it all, there is some consolation.

The Comet is a very early sci-fi novel and the science in it isn’t exactly (to put it mildly) accurate. But it’s more of a pretext for a rational explanation to the situation rather than “and then everybody just died”. By being a scientific explanation, it also adds a touch of futurism, something that came from the stars. There are no ancient powers, no mysticism, no magic. Instead, there are banks, cars, and a comet. DuBois aimed to write a story fully in the modern era and to place Black people in it. In this, he truly is one of the founders of Afrofuturism.

To the modern reader, The Comet may lack some character development. But the writing is often brilliant, particularly when Jim roams the streets of New York in search of another survivor.

But beyond that, The Comet, a story which is now 98 years old, remains an incredibly modern and engaging short story that I recommend to everyone.