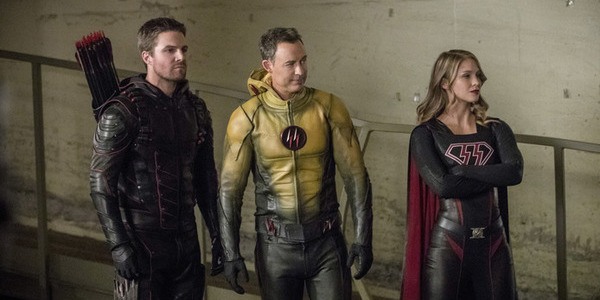 All of our faves are problematic. All of them. From Game of Thrones with its brown folks can only be slaves narrative to the Arrow/Supergirl/Flash/Legends crossover event in which Nazis were utilized as a narrative plot point; there’s no denying that many of the series that we enjoy are incredibly tone deaf and obtuse at times.

It wasn’t long ago that social media was trending the # NoConfederate hashtag in protest of HBO’s Confederate series (thank God there’s presently no movement on that proposed show). With the systemic racism that black people and people of color face in this country, many in our community found the production of a show based on the Confederate South winning the Civil War tone deaf, racist, disgusting, and unnecessary. Some even described the show as making light of black pain, trivializing it as if it doesn’t exist today.

If #NoConfederate trended because modern day black slavery narratives are distasteful, how is having Nazis killing Jewish people, spouting horseshit about superiority, and flashing images of Hitler on our television screens any better? This is a question asked by one of my BGN colleagues, Carolyn, who wrote on Twitter:

For all my followers who watch the @TheCW shows, if the #CrisisOnEarthX scenario was about bringing back slavery and Oliver, Super Girl, and Barry were slave owners would you still find it entertaining? #FuckNazis pic.twitter.com/0KMIwV7vw5

The suffering and pain of any ethnic group should not be trivialized as a narrative plot line, which is exactly what The Flash did in its crossover last week. Six million Jews died during the Holocaust. The descendants and survivors of World War II shouldn’t have to turn on their televisions to catch up with their favorite characters, only see replicas of concentration camps, Hitler’s face, and mass graves. To watch as a major network slips in the Nazi love story about Nazi Kara having heart failure and her lover, Herr Oliver, doing everything in his power to get non-Nazi Kara’s heart as a transplant feels a lot like normalization. Fans of the Arrowverse pointed out this normalization, saying:

1st of all, the normalization of nazis. Nazi Kara and Nazi Oliver were married. you heard them say “I love you” to each other several times. I don’t need to see a nazi love story. Nazis do not need ANY representation. all you need to know is that nazis are the scum of the earth.

The normalization of hate groups is something that is being discussed a lot as of late. With the present Administration giving a platform to ideologies that are violent towards women, Jews, the LGBTQ community, and PoC; there’s an active movement in our country to normalize hate. We saw it in the New York Times Nazi next door piece; we heard it in Trump’s “Both Sides” speech; and we saw the result of this normalization of hate when Heather Heyer was killed by literal Nazis in Charlottesville. That’s why having Nazis and Nazi love stories as a narrative plot point is such bullshit! The last place Nazis should show up is on a show that is the equivalent of a visual candy corn.

Turning on The Flash only to see everyone in a Nazi concentration camp. They REALLY went through with it even after Charlottesville and after that New York Times profile. Disgusting, @CW_TheFlash . pic.twitter.com/ka6wZQ8X62

Having Nazis on The Flash wasn’t only problematic because of normalization issues, but because of the visual, spiritual, psychological violence it delivered to some fans (should be all, but…). The crossover event has a Jewish character killed by Nazis (played by Victor Garber, a gay Jewish man); had a black superhero (Jimmy Olsen aka The Guardian) murdered within the first five minutes of The Flash; showed “Jewish” people walking around in those infamous striped uniforms in concentration camps; and flashed Hitler’s face in the promos as if it were advertising the Infinity War trailer.

Some might argue that the whole Nazi crossover event was meant to be empowering. That by having Jewish, queer, and people of color literally punching Nazis in the face, it is an ode to stomping out the Nazism and hate issues that are presently thriving in Trump’s America.

I came around on DC CW Crisis on Earth X crossover event. At first I was mad, but then to see a black woman and a Jewish woman beating up Nazis, was awesome.

Quite a few people on social media found The Flash and its sister shows participation in the crossover to be therapeutic. Fans suggest that all the Nazi face punching that took place in the crossover allowed them to vent their frustrations in response to the uptick in Nazism in this country. However, others argue that utilizing Nazi culture and ignoring how it impacts and continues to impact survivors has absolutely no place on a superhero series, especially if the message isn’t nuanced and the writing humanizes genocidal maniacs. The commentary that the writers were attempting to make could have easily been conveyed by creating a militant evil doppelganger (a la Stormtroopers, HYDRA, Death Eaters, etc) group instead of using Nazis, a fact pointed out by BGN colleague Jonita:

There are so many other ways they could have gone with this. I watched with my teen son and even he said, “why couldn’t they just leave it at doppelgängers. Why they gotta throw in Nazis? Why?” I agree with the boy. Why @TheCW?

This got me thinking about all the superhero movies that feature Nazi characters. Captain America and X-Men comes to mind; both films enjoyed by myself and many in the fandoms. Everyone loves Captain America and there are plenty of memes out there of the Capt. serving face-punches to Nazis. Is this just as problematic as what happened on The Flash and the Arrowverse crossovers?

Are we all guilty of ignoring or making exceptions when it comes to things we enjoy? Since people have fought and died fighting Nazism (and continue to do so), do we really need to talk about fighting them in superhero culture? Is there a right and wrong way to fight Nazis in the genre, as some would suggest? Or was the Captain America movie and X-Men/Magneto plotline dealt with in a nuanced enough manner, resulting in meaningful social commentary rather than cheapening the experiences of millions of people?

Punching Nazis in the face has a long history in comic books and served as a means of resisting fascism. Comic book artists have trended the hashtag #ComicsHateNazis on Twitter to remind fans of this fact, pointing out that comics have always “punched out Nazis.” However, on the other end of the stick, by including powerful Nazi organizations in the story-telling process, humanizing these characters, and selling Hydra tee shirts, essentially treats Nazism as a boogie man that can be cosplayed and revered as the equivalent of Darth Vader.

The CW Crossover failed to follow in the footsteps of comic artists of the 1940s with their anti-facism message. The CW’s Nazis were treated as boogie men, and the story could have been conveyed without them. BGN’s comic book aficionado, J.N. Monk, who contends that Earth-X is canon, had this to say about The CW crossovers:

I guess why I’m so bothered outside of [it] coming from legit DC lore (even if they barely used any of the best parts) is that you could’ve gotten pretty much the same results with like an Earth-3 analogue, Crime Syndicate storyline.

In other words, why use Nazis? That’s a question television and comic writers should ask themselves next time something like this is pitched.

With that being said, here’s what happened during the crossover on The Flash if you choose not to watch it.

• Iris and Barry’s wedding was disrupted in the Supergirl portion of the crossover by Nazi Oliver and Nazi Kara, so there’s no honeymoon for them this episode. In fact, they spend much of the episode separated with Barry trapped on Earth-X and Iris sneaking around Star Labs with Felicity trying to save Kara.

• Kara is kidnapped by her Nazi Doppelganger and spends much of the episode strapped to a table as Reverse Flash prepares to remove her heart.

• Barry, Oliver, and members of Legends are stuck on Earth-X in a Nazi concentration camp and meet Ray Terrill (Russell Tovey). Ray is a meta who is part of The Resistance along with his lover, Leonard Snart (aka Captain Cold). When the group of heroes escape execution by firing squad, they meet up with The Resistance led by a hardened Earth-X Winn. (The Ray has his own animated series on The CW Seed.)

• Earth-X Winn is set on destroying the multiverse gate leading back to Earth-One and refused to hold off so that the team can return home to save Kara.

• Barry and the team have to fight an army of Nazis before the multiverse gate is destroyed by Winn. A battle ensues.

• While Barry and Oliver and company work on getting back to Earth-One, Iris and Felicity team up to try and rescue Kara. With Cisco and other members of Oliver’s Team locked in the meta-human proof cells at Star Labs, it’s up to the ladies to rescue everyone.

•  While fighting Nazis, Professor Stein (one half of Firestorm) is shot and mortally wounded. Jefferson Jackson (the other half of Firestorm) merges with Stein in an attempt to save him and joins the team as they make it through the multiverse gate.

• We find out later in the Legends portion of the crossover that Professor Stein, who is Jewish, succumbs to his injuries.

While the pacing, action sequences, and stitching of this episode of The Flash with Arrow, Supergirl, Legends was well done, I gave this episode a poor rating due to the whole Nazi story arc.