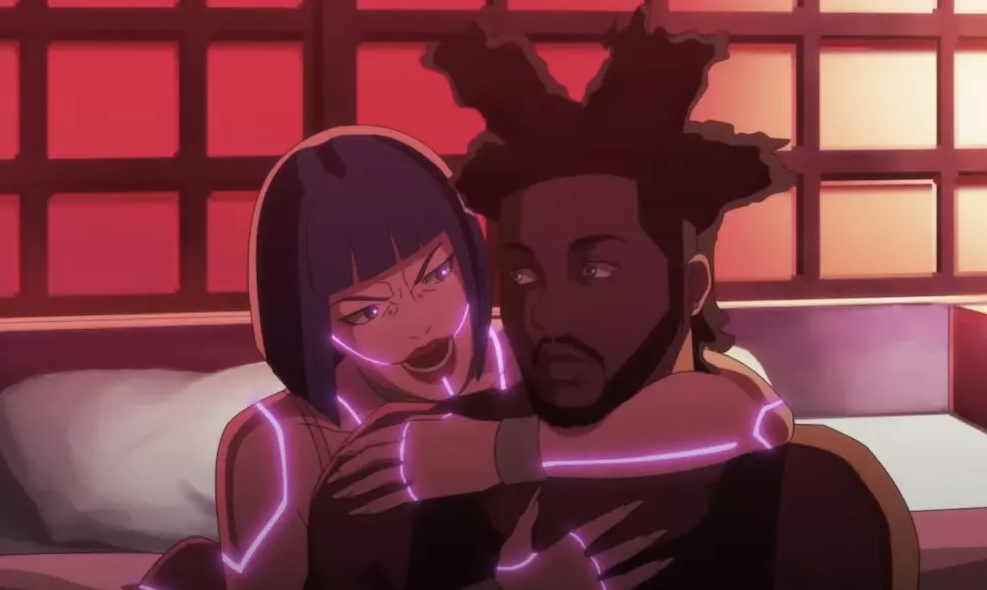 It’s no secret that anime has inspired musicians for decades, with artists like Megan Thee Stallion and Lil Uzi Vert often boasting about their love for the Japanese art style. Sometimes our favorite musicians will take that love a step further and give us full-on collaborations with Japanese artists and anime studios, producing visuals for music-loving Otakus to obsess over. For this list, we searched far and wide and compiled the best official music videos to receive the anime touch.

TWICE is a K-pop group that has been a crossover sensation since its 2015 debut. In 2018, they released an anime-themed video for “Candy Pop,” their second single from their debut Japanese album BDZ. The video has the perfect recipe for a typical shoujo, complete with bright and bubbly visuals, adorable poses, and transformation sequences. The upbeat electropop sound of “Candy Pop” sets the perfect tone for the anime imagery, which depicts Twice going to great lengths to make a young fan happy.

We could have chosen just one of Daft Punk’s cinematic anime videos, but why would we cheat you of the whole experience? After all, all 14 of these videos play like a movie, from the infectious “One More Time” to the concluding “Too Long.” The anime, officially named Interstella 5555, was directed by Kazuhisa Takenouchi. It’s a science-fiction story about a group of music-loving aliens who are captured and exploited by a greedy music executive. The concept was highly innovative for its time and is considered a timeless masterpiece by music and anime fans alike.

The colorful aesthetic of “It Girl” is everything you’d expect from VA rapper/producer Pharrell Williams, known for his eclectic style and unique, futuristic sound. The upbeat vibe of the explosive Kawaii art style is perfectly in sync with the track’s infectious groove, which will have you bopping and swaying in your seat. “It Girl” was directed by Fantasista Utamaro and produced by the animation studio Naz, the same studio that brought you the hit romance comedy My First Girlfriend Is a Gal.

In “Good Morning,” we see Ye’s mascot being put through the wringer as he fights desperately through the streets of Universe City to make it to his college graduation on time. The video was produced by Kaikai Kiki Co., Ltd., the artist collective run by legendary Japanese artist Takashi Murakami. The anime blends Ye’s lyrics about graduating and the concepts of “stepping up” with the abstract, contemporary visuals Murakami is famous for.

The melancholy singer/songwriter The Weeknd is reportedly a huge anime fan. So it’s no surprise that when he wanted visuals for his autobiographical track “Snowchild,” he sought out Japan’s first (predominantly) Black-owned anime studio: D’Art Shtajio. The video features dark, cryptic elements that The Weeknd is known for and chronicles his journey from his upbringing in Toronto to his present illustrious R&B career.

The video for alternative rockstar Matthew Sweet’s “Girlfriend” is one of the first music videos to incorporate anime into its visuals. “Girlfriend” toggles between a singing, guitar-playing Matthew Sweet and clips from the ’80s sci-fi anime Space Adventure Cobra: The Movie. Fans on Youtube thank Sweet, not just for his catchy powerpop hit but also for putting them onto the greatness of Space Adventure Cobra.

The video for Porter Robinson & Madeon’s EDM track “Shelter” is authentic anime from start to finish. The 6-minute short film was a collaborative project between Crunchyroll and A-1 Pictures, the anime studio behind Fairytale and Sword Art Online. “Shelter” is a sci-fi fantasy that follows Rin, a 17-year-old who lives an isolated life inside a virtual simulation. At first, Rin seems content with her lonely life as we witness her create and manipulate her world using a tablet. But, as the mellow electronica song plays out, the happy tale turns tragic as Rin quickly uncovers the origins of her mysterious universe.

Korean house singer Yaeji brought us a hilarious anime short for her single “Waking Up Down.” The visual, produced by Studio Yotta, shows an animated Yaeji as she tackles her grueling to-do list with the help of her adorable puppy sidekick. As the catchy dance track plays out, we’re immersed into Yaeji’s imaginative universe as we witness her get whipped into shape by quirky characters like the kawaii Coach Bird and Worm and the intense Chef Eggman. As they take turns motivating Yaeji to complete her tasks for the day, you’ll cry from laughter from the hysterically exaggerated scenes that make anime one of the funniest artforms to watch (like the infamous anime cry face).

The anime version of “Bad Habits” was produced by CALF studios and illustrated by Rui Ikeda. It depicts a tragic tale of toxicity and deceit as we see a celebrity pop star charm an unsuspecting woman into a false sense of security; what appears at first to be a once-in-a-lifetime shot at love turns out to be a trap when we discover that the male pop star in the video is actually a vampire! With its vivid aesthetics and encompassing love story, we must admit: the anime was better.

Linkin Park is a rock band that was the voice of a generation who related to their harrowing lyrics of sadness and self-loathing. “Breaking the Habit” depicts several tragic tales of toxicity, abuse, and self-harm through the lens of Studio Gonzo, the Japanese art studio behind anime films like Afro Samurai: Resurrection and Bayonetta: Bloody Fate. The video went on to win countless praise and accolades and is still a favorite among Linkin Park fans.

Popstar legend Britney Spears is known for her groundbreaking music videos. In 2009, she made all of our jaws drop with an anime-themed music video produced in South Korea. “Break the Ice” follows a superheroine, Britney Spears, as she kicks ass and takes names in an underground lab. The heroine, reportedly based on a character in Spears’ “Toxic” video, has powers that include agility, hand-to-hand combat, and a deadly kiss that paralyzes her victims.

One look at Dua Lipa’s Levitating visual, and it’s clear that someone is a Sailor Moon fan. The video oozes “Sailor Moon aesthetic” from its pastel color palette to its glowing, spinning transformation sequence. “Levitating” takes us “on a ride” into a futuristic sci-fi galaxy, just like the song suggests, as we watch an anime Dua Lipa put on a pop performance among the stars. If you’re a fan of the ’90s anime art style, you’ll really appreciate this anime-themed video brought to you by the creative minds at NOSTALOOK.

The anime-themed music video for Billie Elish’s “You Should See Me in a Crown” is another masterpiece from contemporary artist Takashi Murakami. Just as you think you’re watching a video of a dancing and singing animated Eilish, things turn dark as Eilish turns from a human to a giant spider monster who terrorizes a town and turns its citizens into her spider-human creations. If that description sounds like a nightmare, that’s because it is. The video manages to be visually stunning while also being downright terrifying.