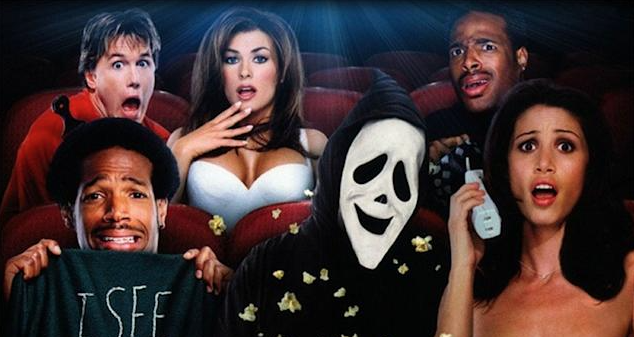 I was obsessed with seeing Scary Movie when I was a child. I had seen snippets of it every now and again, my brothers and I catching a few glimpses of its opening minutes before our mother ushered us off to our room.

At the time, the fact that it wasted no time in getting right to the fart jokes (the first one happening 43 seconds in) delighted me. What could be funnier to an eight-year-old boy? Beyond that, I had heard tell that, besides farts, there were also boobies — two of the most fascinating, funnily-named objects in a cishet boy’s life.

Farts, boobies, and everyone was oh-so-silly. Marlon Wayans’ stoner character Shorty was funny; Sean Wayans’ (highly offensive, but we’ll get to that later) character was funny; even Anna Faris’ Cindy, despite being the lead, was over-the-top. It was like a live action cartoon. If I wasn’t so interested in seeing the farts, silliness, and boobies back then, I might have even noticed the film’s score plays like something out of a classic Looney Tunes short, albeit with a scary, foreboding twist.

Sadly, in the intervening years, my excitement for the 2000 Wayans Brothers comedy has waned.

Maybe it has something to do with my discovering Judd Apatow’s films as I was coming of age. If that’s the case, then the relatively “realistic” tone of comedies like Knocked Up, The 40-Year-Old Virgin, and Superbad might have soured me towards the heightened slapstick and pratfalls of Scary Movie. In the former films, the comedy comes from the various protagonists being goofy-but-well-meaning slackers who say funny things to their equally funny friends. They are screw-ups who end the film having grown after learning a life lesson.

With Scary Movie, the comedy comes from characters more obnoxious than their horror movie counterparts dying after making jokes against queer folks and people with mental disabilities. If The 40-Year-Old Virgin has an unfortunate “gay jokes” scene the director says he would “think through” using today, Scary Movie is one long homophobic (and transphobic, and ableist, and…) bit. And it’s rarely ever funny.

Don’t get me wrong, it’s a feature-length comedy, so I was bound to laugh at something or other. Some highlights: “B.A. Corpse High School” being an unspoken background joke; Cindy’s “PG-13” cleavage being a hairy man’s chest, the sight of which sends her boyfriend reeling backwards out of a window; and Doofy (Dave Sheridan) asking a fellow officer to “smell my finger” only to learn that finger has been…well, it’s more scatological humor, to say the least.

Some lowlights? Most everything else.

I can already hear, however, some counterpoints to this argument. For one, someone might say, neither Doofy, who could be considered an offensive portrayal of people with mental disability, or Shawn Wayans’ Ray, who could be the worst gay joke of the millennium thus far, are actually either of those things. This counterargument would posit that, since the twist ending reveals that Doofy, the real killer, has been putting on a Keyser Söze-level performance, we haven’t really been laughing at someone with disabilities — we’ve merely been laughing at a neurotypical person *pretending* to have those disabilities. Likewise, the same counterpoint would say that, since Ray “comes out” as straight in the end, the humor is that he’s a straight man who just, well, “acts gay.” Both of these have their issues and by today’s standards are pretty awful.

Regardless of the twists, for an hour and a half, Scary Movie wants you to revel in the ideas that the disabled do funny things because they’re dumb and that gay men being gay is, like, hilarious. If you still don’t see the problem with that, welcome to Black Girl Nerds! I’m not sure how you got here, but I doubt you’ll enjoy the points of view.

Add to this the transphobic joke that women with testicles are the peak of comedy, and you’ll have a film that, since this is Cult Classics and part of the point is to reevaluate popular cinema, can make anyone with the least bit of empathy cringe. Of course, that leads to another potential counterpoint to my admittedly Liberal-Twitter-Outrage takes: I’m looking at this from the vantage point of 2022; a lot of non-gay, non-disabled people didn’t care about this stuff twenty-two years ago.

My response to that is simple: If I punch you before everyone knows what the word “punch” means, it doesn’t mean I didn’t punch you. It just means those outside the punched community didn’t have the language to explicate and label it yet. The same goes for transphobia, homophobia, and ableism. Just because these communities were closeted or ignored doesn’t mean they didn’t exist. Go ahead and ask Audre Lorde about that.

It’s easy to claim the world only started caring about others’ humanity in the past several years, but a contemporary review of Eminem’s The Marshall Mathers LP, released in 2000, gave the album three-and-a-half out of four stars. The reason it got docked half a star? “The recurring homophobia.” Unless the LA Times’ Robert Hilburn is a woke time traveler, I think it’s safe to say, even in its time, Scary Movie probably caused harm — and being offensive in those ways was likely the point.

To say Scary Movie isn’t hilarious in parts would be a lie, although I do suspect the film is funnier in YouTube clips than as a whole. Director Keenen Ivory Wayans is a master of sketch comedy — with In Living Color being one of the best examples of the format — so it’s impossible that certain bits, however juvenile, won’t also be wonderfully so.

There’s still an eight-year-old in me who laughs at farts, enjoys cartoonish silliness, and, yes, even wants to see…(I’m not sure how many times I should say that last word). And yet, now that I’m 29, it’s harder for me to laugh at everything else in the film. It’s just a movie, yes, but portrayal is important, particularly to marginalized communities.

Without critical scrutiny, we get less Everything Everywhere All at Once and more Mickey Rooney in Breakfast at Tiffany’s. And I think we’ve all outgrown that.