I want to preface this by saying it is important to acknowledge that “Dia de los Muertos” is celebrated differently all over the Americas and the Caribbean and also goes by different names. In some places, it is called “Dia de los Difuntos”, “Dia de Todos los Santos” among other names. While the movie Coco centers around how Dia de los Muertos is celebrated in Mexico, the essence of remembering our ancestors and celebrating their complicated lives resonates all across the board.

*This review contains spoilers for the movie Coco*

Everything about the making of Coco was messy, from Disney/Pixar wanting to trademark “Day of Dead” to having problematic folks like Lalo Alcaraz become one of the consultants for the film. I had a lot of trepidation and excitement for the movie. But after having seen it, I can say that it was both problematic and somewhat touching. Coco is about a young boy named Miguel Rivera, who wants to become a musician, but generations of Matriarchs in his family forbid any kind of music in their home due to his great-great grandfather abandoning the family in order to pursue a life as a musician. The internal struggle Miguel goes through wanting to follow his dreams verses trying to please his family is something I know most Latinx communities can relate to since pursuing the arts is never seen as a viable form of income. Nevertheless, Miguel is a very creative child and wants to follow his dreams at the risk of forsaking his family’s shoe making business. 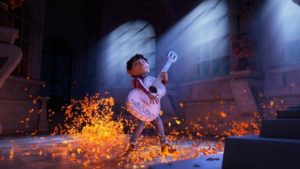 Miguel’s personal struggle ties into the family drama both in the living world and the Land of the Dead, which is arguably the strongest element of the film because it deals with the intergenerational trauma felt by the womxn in Miguel’s family and how often it’s the womxn who are the ones that deal with caring and raising their families alone. There was a moment in the film that could have voiced that genuine pain with all the feelings and intensity it deserved; the singing of La Llorona. It was ultimately sung as a duet to entertain the audience. It is unfortunate that the movie really downplays the importance of this song because the lyrics are full of complicated feelings of sorrow and resentment. But despite living through all that pain, the ability to love has not been lost. The weak resolution to this major conflict was to introduce a villain that didn’t need to be in a movie that was already suffering from structural problems as it tried to balance multiple storylines.

While the movie emotionally captured the meaning of Dia de los Muertos, it ultimately failed to explain where the origins of these traditions came from. The depiction of the “Land of the Dead” as a class-based society between the remembered and the almost forgotten was not only uncomfortable, but completely disingenuous to the complex Indigenous epistemologies these traditions are based on.

My own understanding of Dia de los Muertos is deeply connected to the concept of Ayni, which is a difficult word to translate because it’s so foundational and interconnected to our responsibilities with each other and Pachamama. The mutual reciprocal relationship we have is not only exclusive with our ancestors, but with the land and cosmos too. There is a cyclical exchange happening with our deceased relatives since their bodies are returned to Pachamama and since we ask a lot from the ground that feeds us, it’s only natural we give offerings to both the ancestors and land with the promise we will always take care of each other.

The movie does not have any sense of the spiritual aspects I mentioned and instead we are presented with a world that treats offerings like passports. We see the affluent lives of deceased famous celebrities be commemorated while the almost forgotten live in poverty. The whole depiction of the “Land of the Dead” mirrors the real world hierarchies that exist in Latin America and the Caribbean with mestizos and white Latinxs being the overwhelming majority. The 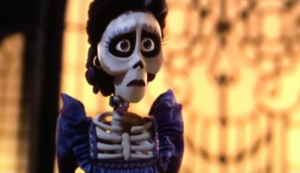 perspective is clear in the film since it views Indigenous and Afro-Indigenous people as relics of the past that no longer exist let alone make any relevant appearance in the movie.

At the end the movie, Coco is going to mean something different for everyone since there is a real desire for Latinx folks to be represented across all forms of entertainment media. The sad reality is that while we would like to think we are all in this together, the conversation surrounding Coco has shown we were never a united in the first place.

To be fair, the music was great the animation was colorful, but while there were a few things that resonated with me in the film, ultimately I didn’t feel represented. Coco is doing well in the box office so more conversations about what representation means for us are going to continue and be messy. That is why it is important to listen, share, and support voices that have historically never been included in these conversations because if these voices keep being ignored, then the representation people want isn’t inclusive at all.