Marvel’s Black Panther which premieres on February 16, 2018, takes us to a new landscape within the Marvel Cinematic Universe.  We finally visit the land of Wakanda, a territory that has never been conquered and has one of the most advanced technologies in the world.  Its major resource Vibranium, is what keeps Captain America’s shield intact and is the very resource that allows its king T’Challa to be one of the wealthiest comic book characters in Marvel.  T’Challa has two bodyguards who stay by his side at all times and are assigned to protect him.  We know them as the Dora Milaje.

Nakia and Okoye, who first appeared in Christopher Priest’s run of Black Panther in 1998, will appear in the live action film played by none other than Danai Gurira and Lupita Nyong’o.  According to executive producer Nate Moore, the story of Black Panther will be loosely based on the Christopher Priest run of the comic where these two characters are introduced.  Luckily, they’ll be dressed a bit better than the comic, I joked on my podcast Misty Knight’s Uninformed Afro, that they looked like the lost members of En Vogue.  Costume designer Ruth E. Carter tells us that the idea behind the look of the Dora Milaje as well as many of the other characters in the film, will be more of an Afro-Centric or Afro-Punk look to their attire.  These women will be dressed to kill and I mean that literally.  They have dressed appropriately like they are ready for battle as opposed to wearing high heels and mini skirts.  To give Priest some credit, their look is switched up in later issues of the series, but it’s clear that in their debut, their physical appearance was more feminine than anything else.

So let’s give some background on Nakia and Okoye, shall we? 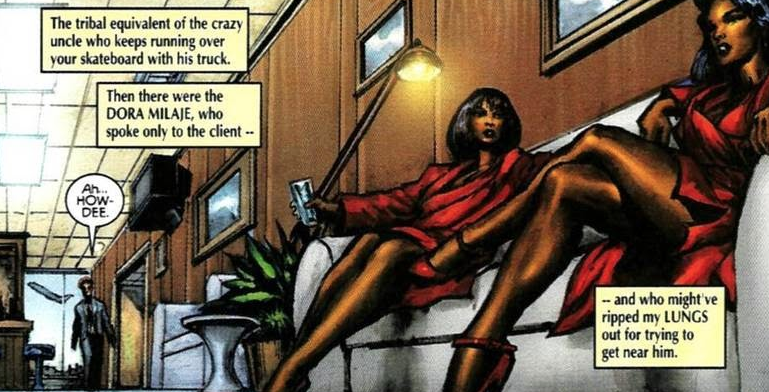 The Dora Milaje also known as the “adored ones” are beholden to their King T’Challa, but their duty is to protect him first and always.  Everett K. Ross once referred to them as “wives-in-training”.  In the comics, Okoye is T’Challa’s chauffeur and Nakia is his personal aide.  The two only communicate to their king using their native language of Hausa.  The daughters of Wakanda, Nakia, and Okoye, became the first Dora Milaje to serve under T’Challa.  In Black Panther Vol 3 Issue 3 (1998) by Christopher Priest, T’Challa undergoes a hallucination initiated by Mephisto and T’Challa begins making out with his girlfriend at the time Monica Lynne.  However, due to the hallucination, it’s not Monica he’s actually kissing, it’s Nakia!  Nakia begins to grow an affinity for her King and romantic feelings begin to develop.  Okoye, the voice of reason among the two; advises her that it’s in violation of their duty to the King by harboring romantic feelings to the Black Panther. 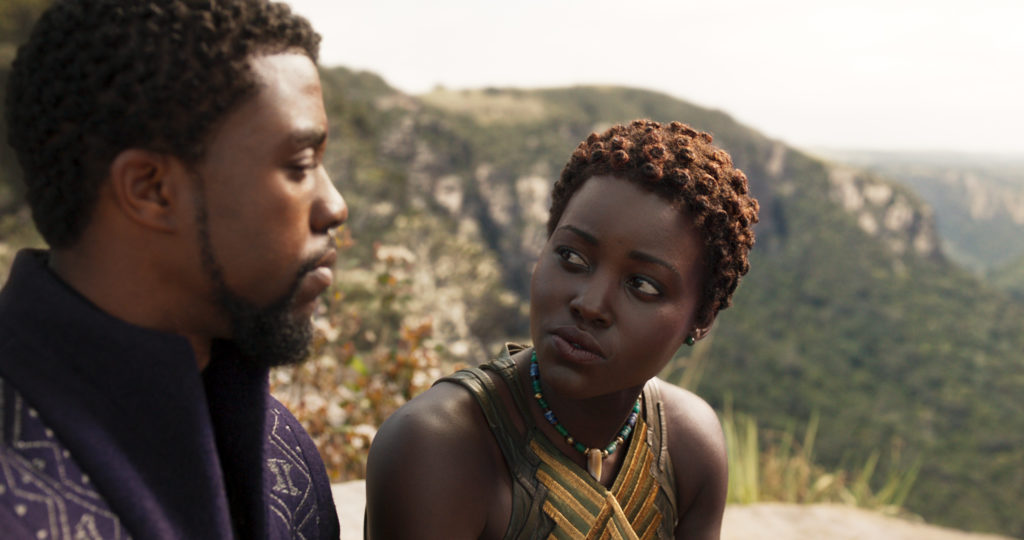 As I mentioned before, T’Challa has a love interest by the name of Monica Lynne in the comic books.  The biggest question is will we see Monica in the Black Panther movie?  When I asked Chadwick Boseman if we can expect any kind of romantic relationship for T’Challa he kept it pretty tight-lipped.  So at this point, since no casting announcement has been made for the canon character; we can only assume she will not be present in the film.

In our set visit interview with Lupita Nyong’o who plays Nakia, she describes her character as the following, “a woman who is a war dog and one of Wakanda’s CIA agents. Her job is to spy around the world and report back to Wakanda, to keep Wakanda safe, and to keep Wakanda informed.”

The Black Panther film will take a bit of a departure from the comics, but Nate Moore has told us in our set visit interview that this film is influenced by the Christopher Priest run of the comics.  Lupita tells us the following about how this film compares with comic book canon.

“I would say that in what Ryan and Joe Robert Cole had done with this film is that. They’ve really deepened our understanding of the role of women in Wakanda. and so I can, I think it’s legal for me to say that the women as we meet them are departures from what we know of them in comics.”

Lupita uses the term “legal” here because, at the time of this visit, the cast were under strict guidelines to only disclose certain aspects of the characters and story.  Lupita’s description of Nakia as a war dog is also the same description Danai Guirra gives us as Okoye who also describes her character as a war dog but also as a General.  When she told me the similarities between comic book canon and the film, here is what she had to say,

“I loved how we were doing something kind of different from what you see in the first … The Christopher Priest version versus the Mr. Coates’ version, which you know, we tended to pull from more right through to the hair … The style of the tattoos and no hair. Whereas in Mr. Priest’s version we had the perfect little black dark and lovely bobs. I really like the way they played off of elements of how to make them a lot more developed I think than what they were in the original Christopher Priest version of the comic book. It was really interesting to see how the journey of the story … Or the evolution of the story has come about. But of course, the really fascinating what Mr. Coates has been doing most recently.”

There are stark differences between the look of the Dora Milaje between the Priest run and the current Coates run.  As well as Coogler’s film. Nakia and Okoye have relaxed hair, in a long bob and are wearing red tight mini skirts with high heels.

In both the Coogler film and current Coates run, both women’s heads are bald with tribal tattoos and markings on their face; and wearing suited armor ready for battle.  This was also a similar look in the Reginald Hudlin run of Black Panther.  We also see another Dora Milaje in this film by the name of Ayo, who is played by Florence Kasumba.  We know her best as T’Challa’s guard in Captain America: Civil War who’s infamous line “move or be moved” made waves on social media.  She will also play a pivotal role as a trained member of the Dora Milaje.

In the series World Of Wakanda, Ayo has her own story along with her colleague Anika who we later find out are secretly attracted to one another and become lovers.  It is one of the few if not only Marvel stories that feature queer Black women.  The book is also written and drawn by Black women.  Roxane Gay, also a queer Black woman, co-wrote the book along with Ta-Nehisi Coates.  The artwork through various issues was drawn by Afua Richardson and Alitha E. Martinez.  Whether or not we will see a story arc that will address Ayo’s queerness in the film is to be determined.  If Marvel wants to continue to reflect diversity in its films, using the World of Wakanda arc for Ayo would be a fantastic start.